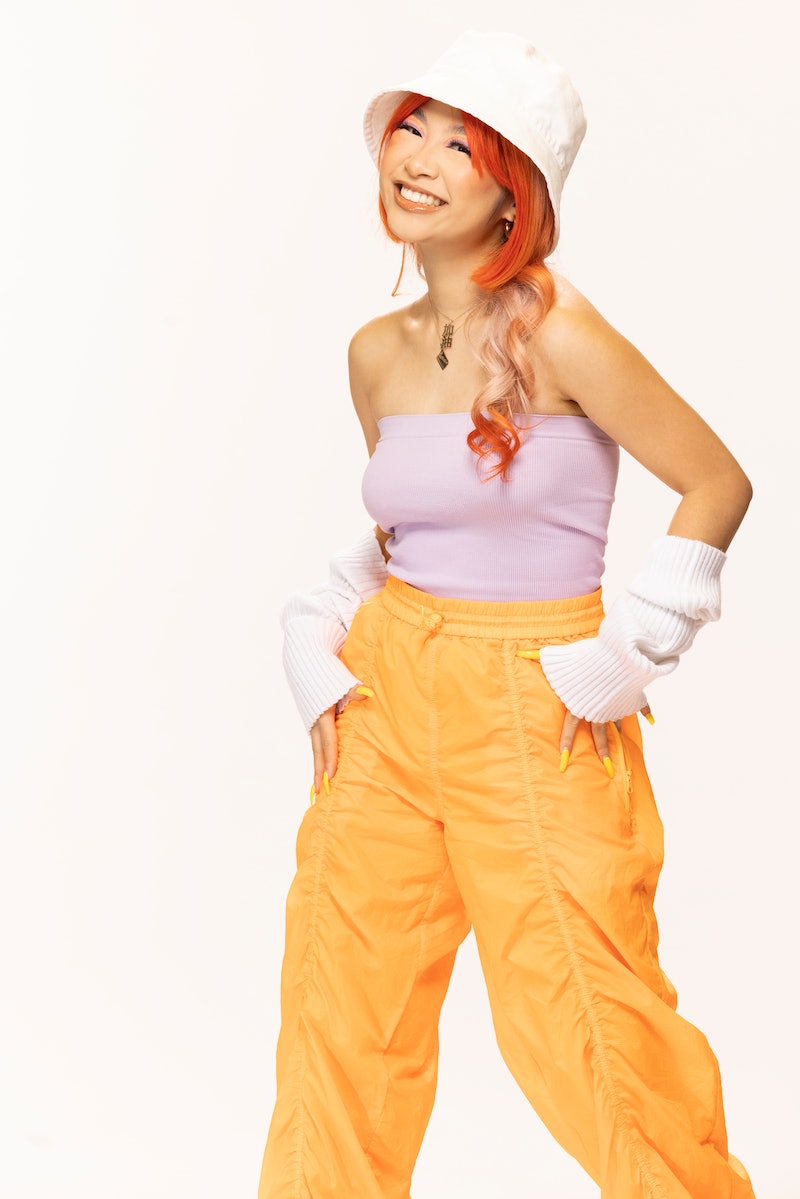 Netflix original reality series The Circle dropped its fourth season in early May with a new cast of catfish and cuties, and you need not read further to figure out who I’m rooting for: Yu Ling Wu. At four feet, six inches (plus a quarter inch), she describes herself as a “fun-size, firecracker.” Within minutes of the opening credits, Wu captivates — first with her witty banter, then with her unique style.

Every episode she delivers something new — from Ronald McDonald-chic overalls and a rainbow of berets to a full face straight out of a YouTube beauty tutorial and electric red hair that somehow matches each ensemble perfectly.

It’s not just how Wu styles herself, however, that is making a splash on screen. She carries herself with such confidence that it’s almost intoxicating to watch. Here, the reality star chats with Bustle about Y2K fashion, confidence, and cultural identity.

Your style is so unique — how do you find inspiration?

Because I’ve always been tiny, that plays a big part in how I ended up developing the fashion sense that I have now. In some ways I felt like I had to overcompensate. I'm the first thing you sometimes notice in a room. You scan the room, everyone's equal height and then you see this dip and you're like, "Oh, my God, who is that? What child is at the club?" And so a big part of it was originally like, "Whatever I end up wearing, I want it to be extra loud, extra colorful, and I want it to capture your attention."

Also, in part, growing up first generation, my mom was like, "We're not buying any new clothes for you. You're wearing your sister's hand-me-downs." So I need to get creative with whatever I'm wearing, which is also why I'm perpetually stuck in the '90s. It felt eclectic. A lot of these hand-me-downs were off-brand things. It should say, ‘The Gap,’ but it would be ‘The Gop’, ‘Winnie the Pooh’ would be ‘Winnie the Poop’. It would be kind of humorous. As I got older, I wanted to keep some of that with me, so the colorfulness, the playfulness, it all goes hand-in-hand. It is very mix match. And my mom has that Asian mom aesthetic — they just throw on prints. So I think that ended up moving into my fashion sense, which can be random, loud, colorful, and printed.

How do you feel about the whole Y2K resurgence as a "Millennial/Gen Z cusp"?

I'm a big fan. Those years, in particular, are when I was most aware/conscious of fashion. I just missed the super '90s. I feel like the 2000s is when I was really deep into MTV, VH1, “Flavor of Love”, “I Love Money” — those shows definitely influenced me. I used to watch TRL all the time, so it was Britney [Spears], Justin [Timberlake] or Gwen Stefani. It's interesting to see that these things are being recycled, because now we're literally in 2022. Some of the combinations that came out of Y2K were like, "What are they wearing?" The whale tails, the low rise, Juicy Couture and Ed Hardy — I think that's what we're leaning hard into as opposed to the Ashley Tisdale layering.

How does being from the Bay Area influence your style?

The fashion in San Francisco is very relaxed. We're very chill. No one really gives a f*ck about what you're wearing. I think it's more sort of casual and just jeans, flip flops, T-shirt. I would say what inspires me most is the street fashion. That laid-back, effortless, cool attitude. But I think that the architecture of San Francisco and the colors are what really inspire me. Whenever I say, "I'm from San Francisco," people say, "That makes sense." I guess it's because the city is kind of quirky. It's silly. It's cute. The biggest inspo is that I would always be in Chinatown. There's that ‘Chinatown pretty.’ I think a mix of that aesthetic is cultural — pulling from some of the elders that I've always been around.

How does your identity as an Asian woman inform your style?

It's so hard because women of color just can't win. If I want to dress a little bit more scantily clad, then sometimes it can feel like, "am I hyper-sexualizing myself?" I know that I'm going to walk down the street and someone's going to call me their "oriental princess dream." Then there's also that feeling of wanting to cover up and be smaller. I know I'm physically small, but also just smaller in all aspects, like, "don't look at me, I'm just trying to blend in.” That push and pull of identity really informs how I dress. There are times that I want to be extra loud to break through that stereotype of, "we're quiet, we're subservient." I've moved through a lot of the shame that I used to feel around my Chinese culture and put that into play with a lot of my fashion.

Is that something that you kept in mind as you were curating your style for the show?

I wanted to show that fashion and beauty has the ability [to] transform and it can be different every single day. There doesn't have to be anything cohesive about it — I can't just describe myself as boho chic or street style. There's so much inspiration and mix that comes into play. And I think that we're allowed to do that.

What is it like to choose an outfit by yourself and and know that it's going to be viewed by millions of people?

I have a YouTube channel and do a series called Styuling. Usually I'll take a picture of an outfit and send to 17 of my friends asking, "Is this cute? Do you like this?" In the end it was just, "If we feel good in it, then we like it, then we're wearing it." Who cares if other people don't like it? If I feel good in it, then that's all that matters. I might get roasted on the internet, but as long as I enjoy it, then whatever.

Do you match your hairstyles to your outfits? Because it felt like your hair was intentional — especially with that first look, the jumpsuit.

I was surprised how coordinated that looked. Because I was like, "Is the red and the orange too much?” It's actually called a hime cut in Japan, also known as the princess cut. I did not coordinate, but weirdly enough though, orange is so out there that it almost works with everything. If I had blue hair, it could have clashed even more. But I feel like it was so out there that it somehow went with everything.

Are there any fashion tricks or trends you’re currently obsessed with?

A lot of people are asking how I shop, because I'm teeny tiny. I do shrink a lot of my clothes and I buy exclusively crop tops sometimes. Tailoring is my best friend. And I will say, that the Zara kid section — sorry, to be shopping fast fashion, but they pop the f*ck off. Aritizia has a pretty good size range. Those are the two places that I go to if I need good staples. But always, always shopping vintage and tailoring clothes is the number one way to go.