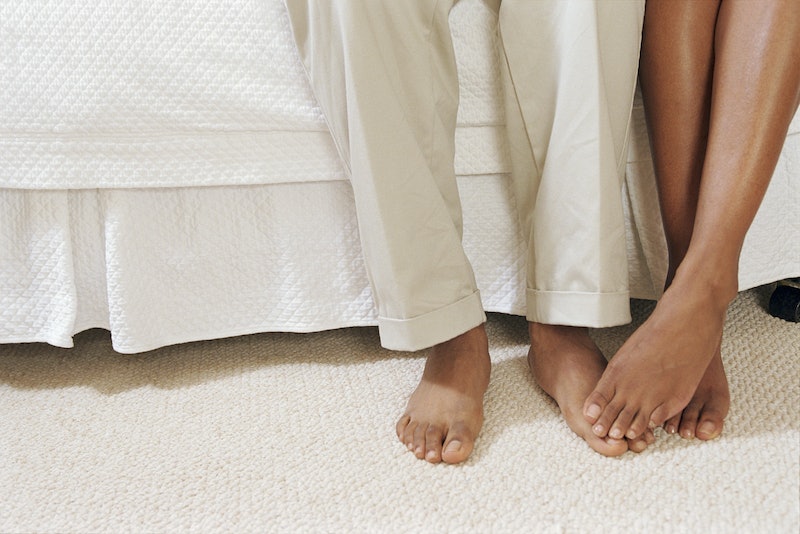 I’ve never been one to demand that any man I meet have a big penis. After all, penis size isn’t something that typically crosses your mind until you have something outside of your usual experience to compare it to. But then I had sex with someone who had a small penis, and my frame of reference for “big” and “small” changed.

But what, exactly, is considered average? One article in the Journal of Sex & Marital Therapy reviewed over 30 studies where researchers had previously measured penis length, and determined that the average erect penis is between 5.1 and 5.5 inches in length. They noted, however, the average length is probably on the lower end of that scale, to account for volunteer bias in the studies. The same paper notes the reality is in stark contrast to what most men consider average length: they assume most penises are bigger than six inches when erect, even though the science tells us this isn’t the case.

And there’s not a whole lot of data out there to suggest that people who identify as women are all that concerned about small penises, either. One article in European Urology found that of the participants surveyed, “55% and 22% of the women found the length of the penis unimportant and totally unimportant, respectively.” A newer study noted that while women tended to prefer slightly larger penises for one-time hook ups as opposed to longer relationships, they still only preferred penis lengths that were just slightly above average.

But back to my encounter. I never actually measured, but for guesstimation purposes, I’d say that his erect penis was a little longer than my thumb (under two inches) in length, and maybe a little larger than a roll of quarters in girth. So, considerably smaller than the average penis. I stuck around for a few months to figure out how to tell if good things come in small packages. Here’s what happened when I had sex with the small-penis guy.

1. I Was Initially Surprised

I think I’ve gotten to a point where, like many of us, I’m desensitized to most things. However, when I reached down to touch his penis that very first time, I was surprised and confused about what I found, given that I'm accustomed to having sex with people of a more typical size. So I made my move south for a closer look, and even in the dimly-lit room, I could see that sex with him would be way different than what I was used to.

I know, I know. It’s a horrible thing to even think, let alone say, but sometimes I really had zero clue as to whether or not it was in there. I’d even clench my muscles, as if doing a Kegel, to see if I could feel it. And even then, I wouldn’t be totally sure. I’d have to subtly reach down, pretending I was stimulating myself for extra fun, to feel out if he was inside me or not. This was most especially the case in the missionary position.

3. We Did A lot Of Doggy Style

Doggy style was literally the only position in which I could actually feel him a bit. In fact, it got to the point that we only had penetrative sex that way, because I was legitimately scared that I’d accidentally ask at some point, “Is it in?”

4. I Became A Master Of "Deep Throating"

To be honest, even with his entire penis in my mouth, there was no deep throat action going on, as he barely even reached the spot that induces gagging. But he loved that I could “deep throat” him, to use his words. Although no other guy has said it since, because I just can’t do that with anyone else.

6. It Was The Only Time I Actually Loved Receiving Oral Sex

I don’t like getting oral sex. Never have, and never will. However, this guy gave oral sex like you would not believe. I realize that every woman who’s ever been with a guy who has a small penis says the same thing, but it’s true. Not only was it fantastic, but he wanted to do it all the time. Which was awesome, because I wasn’t getting any sensation from intercourse. It was just … WOW.

7. I Realized That Saying It Was "Big" Was A Very Bad Idea

Although I’m sure that every person with a small penis is well aware of their shortcomings (pun!), I can’t imagine that many discuss it, or even want to bring attention to it. But this guy was very open about the fact that his dick was small. It wasn’t like he talked about it all the time, but it’s not like he ignored it, either.

But it was the first time he mentioned his size that things got awkward. I didn’t know what to say. Do I tell him I’ve seen smaller? Do I say that it feels bigger than it looks? What does a woman in this predicament do?!

So, being the occasional idiot I am, I said, “What are you talking about? It’s pretty big!” This, of course, led to an argument about how I was lying and just trying to make him feel better. Which was true, but what else was I supposed to say?

I realized then that some things just don’t need to be discussed, ever. Especially if you’re just trying to be nice and it’s a total lie ... and it's about penis size.

More like this
I'm 42 & I've Never Had Sex. Is It Too Late?
By Sophia Benoit
Help! My Partner Only Wants Sex Late At Night & Won’t Compromise
By Sophia Benoit
15 Flirty "Thinking Of You" Texts That’ll Make Your Crush’s Day
By Lexi Inks
This TikToker Has Genius Advice For Boosting Your Dating Confidence
By Lexi Inks
Get Even More From Bustle — Sign Up For The Newsletter

This article was originally published on Oct. 16, 2015