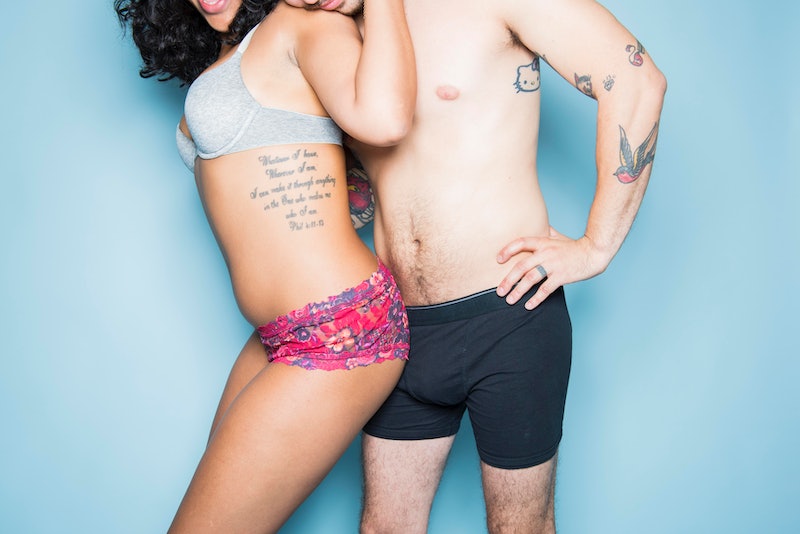 But, honestly, as much as men seem to be all about having a small penis, women aren’t too concerned. According to a study published in the British Journal of Urology International, while 45% of men think their penis is too small, 85% of women are totally satisfied with the size of their partner’s dick. But what even counts as a small penis?

Still, no matter what size a person's penis is, chances are what they're doing with it can bring both them and their partners pleasure (and, it's non-pleasure-related functions should be working just fine). If you find yourself in bed with someone with a smaller penis, here's what you should know.

A 2014 study found that when it comes one night stands, size actually might matter — but it found that girth, not length, was the most important metric. One reason for this is that the pleasure derived from a penis-in-vagina (PIV) one night stand typically has to do with the, erm, intensity of the hookup (that's code for wanting to really get pounded), while sex in long-term relationships benefits from deeper communication about each partner's likes and dislikes. For any partnership that involves a penis, it takes practice and finding the right positions, therefore making it better suited for a long-term relationship where emotions and feelings are involved, too.

"Even when making love, there is a lot you can do to ensure that your partner enjoys the experience," Dr. Morrison says. "This generally involves being romantic, making time for foreplay, and including sufficient clitoral stimulation."

“Only a small percentage of women orgasm from stimulation of the cervix,” Dr. Stanton Honig, MD, a Yale Medicine urologist and director of Male Urology, tells Bustle. For most women, “[Size] probably doesn’t matter. It likely be just as good in most cases.”

2. Circumcision Can Change How A Penis Is Perceived

Although circumcision is popular in the United States, in the rest of the world (aside from those who are circumcised for religious reasons), it’s much less common. While the pros and cons of circumcision is an ongoing debate, when we’re talking about penis size, at least in regards to appearance, it does make a difference.

“Circumcision is the removal of the foreskin, leaving the 'glans' exposed,” Dr. Morrison says. “When flaccid, a circumcised penis may look slightly smaller than a non-circumcised one, because there isn't the extra layer of tissue covering the glans. However, when erect, the foreskin retracts and is almost invisible, so in regards to size, there isn't any appreciable difference in how the penis looks.”

While it would be great if men were given the option to be circumcised or not circumcised, especially considering how many nerves are lost in the removal of the foreskin, that’s typically not the case.

3. Penis Anxiety Happens At All Sizes

“There is a tendency for men to think their penis is smaller than it actually is, because it will look smaller from above,” Dr. Morrison says. “Also, having a relatively small penis is actually very common, and indeed, more common than having a very large penis.”

In fact, a 2013 study found that 30% of men who have average or even above-average penises are disappointed in its size, too. If size anxiety is affecting your partner or your sex life, you can talk to a couple's counselor about ways to move past it together.

4. Less Than 1% Of Men Have A Micropenis

When we’re talking about small penises, it’s hard to not address the micropenis. According to research, the smallest of all small penises is medically known at a micropenis — but they're incredibly rare.

"About 0.6% of men have a micropenis," Dr. Morrison says. "This condition is generally recognized at birth or during infancy, and it means that the penis is unusually small.”

According to Dr. Morrison, once a man reaches adulthood and his penis has essentially stopped growing, having reached its “biggest” size, a micropenis is then “characterized by an erect penile length of less than 7 cm (2 3/4 inches)."

5. Best Sex Positions For A Small Penis Make It Pleasurable For Both Partners

With only 20% of women being able to have an orgasm from penetration alone, you might say that the penis, at any size, is the least important part of penis-in-vagina sex.

“To increase penetration with a short penis, it can help to make love from behind,” Dr. Morrison says. “For example, doggy style. On the other hand, if you prefer face-to-face, try elevating the woman's legs towards her chest, to allow maximum penetration. It's worth experimenting with different positions to see what works best.”

In addition to doggy style, there are other specific sex positions that can feel nice for the receiving partner. For starters, “X Marks the Spot,” and “The Splitter,” allow for deeper penetration, as does “Tighter Doggy,” “Lowered Doggy,” and “Sofa Brace." Basically, any position that involves penetration from the back or, if it’s face-to-face, includes elevated hips or legs, as Dr. Morrison points out, a small penis can feel amazing.

An interesting fact about penises, is that they’re not always the same size. “Depending on your race, ethnicity, and age, your penis can change in lengths during the day,” Dr. Shaw says. “The penile chambers that fill up with blood during erections are called the corpus cavernosum. People will lose length due to age, diabetes, cholesterol, blood pressure, and hypertension. The arteries, veins and smooth muscle can atrophy (shrink!) secondary to these medical issues.”

This is important to know, since it could point to bigger health issues. “If you’re losing length, it could be a sign of cardiovascular disease,” Dr. Shaw says. While one shouldn’t rely solely on the length of their penis to determine whether or not they have any form of heart disease — regular checkups are best for that — it's a good reminder to stay in touch with your body.

Ultimately, no matter what size the penis, sex is about thinking outside the box. When it comes to penises of all kinds, it’s all about being creative to make sure it’s enjoyable for all partners.