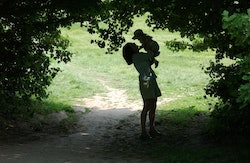 Even the most chill relationships between mothers and daughters have their bumps in the road. It's pretty much impossible to always be on the same page as the people who raised you, especially as you get older. But if your conflicts with your mother seem to go beyond what's typical and into an area that leaves you feeling sad, helpless, or bad about yourself, then you might have a toxic mother. Maybe you find yourself asking: why is my mom so mean? This kind of fear can leave you feeling as if the troubles between you are your fault, but it might be your mother who is toxic.

A toxic relationship is one based around anger, emotional manipulation, and other negative and hurtful feelings, instead of mutual support. Toxicity in a family dynamic can be a hard thing to stomach, experts say. "It’s important to remember that growing up with a toxic mom is very difficult," therapist Heidi McBain LMFT tells Bustle. And the issues can continue into adulthood, even long after you move away from home. Your mom is one of the first, most formative relationships you have – if there’s toxicity there, it’s likely to impact your self-esteem and other areas of your life. You can't exactly dump your mom and then jump online to look for a new one, and the guilt and blame that society places on the shoulders of children who are estranged from their parents can often feel like motivation enough to suffer in silence. Those early experiences have a lasting impact. In the 2011 study “Poisonous Parenting: Toxic Relationships Between Parents and Their Adult Children”, the authors note that a toxic mother-daughter relationship can lead you to form unhealthy relationships later in life.

If you think your mother might be toxic, then read on for six of the most common signs.

1. Your Mom Dismisses Your Negative Feelings

It can be hard to have compassion for yourself when your mother took care of your physical needs but ignored your emotional ones. A 2014 study published by the American Psychological Association found that children who suffered from emotional abuse dealt with the same rates of anxiety, depression, low self-esteem, and suicidal impulses as children who had experienced physical and sexual abuse.

Emotional neglect from mothers can have lasting consequences. As Peg Streep, author of Mean Mothers, put it in Psychology Today: "Daughters raised by dismissive mothers doubt the validity of their own emotional needs. They feel unworthy of attention and experience deep, gut-wrenching self-doubt, all the while feeling intense longing for love and validation."

2. Your Mother Thinks That You're Responsible For Her Happiness

"A mom who always put herself and her own needs before those of her family is a sign of toxicity," McBain says. "This can be very confusing and unhealthy for kids who aren’t getting their needs met by their own mom." If your mother always makes you responsible for her good moods, it can feel as if your mom doesn't love you for what you are, but what you can do for her.

As therapist Daniel S. Lobel, Ph. D., wrote in Psychology Today, some toxic mothers "see their children as forever obligated to them by rite of birth. They feel entitled to demand from their children unlimited support and service." These mothers are searching for the root of their unhappiness, and falsely believe that it lies in their child's refusal to give in to every single one of their demands.

3. Your Mother Doesn't Respect Your Boundaries

We often think of toxic mothers as ones who are overtly cruel. If your mom is your best friend, you might not see her as toxic, even if your own needs aren’t being met. Mothers whose toxicity comes in the form of refusing to allow their child a separate identity are "enmeshed," according to psychologists. As Tom Bunn, LCSW, wrote in Psychology Today, this kind of toxic mother "sees natural and healthy growth [of her child's independence] as rejection."

Toxic mothers can disregard boundaries in hostile ways, like punishing you for making decisions without them. But they can also disregard them in ways that seem loving, too — like by always jumping to be by your side and offer assistance the second you have any problem (whether you want them there or not). This could lead you to wonder why your mom seems to hate you and love you at the same time. It’s OK to set boundaries with a toxic mom who oversteps. Sometimes, you need a parent, not a best friend.

4. Your Mom Can't Deal With Not Being In The Spotlight

It's a sexist myth that all mothers must be so self-sacrificing and egoless that they no longer care about their own interests, opinions, or achievements after having kids. But if your mother is focused on making sure that everyone pays attention to her, at the expense of showing any interest in you, then you are probably dealing with a toxic relationship. "This may be someone who has a pervasive personality disorder like narcissism where she felt like everything was about her and revolved around her," McBain says. This kind of toxic mother can make their child feel as if their needs or opinions have no worth.

5. Your Mother is Cruel

Sometimes, toxicity is hard to spot — so subtle that you're not sure if it is really happening. But other times, it's pretty much all out in the open. "A mom who was angry most of the time, and never worked through her anger issues, can make home life very unstable," McBain says. "Kids can blame themselves for their mom’s anger (or mom can make it seem like it’s the kid’s fault)." And the anger can also be directed at children, including name-calling, mocking, or ridicule. It can also mean your mother is negative and depressing.

As Dr. Richard A. Friedman, MD, a professor of psychology at Weill Cornell Medical College, wrote in The New York Times, "the assumption that parents are predisposed to love their children unconditionally and protect them from harm is not universally true." Friedman also noted why we're likely to stick with a cruel mother: "Research on early attachment, both in humans and in non-human primates, shows that we are hard-wired for bonding — even to those who aren’t very nice to us."

6. You're Scared To Stick Up For Yourself Against Your Mom

Living with a toxic mother can be very confusing, McBain says. "Children don't know which mom they are going to get on a given day." That can impact self-esteem in the future, particularly if establishing boundaries or saying no has produced tantrums or pushback in the past. Even if you don’t live together, their cruelty and toxicity might seep into your adult life and impact your relationships with them and others.

Figuring out how to protect yourself and flourish with a toxic mother can be difficult — but therapy can help. "Therapy can be a great place to process your feelings surrounding the home life you grew up in, come to terms with your mom’s possible mental health issues, and learn to not blame yourself for someone else’s unhealthy behaviors," McBain says. If you decide that the right thing for your own well-being is to stop talking to your mother, then don't believe that doing so makes you an awful person. You're doing what you need to do to take care of yourself; you're just someone who's been dealt a rough hand, and odds are you're trying to do the best you can with it.

This article was originally published on November 16, 2015