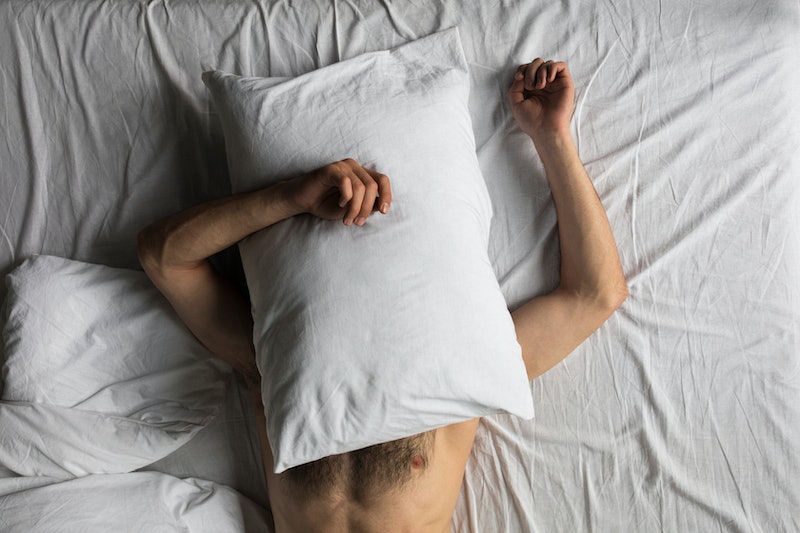 When it comes to sex, it can sometimes be difficult to understand what things feel like for the other person, or why people enjoy certain things in bed. Blow jobs, no matter how common they may be, are certainly no exception. It’s only natural to be curious about what a blow job feels like.

There’s also an element of vulnerability at play during blow jobs. According to sexuality educator Sarah Sloane, fantasy is also a big part of it for some, and orgasming may require a combination of both physical sensation and mental headspace. For some people with penises, orgasming from a blow job just doesn’t happen.

While some things just can’t be put into words, 12 people gave Bustle the lowdown on what they think blow jobs feel like and why guys like oral so much.

2. Some Think Blow Jobs Are Degrading To Their Partner

"To me, oral stimulation feels degrading to the woman and I don't like it because of that. I think the most attractive feature of a woman is her face and I'd rather see it light up in ecstasy than look at the top of her head."- Todd, 57

3. Some Feel Oral Sex Is Similar To Intercourse

"To me it feels like intercourse without some of the muscle control that a vagina provides. And many times it depends on the woman performing the stimulation ... To be more specific, like a vagina, the mouth is hot wet with a hint of the teeth. And if you get deep throated, then it’s like hitting the back of the vagina. The saliva and vaginal moisture are identical in lubrication, so you see how it’s comparable." -Robert, 54

4. Some Think Blow Jobs Are Like Getting Your Nipples Sucked

"It feels warm and wet like a vagina — while lacking the tightness (much more subtle), but having a lot of other contact and motion (especially tongue), and generally being very gentle and undemanding of the man's body. It's kind of similar to getting your nipples sucked, but better, less intense, and over a much larger area with more motion. There are emotional and visual components that contribute a lot to it too." - Shawn, 30

5. Some Enjoy The Intimacy Of Blow Jobs

"If the [person giving the blow job] is able to completely create a vacuum, the suction created during the orgasm is unsurpassed. By far, my best O's were from BJs. However, I prefer PIV [penis-in-vagina] sex more. The intimacy is king." - Eric, 25

"Most likely, [a blow job is] very much the same as when a man sucks your clit and licks it. However, our parts aren't the same enough to give you a perfect example ... The best was from my wife because she enjoys making me feel good. She'll play with my dick and balls on her own, even while watching TV." - Jason, 32

"For me, I prefer a blow job over anything. Everyone is different but I like it when someone just goes wild. It's really boring if someone just does the whole stick-it-in and go back-and-forth. You gotta suck, lick, and tickle every part. Tickle the balls too. Licking the tip can tease the guy pretty bad, too. If you really want try giving him a treat, then try deep throating. But that's only if you can handle it." - Mark, 36

8. Some Think There’s Nothing Better Than A Blow Job

"Well, I guess they feel like your penis is in someone's mouth. That's why we like them so much." - Matt, 24

"The intense sensations, the feel of a warm, wet mouth sliding up and down your [penis], and then the explosion of an orgasm just feels so good. My best experience was from a friend of mine recently. She had been teasing me about it for years and I never had the pleasure from her until one day ... She quickly took me in her mouth, deep throat-style, and soon she was working a nice easy rhythm. I was in heaven. It was all enhanced by the tongue piercing she had ... Boy, that was the best blow job I have ever had. Well worth the wait." - John, 43

11. Some Enjoy The Post-Orgasm Sensation

"I actually love the sensation of a hard sucking on my [penis] just after I've come, as opposed to the sucking leading up to the coming." - Kevin, 29

12. Some Think Blow Jobs Can Give You The Most Intense Orgasm

More like this
My Partner Wants Me To Wear A Diaper During Sex. Help!
By Sophia Benoit
18 Hinge Prompt Answers To Try If You’re Looking For Something Casual
By Lexi Inks
12 Active Date Ideas That'll Get You & Your Boo Outside
By Lexi Inks
TikTok's Voluntary Celibacy Trend Has Sparked A Movement
By Lexi Inks
Get Even More From Bustle — Sign Up For The Newsletter
From hair trends to relationship advice, our daily newsletter has everything you need to sound like a person who’s on TikTok, even if you aren’t.

This article was originally published on June 22, 2015