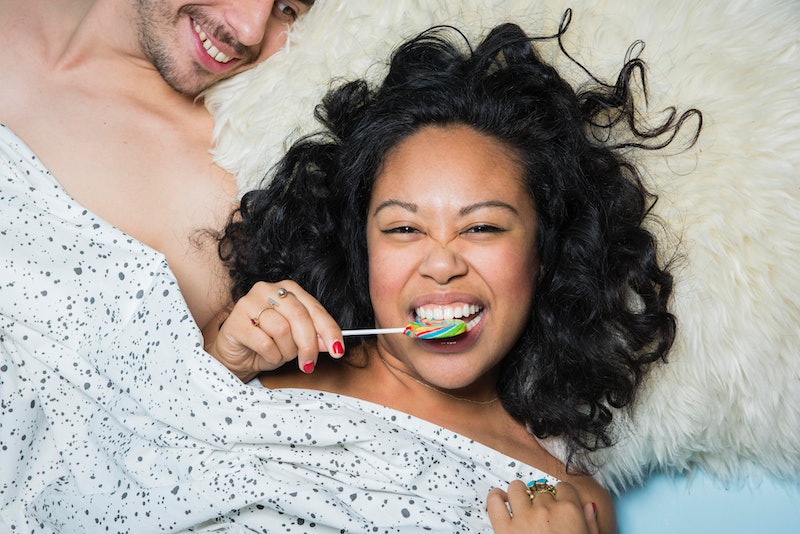 I have always maintained that giving a blow job is not something to go into half-ass, but 110 percent. If you’re not willing to give it 110 percent, for whatever reason, then what's the point of doing it? And I’m sure many people who have been subjected to sub par blow jobs would agree. Think about it this way: Would you want someone to go down on you and only give you 50 percent? You want your partner to enjoy the experience too.

While everyone is different in their giving technique and what they prefer on the receiving end of things, there’s definitely some common no-nos when it comes to giving oral. Just like there’s a list of "please don't"s when it comes to giving oral to a woman―I can’t imagine any woman wants someone down in her vagina chomping away, forcing her to fear for the future of her clitoris. Or maybe some do; no judgment here.

It's always a great idea to spice up your blow job technique, but when it comes down to it, there are certain things you should just avoid (unless you've discussed them with your partner). Here are nine things he probably does not want you to do while giving him oral.

1. Use Your Teeth (Even Slightly)

I realize that the idea of grazing his penis a bit with your teeth might seem like a fantastic idea, because of teasing and all, but the majority of my male friends said they were terrified by this move. Teeth and penises are not meant to hang out together ever, unless of course you’ve mutually agreed that this is what he’s into, because of some sort of thrill. If there’s no agreement there, then it's a good idea to keep those teeth covered up by your lips.

3. Pretend You Don’t Have Hands

To quote Sex and the City’s Samantha Jones, you know, because I haven’t used this quote a hundred times before or anything, “Honey, they don’t call it a job for nothing.” So, in that regard it is a job because it isn’t easy per se, but you don’t want to act like it’s a job. Plus, you want to enjoy yourself, too! A job is something you don’t want to do, but have to do, because, well, life. Don't make it that.

Men are extremely visual creatures. I’ve yet to go down on a guy who doesn’t have his head propped up watching every move I make. With that in mind, you want to make eye contact. While’s there nothing wrong with looking down and focusing on what you’re doing, he wants you to look up and he wants to look into your eyes while you have his penis in your mouth. It’s all about the visual, as well as physical stimulation.

If you’ve ever faked an orgasm (although you really shouldn’t because you’re denying yourself when you do), then you already know that your real moans and your fake moans do not sound anything alike. Although research has found that moaning enhances sexual experiences, if you're fake moaning and faking interest in the whole thing, he’s going to pick up on it and that lack of enthusiasm is going to be contagious. Don’t fake it.

Similar to giving a hand job, you really want to use lube while giving oral. Of course, since you’re using your mouth anyway, spit makes for a great substitute, but if you’re on the dehydrated side (too much alcohol, perhaps?), you might not have as much saliva as you’d like for a proper blow job. In that case, reach for flavored lube. I once used an amazing chocolate body paint from Babeland that tasted like chocolate ganache and ended up giving the greatest blow job of my life. I just wish I could remember the name of it. Either way, lube is your friend.

8. Do The Same Thing Over And Over

While consistency, especially if your consistency is great, isn’t bad, your partner probably wants you to switch things up a bit. From licking to sucking to playing with his balls to a little deep throat action―don’t be scared of variation in how you approach giving oral. It's more fun for both of you that way.

Want more of Bustle's Sex and Relationships coverage? Check out our video on sex positions on small penises: