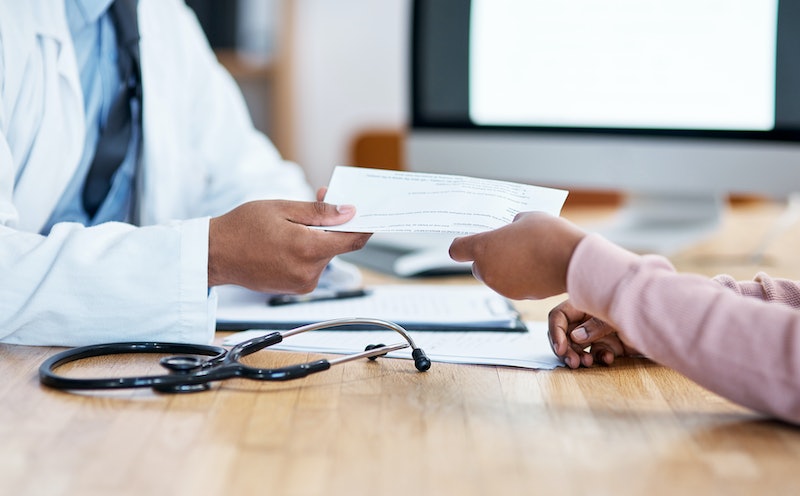 The DUP has proposed a new bill to prevent late-stage abortions in the case of non-fatal disabilities in Northern Ireland. The private members bill – brought forward by Democratic Unionist Assembly (DUP) member Paul Givan and backed by disability charity Don’t Screen Us Out – wants to see the law surrounding non-fatal fetal abnormalities changed, claiming it is discriminatory, and will allow abortions for fetuses with Down’s syndrome or cleft palates. Here's what you need to know about the new proposal and how it could affect abortion laws in Northern Ireland.

As the BBC states, Given believes this bill is about removing disability discrimination and not about amending the law in cases of fatal fetal abnormality. "This is an opportunity for people to come together and fight a prejudicial, discriminatory piece of legislation," Given is reported to have told Good Morning Ulster.

"We have introduced laws called the Disability Act of 1995 and we have built upon that to place duties on public authorities and support people with disabilities. I believe that those rights – and these are human rights – ought to be conferred upon people before they are born and that is what this campaign is going to be about," he continued. "I believe there is a majority of assembly members that agree with this, as does the majority of the public."

Last year, abortion laws in Northern Ireland saw a huge change. Back in October 2019, Stormont voted to decriminalise abortion and began working to clarify the details and put a framework in place for the regulations. On March 25, 2020, it was announced that Northern Ireland would now offer unrestricted abortion up to 12 weeks.

Under this 2020 ruling, terminations within the first 12 weeks of pregnancy are granted "without conditionality", and terminations are permitted up to 24 weeks when there is a risk to the pregnant person's physical or mental health. In instances of fetal abnormality and where there is a risk to pregnant person's life or risk of grave permanent injury, there is no gestational time limit. Prior to this ruling, terminating a pregnancy was only allowed in Northern Ireland in very specific circumstances.

When these new abortion laws came into place in Northern Ireland, the government took into consideration the The CEDAW Report, which recommended legalising abortions in the case of "severe fetal impairment, including fatal fetal abnormality, without perpetuating stereotypes towards persons with disabilities and ensuring appropriate and ongoing support, social and financial, for women who decide to carry such pregnancies to term."

In England, Wales and Scotland, under the Abortion Act 1967, terminations for both severe fetal impairment (SFI) and fatal fetal abnormality (FFA) are lawful grounds for an abortion without a time limit.

The latest bill proposed by the DUP is due to be put forward on Feb. 16, and if a majority of Members of the Legislative Assembly (MLAs) are in support, it will then be handed to an Assembly Committee for consideration.

More like this
Here’s Where The NHS Nurses’ Strike Currently Stands
By Sophie McEvoy
Gen Z Are Twice As Likely To Identify As Queer, According To New Data
By Sam Ramsden
How To Help Those Affected By The Turkey-Syria Earthquake
By El Hunt
11 Exercises For Dowager's Hump That'll Help Your Neck Posture
By Carolyn Steber
Get The Very Best Of Bustle/UK
Sign up for Bustle UK's twice-weekly newsletter, featuring the latest must-watch TV, moving personal stories, and expert advice on the hottest viral buys.