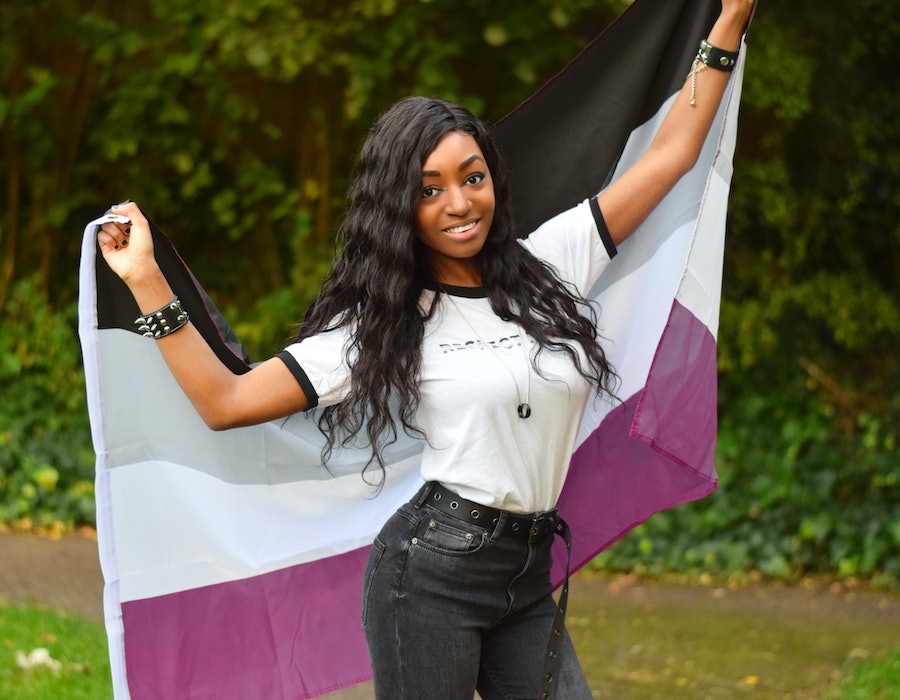 Yasmin Benoit is asexual and aromantic — aka aroace, or someone who doesn’t experience sexual or romantic attraction. She’s a model and an activist, serving on the board of the Asexual Visibility and Education Network, based in Reading, England. For some, her two gigs seemingly butt up incongruously against each other, especially given that she’s done some lingerie modeling, a career path that some folks find surprising for an ace (the term for those who fall under the asexual umbrella) person.

As for how she got here, Benoit describes identifying a dearth of diverse models among the retailers she like to shop from. “I saw online, the kind of brands whose clothes I bought, they would have models on their websites, and none of them really looked like me,” says Benoit, who describes herself as having a gothic sensibility and repeatedly insists to Bustle that she’s “weird-looking.”

“I was never one of those kids that made people go, ‘Oh my god, she’s so pretty.’ People would tell my friends they’re so pretty, and then just be like” — here, she sighs dramatically — ‘You’ve got nice boobs, I guess?’”

In the past few years, Benoit has brought an international, non-cartoon face to asexuality, which tends to suffer from a lack of adequate media and pop culture representation. (No offense to Todd Chavez, the ace BoJack Horseman character.) Now it’s Ace Week, an annual international campaign designed to go beyond just raising awareness for the orientation. Benoit, 25, spoke to Bustle about busting stereotypes, the whiteness of the ace community, and the #ThisIsWhatAsexualLooksLike campaign she started.

When did you first realize you were asexual and aromantic?

Those experiences blended into the same thing. I didn’t really differentiate them until I realized there are lots of asexual people that aren’t aromantic. I realized I was asexual when everyone else seemed to realize that they weren’t. That’s something I noticed when I was around 10, but I didn’t learn that there was a word for it until I was 15. Even though I discovered the word aromantic probably around that time, it didn’t seem that relevant to me. I had no reason to think I needed to specify it, because I assumed most asexual people would be aromantic.

Was it a difficult realization for you?

No, it wasn’t. I’ve always said being asexual was never the weirdest thing about me. I think in comparison, all the other things you encounter navigating society, having something different about you that people can’t see was not a big concern. I was already navigating our world as an unusual-looking Black girl in a predominantly white school at the time.

Does being asexual almost necessitate being an activist?

It depends on your definition of activism, but I feel like for me, there was definitely a difference between just living as an asexual person and being an activist, because prior to the activism, asexuality did not come up much. I became very skilled at adopting a “don’t ask, don’t tell” policy. There would be people I’d been friends with for five years who did not know I was asexual.

I guess to a degree if you’re open about it, you’re gonna have to do some educating. You should be able to just sit on your butt and not do anything if you don’t want to.

Do people imagine a disconnect between something like lingerie modeling, which can be very sexual — or at least sensual — and being asexual?

I think people equate sexual attractiveness with sexual availability, in a sense, and I think that’s the part that causes the conflict, because they think that if you’re seen as being sexually attractive, then you should be sexually available. So then it’s like, well, you’re a walking c*ck tease. That upsets people.

When people think of asexuality, they don’t often envision someone like you, as a Black woman. Why do you think that is?

One, Black women historically and in contemporary culture are quite hypersexualized, and it means that people definitely have a hard time computing Black women with being asexual, because we’re portrayed in a way that suggests continuous sexual availability and hypersexuality. Black girls don’t really get to be girls for as long. They’re considered more adult and available from a much younger age.

Then I also think it’s an issue in the representation that asexuality tends to get. There’s usually a preference for representing asexual people as being white, even if it’s not explicit. When it comes to someone that exhibits quote-unquote asexual characteristics, it tends to be depicted as a nerdy white person most of the time. They have a Sheldon Cooper-esque image in their head when they think of asexuality. Because of those factors, you’re less likely to have Black people that are open about being asexual.

As a Black woman and someone who models lingerie, is there backlash within the ace community for your perceived hypersexuality?

There’s definitely been people that probably don’t think I’m very relatable or are uncomfortable with someone like me being in the position that I’m in. The loudest people in the community tend to be white, and then when you’re the Black symbol of the diversity of the ace community, people love to say, “Hey, look! We’re not just a bunch of white kids. We have a Black person right here.”

But then when I say, “Yeah, and you guys have a racism issue, too,” then it’s like, “Oh, you went there.” I always say being a minority in any sense does not necessarily make you immune to discriminating against someone else. It doesn’t matter how liberal your circle is. Doesn’t matter how good your intentions are. Everyone is capable of it to some degree, and the asexual community is not immune to it, either.

Is modeling a way for you to break through the perceived whiteness of the ace community?

I think it’s become that. It wasn’t my motivation in the beginning. My motivation for modeling was very much just about providing more diversity in a scene that I had already been a part of for most of my life.

Does representing so much to so many people ever get exhausting for you?

It does. Being seen as a living symbol of something [is] a weird, dehumanizing thing. On one hand, it’s lovely when people see you like that, and they’re very encouraging and there’s a lot of love, but at the same time, it’s weird because people know me. I don’t know them. People talk at me a lot.

Then it makes social situations weird when you go somewhere, and you’re like, “Oh, I don’t know who any of these people are,” but everyone’s like, “Well, I already know all about you, and I’ve already formed an opinion about you.” That adds an extra weird social weight to even simple things that you do.

Now that people are increasingly aware of asexuality and aromanticism, what are your goals that extend beyond just awareness?

I feel like those are the two focuses: one, awareness, and two, representation, but that is not the end: Normalization is the goal. I think in an ideal world, it would be cool if people are like, “Oh, so you’re gay, you’re straight, you’re bi, you’re asexual,” and it’s just one of those things that’s just part of the conversation. It’s not something where you need to do a TED Talk about it all the time.

What does #ThisIsWhatAsexualLooksLike mean to you?

I’d always been told, “Oh, you don’t look asexual. You don’t seem asexual, because you dress like this, and you look like this.” You might hear from asexual people online, but it’s a lot harder to see us. I started it as a way to help the community not to rely on the media to represent us and give us an easy way to represent ourselves and give the agency back, because you could just type it in and actually see real asexual people — not just an avatar or a little cartoon character.

What ended up surprising you about that campaign?

More like this
35 Sexy Texts To Send Your Partner
By Griffin Wynne and Carolyn Steber
What Are Swingers? Everything You Need To Know
By Lexi Inks
8 Flirty Games To Play Over Text With Your Crush
By Lexi Inks
Jess & Anya Are The High School Sweethearts Who Gave Love A Second Chance
By Jessica Morgan
Get Even More From Bustle — Sign Up For The Newsletter