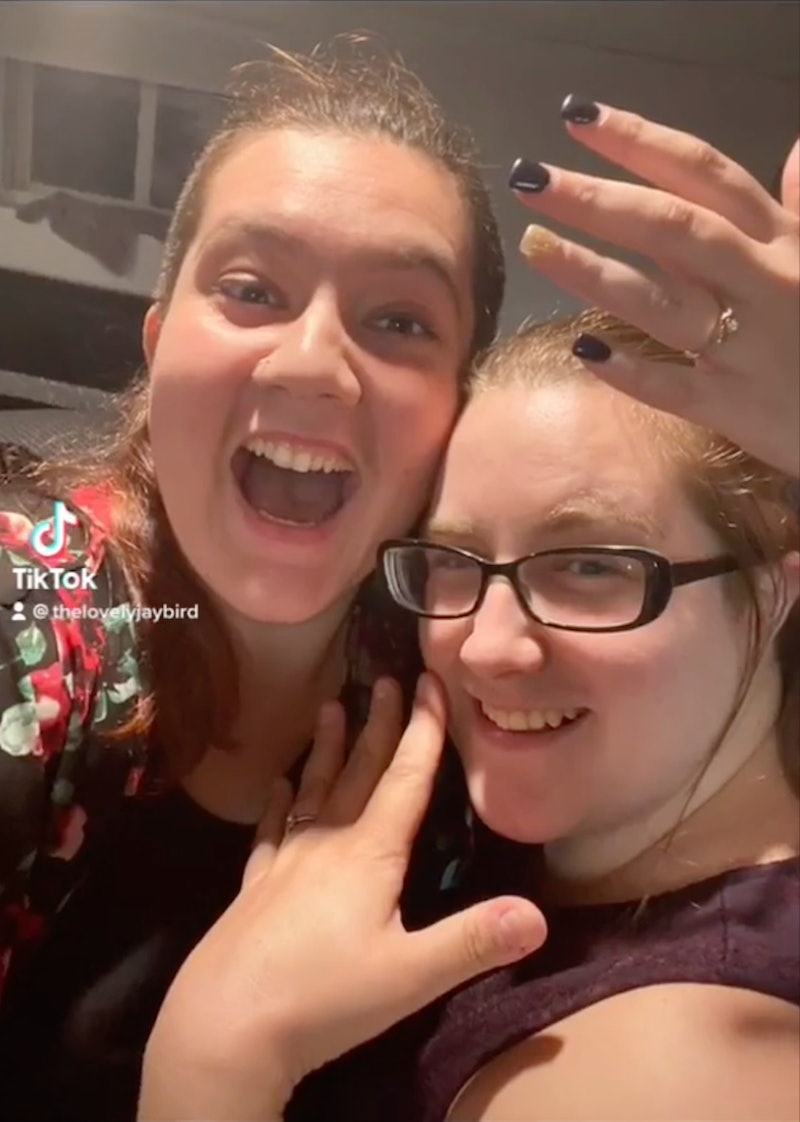 Ever come home from another Tinder date gone wrong, and immediately start joking about marrying your best friend? “Life would be so much easier,” you text them exasperatedly, “if we could just move in together, adopt a dog, and live happily ever after.”

It feels so good to imagine spending your life with that one person who has your back 100%. But the concept of platonically marrying your best friend doesn’t have to be a daydream. Take Jay Guercio, for example, whose recent TikTok about platonic love went viral with almost 900,000 likes.

Guercio stitched her video with one asking for “misconceptions about your spouse.” In it, she talks about how she platonically married her best friend so they could spend their lives together and raise foster kids. They make decisions and operate just like any other married couple, but aren’t romantically involved at all.

She and her wife have complete freedom to seek romantic or physical relationships outside the marriage, but Guercio says she’s quite happy and doesn’t need or want that right now. “The love that we have, the trust, the laughter, the shenanigans — it’s everything I could ever ask for,” she says in her video. “I’m happy and proud of our marriage.”

The video stirred up a conversation about aromantic relationships and platonic love, including what it’s like and how it works. To put it in simple terms, “an aromatic marriage is friendship with commitment,” Jodi Erin Williams, MA, LPC, CST, a licensed professional counselor and certified sex therapist, tells Bustle.

Like Guercio’s relationship, “it can have all of the features of a romantic committed relationship, such as sharing responsibilities, emotional support, and camaraderie,” Williams says, “but it lacks the romantic feelings that people normally associate with marriage.”

It isn’t traditional, but that’s kind of the point. “People are beginning to be more open to relationship dynamics that they design to meet their needs,” Williams says, “instead of sticking to the status quo just because that is what is expected of them.”

Why Does An Aromantic Marriage Work?

While any relationship can have its ups and downs, one of the draws of an aromantic marriage is the ease of it all. “A lot of marriages have trouble because it can be work to keep romance alive,” Williams says. Arguments often stem from unmet expectations, cheating, jealousy, loss of interest, and so on. But when partners are platonic, that’s less likely to happen.

In another video, Guercio talks about how she and her wife, Krystle, resolved a mini argument by validating each other’s feelings and working on creating a plan so the problem didn’t happen again. This type of clear resolution can obviously happen in any healthy relationship, she said, “but to be honest it works best for us because we’re best friends.”

“A majority of people are still opting for that traditional idea of marriage where they marry the love of their life, someone they are also attracted to,” dating expert Maria Sullivan tells Bustle. But it certainly isn’t the only way to create a life with a partner. “Marrying your best friend is a safe option for some,” Sullivan says, particularly if you’re more than ready to settle down, find financial security, or have kids.

Can You See Other People?

Every platonic relationship is different when it comes to what is and isn’t OK. Couples come up with their own shared values and agree on how things will work, including whether or not they’re open to seeing other people.

In Guercio’s video, this is what had many commenters confused. One TikTok user said, “Not saying [your wife] doesn’t appreciate you the same way, but what happens if she finds a man or woman that she wants to marry down the line?”

It’s a valid question, especially for couples who are open to dating and hooking up with other people. But both Guercio and Williams point out that’s a possibility in any relationship, regardless of family structure. Even the most traditional of married couples can fall out of love with each other, or in love with someone else, which is why constant communication is so important.

If a partner ends falling for someone else, it would be up to the couple to talk and decide what to do with their relationship, as well as their family. “This could end in a divorce just like a normal relationship,” Sullivan says. “Or maybe there are compromises you make to stay happy and together in a platonic way.”

More like this
Are Quality Time & Gift-Receiving Love Languages Compatible?
By Lexi Inks
10 Creative Sexting Ideas That Don't Involve Nudes
By Lexi Inks
The 19 Best Tweets & Memes About Bisexual Awareness Week
By Lexi Inks
How To Set Rules If You're In An Open Relationship
By Lexi Inks
Get Even More From Bustle — Sign Up For The Newsletter