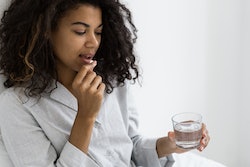 If you throw back a handful of vitamins and minerals every morning, it might be time to look into enzymes as a way to fully round out your routine. Specifically, CoQ10 and all of its many benefits.

The antioxidant CoQ10 is short for “coenzyme Q10” and is also known as ubiquinone, says Dr. Carrie Lam, MD, FAAMFM, ABAARM, the medical director and co-founder of integrative medicine facility Lam Clinic. Cells use this substance to produce essential energy, which is needed for cells to grow and maintain themselves,” Dr. Lam tells Bustle. “In fact, CoQ10 is so vital to the production of energy that it has the highest concentration in the organs that require the most energy — such as the heart, liver, and kidneys.”

You can get a dose of CoQ10 from foods like organ meats like liver, wild-caught fish, olive oil, peanuts, and broccoli, says DJ Mazzoni, MS, RD, CDN, CSCS, a registered dietician and medical reviewer for Illuminate Health, a health product review site. But the amount of CoQ10 found in food often isn’t enough to meet your recommended daily allowance (RDA).

Another thing? “Although your body can make some CoQ10, production declines with age,” adds registered dietician Anna Bohnengel, MS, RD, LD. “Chronic inflammation, poor liver function, and certain medications, like statins, can also deplete CoQ10.” For more info on the benefits of CoQ10, and why you might want to add it to your supplement routine, read on below.

The Benefits Of CoQ10 Supplements

“More than 4,000 different clinical studies have been conducted about CoQ10 side effects, and all of them have proved that higher levels of CoQ10 indicate that a person will lead a life that is healthier and longer,” Dr. Lam says.

And this is especially true as it pertains to heart health. “For example, three out of every four individuals who suffer from heart conditions have been found to have major deficiencies of CoQ10,” Dr. Lam explains. “When those with heart problems were given CoQ10, their conditions were found to improve.”

CoQ10 has also been shown to lower high cholesterol, Dr. Lam says. “This is because high cholesterol is known to lower the levels of CoQ10 produced in the body, causing a deficiency,” she adds. “Studies also support that high blood pressure could benefit or improve from an increase in CoQ10.”

A 2019 meta-analysis published in Acta Neurologica Scandinavica noted that CoQ10 could help prevent migraines, which just so happen to be one of the most frequent neurological disorders in the world. According to the review, CoQ10 was found to shorten migraine duration, and it was more effective than a placebo in reducing the number of migraine days per month.

“In patients with deficient levels of CoQ10, supplementing with the compound can improve energy levels because it increases ATP production,” Mazzoni says. That’s why athletes care about CoQ10. Studies have shown that CoQ10 supplementation of about 60 to 100 mg a day for four to eight weeks improves aerobic power, anaerobic threshold, exercise performance, and/or recovery after exercise. While more studies are needed to really dig into how helpful CoQ10 is when it comes to boosting energy, it’s a supplement you may want to add to your routine, especially if you’re a fan of working out.

While you may have spotted CoQ10 as a topical ingredient in skincare products, dietary supplementation of CoQ10 might also have an impact on skin texture. During a 2016 study published in BioFactors, researchers investigated the effects of 12 weeks of daily supplementation with 50 and 150 mg of CoQ10 on skin parameters and conditions. The results? Significantly reduced wrinkles and micro-relief lines, and improved skin smoothness.

5. It Boosts The Immune System

CoQ10 is also important for the immune system, Dr. Lam says. According to a 2021 review published in Antioxidants (Basel), the enzyme plays a number of important roles in the cell that are required for the optimal functioning of the immune system.

The study notes that the immune response has intensive energy requirements, which is why “an adequate supply of CoQ10 is therefore required to enable the various cell types of the immune system to function optimally.”

CoQ10 also protects your health by playing an anti-inflammatory role. As Dr. Lam says, “CoQ10 works the same way an antioxidant does by defending the body from damage caused by certain molecules known as free radicals.” Your doctor may recommend it to ward off diseases, especially those that are age-related.

How To Find A CoQ10 Supplement

There are two forms of CoQ10: ubiquinol and ubiquinone. Mazzoni recommends ubiquinol, as the same dosage leads to higher blood levels than ubiquinone.

If you find yourself puzzling over different bottles in the supplement aisle, go with one from a company that does third-party testing so that you’ll know your pill actually contains the stated levels of the compound, Mazzoni says.

If you follow a vegan or vegetarian diet, it might be helpful to add a CoQ10 supplement since you definitely aren’t digging into organ meats or wild-caught fish. Mazzoni also recommends asking your doctor to order a blood test to check CoQ10 levels, especially if you’ve been feeling tired. If you’re in your 30s or 40s, your levels might already be starting to drop, he adds. “A 40-year-old who is healthy will still have significantly lower CoQ10 levels than they would have had at 20.”

Most of the medical research on CoQ10 establishes its effective dosing range at 100 milligrams (mg) to 200 mg per day, Mazzoni says. “Once you start, it may take up to eight weeks before any changes occur,” Dr. Lam adds. CoQ10 also isn’t easily absorbed by the body, so check with your doctor to make sure your dose is correct.

The Side Effects Of CoQ10

While CoQ10 has very few side effects, Mazzoni says some folks might experience upper abdominal pain or loss of appetite when taking it, though it’s rare. “This supplement can also interact with anticoagulant medication,” he adds. So, as it goes with any supplement, it’s always a good idea to check in with your doctor before adding it to your routine.