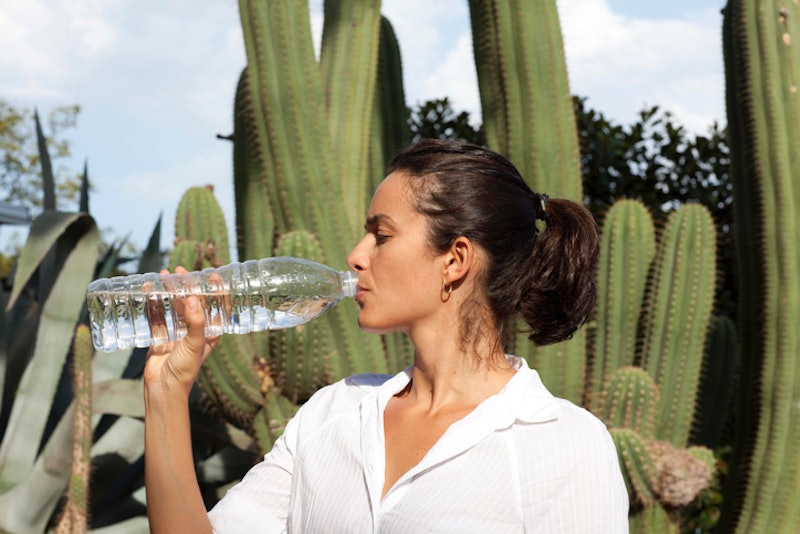 You’re looking for an “in” drink to bring to your cousin’s backyard BBQ and you’re not sure what to choose. When your roommate suggests spiked cactus water, you might cock an eyebrow. But it turns out that cactus water can either get you drunk or help with a hangover — so maybe you’ll bring both the cocktail and mocktail versions.

Vanessa Hudgens partnered with actor Oliver Trevena to launch a cactus water brand Caliwater earlier this year, which helped launch the prickly pear into mainstream view. According to a Sept. 2020 analysis released by Grand View Research, cactus water across the globe was valued at around 16.72 million dollars in 2019 — and the market for the naturally sweet mode of hydration is expected to grow by 20.4% annually through 2027. So if you can’t grab some at your local bodega yet, you’ll probably be able to soon.

But what is cactus water? Simply put, it’s pretty much what you’d expect it to be: water from a cactus. “Because cactus water contains vital nutrients like vitamin C, calcium, potassium, and magnesium, it can help those that drink it stay hydrated while also helping to meet their nutritional needs for the day,” says registered dietician Mia Syn, M.S., R.D. Read on for more intel on the buzzy functional beverage.

The drink comes from the bellies of prickly pear cacti, which are edible and — yes, it makes a difference — pink. That pink tint comes from betalain pigments (which you also get from beets). Betalains don’t just make cactus water pretty, though. These pigments in cactus water have anti-inflammatory properties, which can be helpful when you’ve got any swelling you want to reduce — think, reducing your soreness after a hard workout.

Prickly pear cacti also contain a high level of antioxidants. “Antioxidants play a huge role in our body,” says Scotty Schellner, a double-certified nutritionist and the lead nutritionist for Eat Clean Phx. “Oxidative stress in our body’s is one of the leading causes of inflammation and plays a major role in the breakdown of our bodies. By adding high antioxidants foods and beverages, we help to fight off these stressors. They are not an overnight ‘magic pill,’ but they work in a compounding effect over time.”

According to a 2012 study published in the Journal of Medicinal Food, prickly pear cacti can help prevent stress-induced ulcers in rats. So it stands to reason that cactus water may be an accompaniment to your stress-fighting meditation routine. A study published in the same year in the Journal of Ethnopharmacology also examined the health impact of prickly pear cacti on rats and found that it can help reduce blood sugar levels.

Hungover? You might want to grab a can of cactus water. A 2013 study published in the journal Experimental and Toxicologic Pathology suggested that prickly pear cacti can help reduce the oxidative stress in the body caused by alcohol consumption in rats. In other words, it helped drunk rats feel better after their ethanol-related experiences.

Plus, if hydration tends to be a chore for you, drinking something with its own flavor might convince you to actually get closer to your eight glasses a day.

Too much of a good thing isn’t always great — especially if your body is prone to not like the thing to begin with. According to the Lung Health Institute, side effects of drinking cactus water can include headaches and gastrointestinal distress (think: nausea, diarrhea, vomiting, and stomach pain).

“Your body might not be able to process the influx of naturally occurring minerals and electrolytes in high doses yet,” Schellner tells Bustle. Syn points out that you might notice a laxative effect from cactus water. So start drinking the good stuff slowly — try mixing two ounces of cactus water with four ounces of regular water and gradually adding more over time.

It’s also possible for it to cause hypoglycemia, which is when your blood sugar dips too low. And, like grapefruit juice, cactus water may also interfere with certain medications — specifically kidney, liver, and pancreatic medications, according to the Lung Health Institute.

As with anything you’re buying at the store, you’ll probably want to check the label to see what other ingredients cactus water contains. If your goal is to help regulate your blood sugar with cactus water, for example, it’ll help to make sure that there isn’t added sugar in the drink.

Cactus water and coconut water are both touted in the fitness industry as natural sports drinks. They both come right from the source and have a natural tang to their flavor. But there are some differences, too. If neither drink has any added sweeteners, cactus water contains less sugar than coconut water (think: how veggies often have fewer sugars than fruits). You might also find that you like one drink over the other in terms of how they taste (or that Vanessa Hudgens’ endorsement of cactus water puts the prickly pear over the top for you).

Where To Buy Cactus Water

Looking to grab yourself some prickly pear without the prickles? These brands all sell cactus water with different flavor profiles and levels of alcohol (ranging from none to a lot).

Get your hydration on and fight that inflammation at the same time.