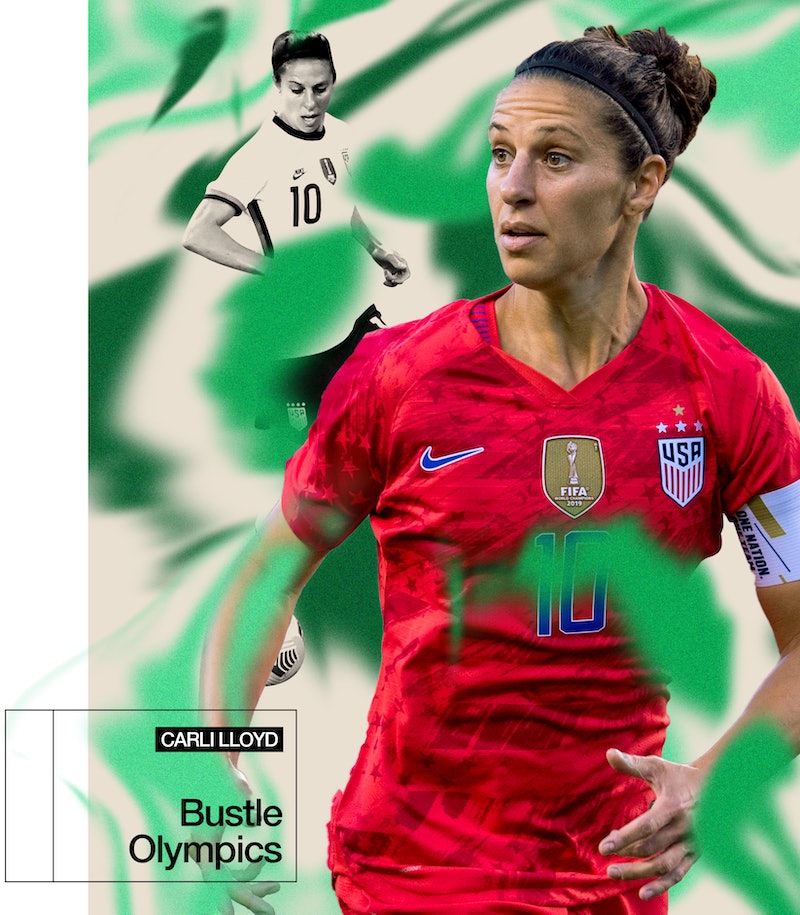 Scroll through U.S. Women’s National Team forward Carli Lloyd’s Instagram, and you’ll find a lot of quotes. Fittingly for a player who’s off to the 2021 Olympics at the end of the month, she tells me that her favorite is Theodore Roosevelt’s “The Man in the Arena,” which speaks to the idea that the only person who matters in a contest is the one doing the damn thing — not the spectator, the critic, or even the coach. This resonates a lot with Lloyd, 38, who’s been in the spotlight since she first joined the national league in 2005.

“In my career I’ve had a lot of critics, haters, whatnot,” Lloyd says, referencing past Twitter drama and the fight for equal pay for the U.S. Women’s National Team. “And at the end of the day, it’s about the person who's actually in the arena doing the job.”

When she travels to her fourth Olympic Games in Tokyo this summer, she’ll join her World Cup teammates like Megan Rapinoe, Tobin Heath, and Alex Morgan to compete for the gold medal. She’ll be 39 years old, making her the oldest player the U.S. Women’s National Team has ever sent to the Olympics. But she’ll also be one of only three players of any gender to play in 300 or more international matches. For Lloyd, standing out in a crowded field is part of embodying that Roosevelt quote. It's also why she's partnered with Secret ahead of the 2021 Games. "Secret has been a long-standing supporter of women's sports," Lloyd says. "I live an authentic life on and off the field, so aligning myself with brands and partners that make sense to me ... is really what I'm all about."

Here, Lloyd describes how she’s preparing for the games, how she takes care of herself when she has time off, and the post-Olympics meal she can’t wait to get her hands on.

The Olympics are just weeks away. What does your training schedule look like right now?

It's pretty intense. Every day I’ll train usually about two hours doing ball work, my strength session is usually an hour or so, and then I do extra running on my own, which can be anywhere from 45 minutes to an hour. My training doesn't taper off when I’m at home; it's a weekly routine that I try to stay in. I also listen to my body and make sure that I'm not overdoing it, but I'm also not underdoing it.

How do you push through on days that feel extra hard?

There are obviously days where I don't feel great and I will wake up feeling tired or have a lot of things on my mind. The biggest thing is getting out there — you only feel better afterward. I do this for a living, but with other people, the hardest part is actually going outside and then starting your run. It triggers my brain to feel so much better when the endorphins start flowing.

Speaking of feeling better, what are some of your go-to methods of self-care?

Massages — it's a recovery thing for me, but it's also something where I can kind of shut off and relax. Being at home on the couch or relaxing by the pool, or something where I'm not running around, is another.

What common piece of fitness advice do you think is just total BS?

Everybody is looking for a quick cardio workout that's going to make you lose 20 pounds in a week or something. Anything that you do in life, you have to consistently live out that lifestyle. That’s what it takes to live healthily and feel good.

What about keeping your hydration consistent?

People underestimate how good water is for you. I know that I don't sleep well when I'm dehydrated. I think the majority of people are probably very dehydrated and they don't even realize it. I think those bottles that say the amount to drink on them are really good because they give people a goal. For me, it's not the day before a game where I'm guzzling water; it's the week leading up to it.

So you’ll have lots of water before the games, but what’s going to be your post-Olympics meal?

Definitely a cheesesteak of some sort and fries.