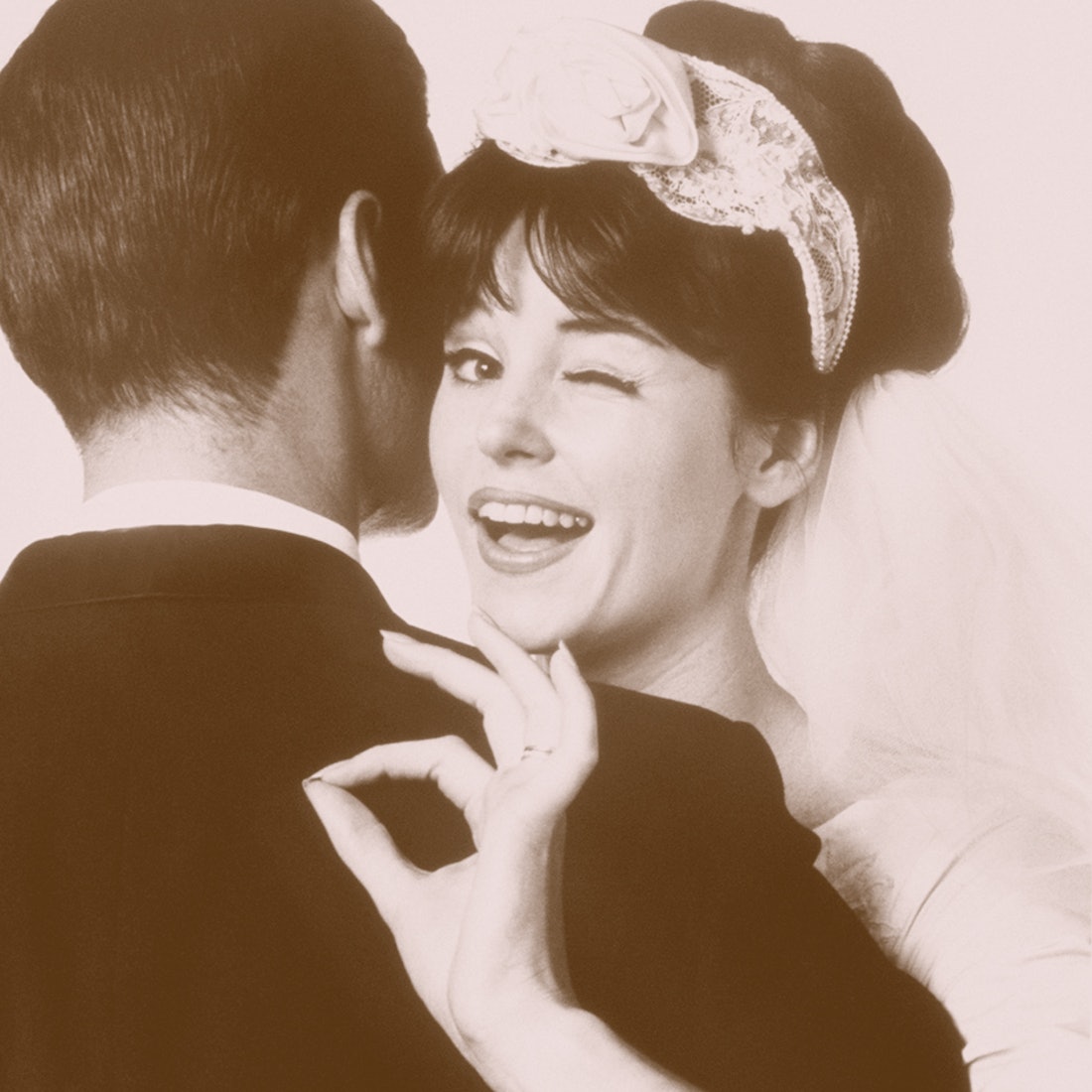 Archive Holdings Inc./Getty Images
By Kaitlin Menza
Dec. 16, 2021
How To Get Married

Once upon a time, there was a man sending mixed signals. On dates, he was effusive, engaged, and seemingly excited about the woman he’d just met. But when he was apart from her, he texted sparingly and most often at 1 a.m., and would only make plans on Sundays. Was he looking for a relationship with her or just the occasional hang?

We tell ourselves that when two people fall in love, they find themselves simultaneously fulfilled on every possible level and exactly aligned on their life chronology, and spend the rest of their days planning “love doing life with you” Instagrams for each anniversary. But the fact is, combining two full lives takes constant negotiations, from “do you want to be monogamous?” to “who should wash the dishes tonight?” to “what’s the right way to raise our children?”

The woman in the fairy tale above was me. After about a month of dating the guy who’d text at 1 a.m., I finally just asked if he was truly interested in a relationship with me, because I was truly interested in one with him. It turns out he was — and that the post-midnight chats and Sunday-only dates were a result of his career in the restaurant industry. Duh! Right then and there, we hammered out a deal to make his ridiculous schedule work with mine, and soon we didn’t need the fine print, because we were spending every night together. It doesn’t sound like a sexy conversation, but it was: vulnerable and real, even if the parameters were business-like.

Nearly four years after that summit, we’re in constant negotiations again — with florists, photographers, and venues as we finalize our wedding plans. Inspired (and nostalgic), I asked six people who negotiate deals all day (or give advice to those who negotiate deals all day) for their advice in locking down a commitment from a romantic partner. Maybe it shouldn’t be this hard. But perhaps forming the most important relationship of your life shouldn’t be too easy, either.

Set Expectations From The Beginning

According to Sarah Kunst, who evaluates companies and secures investors as managing director of venture capital firm Cleo Capital, it’s never too soon to assess how a potential partner handles everyday decisions and arrangements.

“In general, people are open to negotiation, if they're reasonable people who are interested in you. If someone's not open to negotiation, even on something small — like where to have dinner or what movie to watch — they don't value you,” says Kunst. “It's not always personal, but who wants to spend time with someone who doesn't value them?”

She also thinks that your big-picture plans should be stated early on. “Be clear about where your “bright lines” are. If you absolutely aren't open to dating someone who isn't looking for an exclusive, long-term relationship, say that in the first couple dates, and then if they say they're not looking for what you want, leave,” she says. “If you're dating someone who is open to the same things you are but maybe is on a slightly different time scale, talk about what you need to feel secure and reassured and what doesn't work for you. Communication and healthy boundaries solve 90% of relationship problems between compatible people.”

The Big Conversation Doesn’t Have To Be A Big Fight

“‘Negotiation’ can have an adversarial connotation, when it’s simply a conversation to figure out what both parties want and how to get it,” says Danielle Lazier, a real estate adviser who’s sold $950 million in real estate in the notoriously crushing Bay Area market.

Yes, you might feel tense given the uncomfortable topic, but try not to go into hard conversations with hackles raised. Plus, you happen to love the person on the other side of the bargaining table, and chances are you want them to be happy. So don’t come in hot — or sickly sweet.

Lazier says that 90% of her job is landing the perfect tone of voice with buyers: calm, polite, friendly. “People see right through you if you're overly aggressive or insincere,” she says. “When people like you” — or in this case, remember why they like you — “they’re more likely to give you what you want.”

Delay Is Also A Form Of Communication

A direct discussion of feelings and fears and the future is absolutely intense, yes, especially in the earlier days of a relationship when it’s all kissing and plotting fun dates. But if the potential person seems skittish or uncomfortable about “where this is going,” or avoids eye contact and crosses their arms when the topic comes up, that may be a sign in itself.

“What are the more subtle signals that they give? They might delay the discussion or change the subject, or say that they're not sure at the moment. Those would be obvious ways that people would back away,” says Joel P. Trachtman, a professor of international law at Tufts University who wrote the book The Tools of Argument: How the Best Lawyers Think, Argue, and Win.

Some hesitation at the beginning is normal, he notes, as they figure out if they like you and trust you. “If you just met a week ago and you say, ‘I'd like a commitment,’ and they say, ‘I'm not sure yet,” that's probably an honest answer and a responsible answer,” he says. But if it’s been three years and they’re still not sure, that’s a bit less reasonable — and a clearer sign they’re not willing to change status and move forward.

Just Lay It All Out

“I have this saying: Get the elephants in the room out early,” says Lazier. It’s her way of addressing the big and obvious challenges of a situation right at the beginning, and she says there have been a ton of examples within the day-to-day of her real estate business (say, admitting a home’s kitchen needs a major upgrade when showing it to a buyer) as well as her personal life.

“When I was in my mid-30s, single, dating, and knowing very clearly that I wanted to start a family, all of my friends told me to keep very quiet about that. That I should absolutely not be telling anyone this in the beginning, because it would scare them off,” she says. “And my standpoint on it was, why do I want to waste my time with someone who doesn't want a family? And just because we both want a family doesn't mean we'd want it together. But why bother if you're totally not on the same page?”

It’s not just marriage and kids, either; you might need to share that you ultimately would like to move back to your home state or that you’re planning to go to grad school in the next few years. “Don't hide things that are essential to who you are as a person,” Lazier says.

State Your Case, Then Stop Talking

Once the desire is spoken — “I like you. Do you like me?” hasn’t needed improvement since middle school — the next challenge is to zip it and see how the other person responds.

“One thing that I use a lot is silence. Silence is brutal,” says Susan Canavan, a literary agent at the powerful Waxman Literary Agency, who admits that she (and many people) will babble just to fill the silence.

“It takes a lot of discipline, if you’re normally a person who chats people up, but just reacting to something in silence for a minute? It can really disarm a situation,” she says. Let the other person break the quiet, and just see what bubbles up.

The Conversation Might Happen Over The Course Of Hours, Or Even Days

What bubbles up may be a request for time to process your feelings, which is a perfectly acceptable response and not necessarily an indication that the person is booking it for the door. “Be less reactionary, and allow all parties to process communication and actions in the timeframe that they feel comfortable with,” says McKenzie Ryan, a real estate agent in New York City and the founder of the asset advisory team at Compass (meaning she’s sought out even tougher big-picture conversations about the future).

“Oftentimes, our initial response does not reflect what we mentally or emotionally feel inside, and instead, is a response from a point of pain or insecurity. By providing some space and time to rationalize through thoughts and feelings, you can delineate what is an intuition and what is an insecurity — which then allows you to communicate clearly and productively with the other party.”

Leave An Ultimatum As The Last Resort

“The general recommendation is that we don’t make a threat that we’re not planning to carry out,” says Trachtman. “The better thing is to be open and discuss your desire, to say, ‘I’m 29 years old and by the time I’m 32, I want to start a family,’ or whatever the underlying motivation is. Then ask, ‘How do you see things?’” If you’re going to make an ultimatum — for example, “I need to be engaged by the holidays or I’ll have to move on,” then you have to be ready to do so, otherwise “the other side understandably doesn’t take you as seriously and can’t trust your word,” says Kunst. “Or better yet — avoid dating people who’d need an ultimatum to want to spend their life with you!”

Figure Out If This Person Has Respect For You

Anyone who’s watched Succession knows that the business of mergers and acquisitions, who owns a company and who wants to own it, can be hostile. But in the best scenarios, each side approaches the table with mutual respect and interest, says Jennifer J. Fondrevay, founder of the M&A consultancy Day1 Ready™ and author of Now What? A Survivor's Guide for Thriving Through Mergers & Acquisitions.

“If you don't have respect for the other side, then the likelihood of you succeeding is significantly diminished,” she says. Ponder the best, strongest couples you’ve ever known, she advises. “More often than not — sure, they show love for each other, but more importantly, they show respect. They bring out the best in each other. And those are the partnerships you admire.”