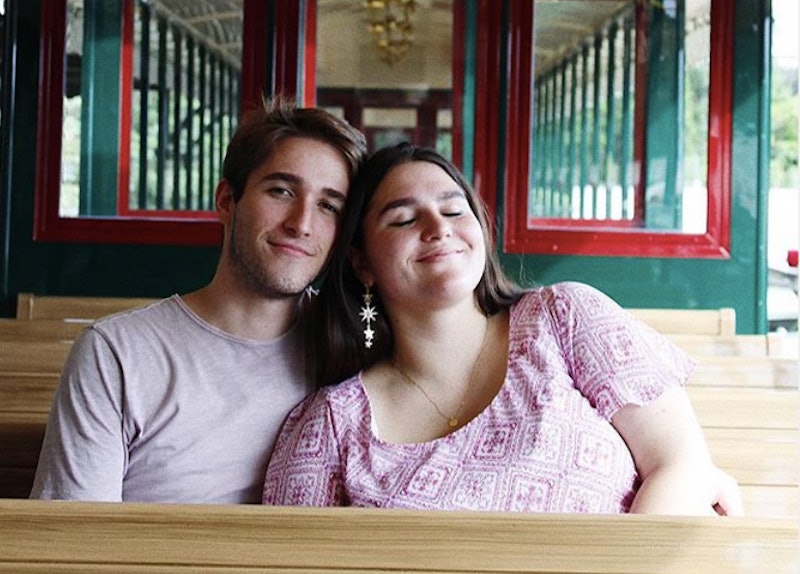 Morgan, 22, was visiting her boyfriend, Pablo, 23, in Madrid when COVID-19 hit. They’d just been notified by the Canadian government that his visa to join her in Canada for a year had been approved and were excitedly planning their next steps. But the pandemic rapidly escalated, with the Spanish federal government ordering a complete lockdown on March 14. Within a few days, they’d packed up Pablo’s apartment, moved him back to his small hometown of Villajoyosa, and Morgan found herself escorted by military police as she boarded a plane back to Vancouver.

Morgan and Pablo are one of many transnational couples whose future has been thrown into question by the novel coronavirus. Between travel restrictions worldwide and specific visa restrictions in the United States, thousands of couples are wondering: “What do we do now?”

“Because I was in a long-distance relationship prior to coronavirus, I try to tell myself that my relationship has been preparing me for this,” Morgan tells Bustle. “But it feels like my life is on hold right now. And his is as well.”

For Lauren, 28, a flute player in New York and her fiancé Jasper, 31, a musician in Copenhagen, Denmark, the pain of being apart is exacerbated by the fact that they don’t know when or if the US government will start processing visas again. The couple started the application process for the K-1 fiancé visa in November 2019 and were told by their immigration lawyers that the entire process should take about eight months.

But, reflecting the Trump administration’s anti-immigration stance, visa applications have been taking longer than normal — and processing for both non-immigrant and immigrant visas have been put on hold indefinitely. And with the onset of COVID, the National Visa Center suspended many of its services. Lauren spent two months trying to reach someone there, only to finally get through at the end of June and be told that while they weren’t sending out notifications, they did have her case.

It’s been a nightmare because we can’t plan anything.

“It’s been really hard,” Lauren tells Bustle. "I’m the type of person who really likes to plan everything and have everything nice and orderly. It’s been a nightmare because we can’t plan anything.”

While being apart from the person you love is difficult, Lauren tells Bustle that not being able to hunker down with Jasper in the midst of a pandemic is particularly painful. She’s had to weather the same ups and downs that everyone has faced over the past few months, but with her partner on the other side of the world. Additionally, her father just went through a non-COVID related heart transplant, so she feels like “it’s been one thing after another.”

“In a global pandemic, you want to spend time with your fiancé, and it’s hard not to have that,” Lauren says. “I’m also really proud of us that here are these major obstacles thrown at us, and we feel even stronger as a couple. Just as in love, if not more.”

Before COVID, Danielle, 27, a financial planner from New Jersey, was planning on moving permanently to France to be with her fiancé, Nico, 28, a lawyer. But between the lockdown on travel and the fact that France has paused on processing visa applications from the United States, they’re not sure what’s going to happen. And in the meantime, the difference between how the pandemic is being handled in France and how it’s been handled in the United States is taking a toll on their relationship.

“France is starting to get back to normal, but we’re basically still on lockdown,” Danielle tells Bustle. “He’s now going out every weekend, and I’m still stuck at home. I can see some friends, but it’s not back to normal. It’s hard for me to call him when he has lots of plans, and I’m at home doing nothing.”

Morgan says that differences in experience were also a source of conflict for her and Pablo. Because the pandemic hit Spain before it hit Western Canada — and Spain was on complete lockdown, unable to even leave their homes for about two months — Pablo was extremely concerned and upset when she would spend time with her “COVID pod.”

We don’t have answers, so we spiral.

“He would text and be like, ‘You shouldn’t be doing this,’” Morgan says. “It got frustrating, but we were able to talk about it, communicate, and see where the other was coming from.”

While none of these couples know what the future holds, they’re all trying to hold on to some sense of normalcy — without completely freaking out.

“The world is so up in the air right now and so unknown,” Morgan says. “We don’t have answers, so we spiral sometimes. We have to catch ourselves like, ‘Hold the phone. We can’t predict any of this. We have to just wait and see what happens.’”

All three couples find themselves waiting, monitoring the news, occasionally spiraling — and waiting some more.

“I just want to marry him and have him here and start our life together as soon as possible,” Lauren says. “Can everybody please just do what they need to do for others?”