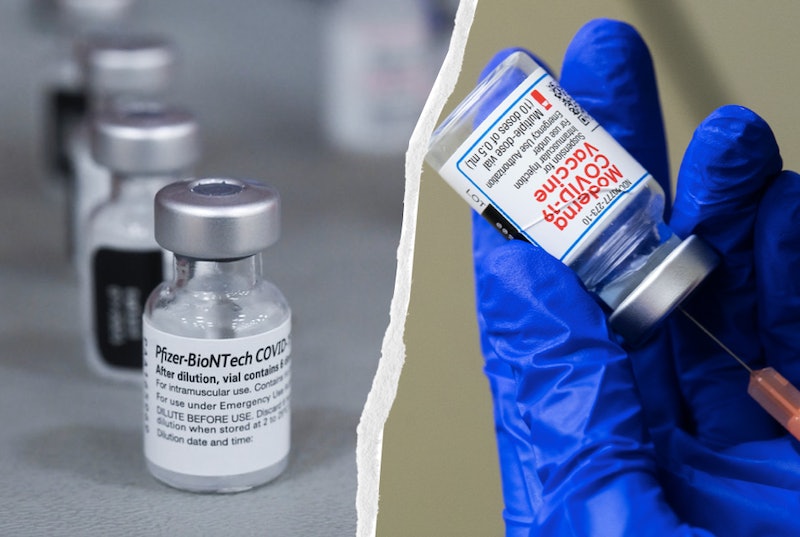 Gray, 33, jumped at the first available COVID-19 vaccine appointment she found, in March, which just happened to be a Pfizer dose. Then, her husband got vaccinated with Moderna. Her sister, and all of her friends? Moderna, too. She’s the only person she knows, she says, who has gotten Pfizer. “I guess Moderna is like the normie vaccine,” Gray tells Bustle, “and Pfizer has a little edge to it.”

While the happily vaccinated Atlantan is largely tongue-and-cheek with her take, the overnight memeification of vaccine brands suggests that as more Americans get vaccinated, they’re feeling uniquely bonded to others who got the same brand of COVID vaccine as they did.

Typically, people can’t choose which vaccine they get when they make their appointment. (That’s why doctors say “the best vaccine is the one you get right now.”) There have been 85 million Moderna doses administered in the U.S., compared to Pfizer’s 99 million, which means it’s more or less luck of the draw as to which vaccine you’ll have access to. But bonding with others who’ve gotten your same vaccine is not only a way to compare side effects and trade tips for dealing with them post-vaccine, but also seek out some human connection after a very hard year.

Annie*, a Co-Star astrology devotee, believes there’s a Zodiac-ish element to getting your shot. The 31-year old recently received the Johnson & Johnson vaccine and thinks her fellow one-jab comrades are all “inner social butterflies itching to spread their wings.” Annie specifically sought out a Johnson & Johnson vaccine because she wanted to be done after one dose. She adds that other people she knows who also got the Johnson & Johnson shot are “impatient” types like her who just want to go to a concert again. (The rollout of Johnson & Johnson’s vaccine was paused on April 13 following reports that six women developed blood clots post-shot out of nearly 7 million doses administered. Annie says she’s unconcerned with those “nothing” odds.)

For Jill*, a healthcare worker, getting Pfizer was another event that bonded her to her colleagues over the past year. Knowing they all got Pfizer, the first vaccine to hit the market, back in December “was really emotional and amazing after the year we had.” She adds, “It’s become another ‘we are all in this together’ thing.”

Laurie*, a teacher, was “somewhat ashamed” of that she was going to get Moderna at first, back in March, “since Pfizer had been getting a lot of press for being the best and most effective.” (Pfizer and Moderna have been shown to have basically equivalent efficacy rates.) “I didn’t bring up what brand I was planning to get unless I was asked.” But her opinion of the #ModSquad changed after she got her vaccine alongside her colleagues in her elementary school’s gym. “We’ve all been in the craziness and fearfulness of in-person school since August, and it was powerful to watch as each teacher, administrator, and chef received their shot and was welcomed into the after-shot waiting area with applause.”

The experience, the 36-year old says, underscored an important emotional touchstone of pandemic life. “I believe so many of us are looking for connections right now, regardless of how small or insignificant they may seem,” Laurie says. “Every time someone says they got Moderna, I feel instantly connected with them and can’t help but eagerly shout, ‘Me too!’”

Summer, 36, a Pilates teacher in California who hasn’t gotten vaccinated yet, says she’ll eagerly take whatever she can get, but she’s hoping it’ll be Moderna. “I fantasize that it will somehow make me closer to and or as talented as Dolly Parton,” she says.