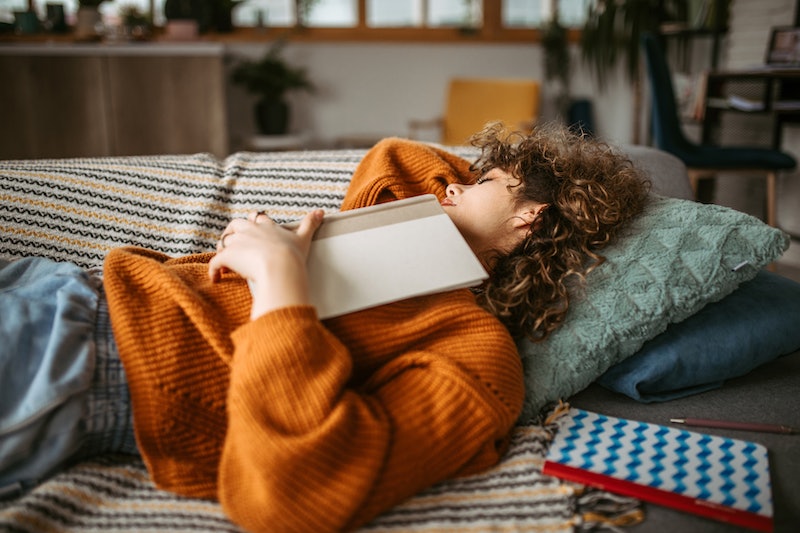 Leaving the house after, well, not leaving the house for over a year might require a level of energy you simply do not have. If you’re hungry for some social interaction, but you can’t peel your body off the couch, it’s time to master the art of the disco nap.

“The disco nap is my jam!” Tayla, 24, tells Bustle. “Pre-pandemic, after a long day of work, there was like a 0% chance I could stay awake long enough to party with my friends, [so] I relied on a pre-game nap,” she says. “The second I got my last vaccination, I texted my friends to plan a proper night out together, but after taking it easy during quarantine and going to bed early every night, I know I’ll be relying heavily on the disco nap to keep my eyes open,” she adds.

Essentially, a disco nap means having a quick siesta before you head out for that evening’s activities. If done properly, a pre-party snooze can conjure a second wind that you can ride right out the door. Done improperly, and you can royally screw up your sleep cycle.

“The ultimate goal is to have great sleep quantity and quality so that you don’t experience an afternoon slump and need to nap,” says sleep specialist Whitney Roban, Ph.D. But, she adds, if you had a bad night’s sleep, or need to muster the energy to follow through with plans in a pinch, a disco nap is a very legitimate way to recharge — so long as you don’t sleep too long or too late.

While you might be tempted to put off that disco nap until right before the disco begins, Roban says that the best time of day to take a nap is between 2 and 3 p.m., with the nap ending no later than 3 p.m. Keeping your nap early in the day will allow you to tire yourself back out before you have to go to bed, whether that’s at 10 p.m. or 2 a.m. And while there’s a little bit of flexibility there, depending on your personal schedule, the length of a nap should be 20-30 minutes, max. “You want to stay within your light sleep cycle during your nap so you wake up feeling refreshed and alert, not groggy,” Roban says.

To amplify the power of your disco nap, you can pair it with a cup of coffee or a Coke for a caffeine nap. It’s not intuitive, but caffeine usually takes about 20-30 minutes to kick in, meaning ideally, you’ll wake up right as your energy levels are soaring. Roban also suggests scheduling a caffeine-enhanced nap before 3 p.m., so you don’t have trouble falling asleep when you get home.

Roban strongly urges people to stick to that early afternoon nap in the name of sleep hygiene. But if every once in a while, the only time you have to nap is 6 p.m. ahead of your 8 p.m. plans, you’re not going to ruin your sleep game for good. Plus, Roban adds, "After the year we have all had, we could all use a disco nap and fun night out."

More like this
The Best Summer Workout Gear Of 2022
By Carolyn Steber
Plan C Vs. Plan B: What's The Difference?
By Lexi Inks
What Forest Bathing Is & Its Benefits, Explained
By Carolyn Steber
How To Decide Between Using White, Pink, & Brown Noise
By Carolyn Steber
Get Even More From Bustle — Sign Up For The Newsletter