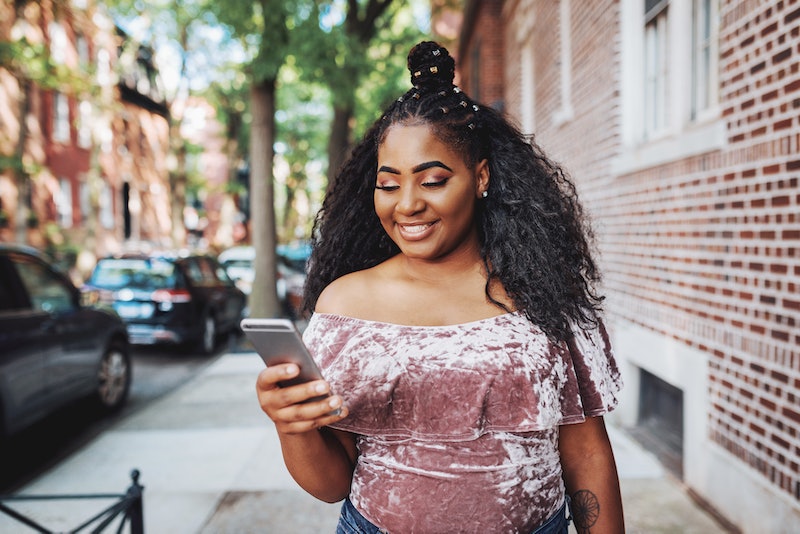 For some people, flirting over text comes easily and naturally. They always sound cute, fun, and sexy — seemingly without even trying. But for others, sending flirty texts can feel like a nightmare. If you fall into the latter category, chances are you hit send and then toss your phone aside in a panic. You want to flirt, but for whatever reason it stresses you out.

It may help to remind yourself that texting is an extremely low-stakes form of communication. “You have time to think about what you want to say and there isn't the added pressure of looking someone in the eyes,” Morgan Goulet, LMFT, a licensed marriage and family therapist, tells Bustle. Take a deep breath and try to have fun with it. “Confidence in yourself is important, but if you're not feeling confident it's OK to ‘fake it till you make it,’’’ Goulet says. “Once you get a flirty response back, your confidence will start to increase.”

Also, the more often you send flirty texts — whether you’re sliding into someone’s DMs, messaging matches on dating apps, or even flirting with a partner — the easier it’ll become. “Flirting is a skill,” Darcy Sterling, PhD, LSCW, a licensed clinical social worker and creator of Jealousy Boot Camp, tells Bustle. “Over time you learn what your personal style of flirting is, as well as what works and what doesn’t.” If you want to up your game, this guide to flirting via text will help get you started.

How To Initiate A Flirty Convo Over Text

Instead of diving in with a super flirty text, it might feel more natural to start off slow. Think of flirting as a dial that gets turned up, Sterling says, instead of an on-off switch. The goal is to build momentum by bouncing off what the other person says to create a fun interaction.

Keep the topics of conversation positive and playful, Sterling says, and find ways to show that you’re interested in their life. Ask about their day, ask how their evening is going — whatever you’d talk about if you weren’t trying to flirt. If they’re responsive and the conversation is on a roll, that’s when you’ll turn things up a notch by tossing in flirty one-liners.

Do you prefer to be sexy? Funny? Complimentary? Here are a few sample texts to use as inspiration. Try them out and keep experimenting until you land on the flirting style that feels best to you.

What Emoji To Use When Flirting

Speaking of winky faces, there are quite a few emojis that’ll help make your intentions clear. Up first? The “see no evil” monkey face. According to Ilana Dunn, co-host of the dating podcast Seeing Other People, this is a classic flirty emoji.

“It gives off an ‘aww’ factor that indicates you might be blushing or even slightly embarrassed or nervous about the message that you’re sending,” she tells Bustle. It’s the perfect follow-up if you said something like, “I’m so excited to see you again” or “I had a really great time last night.”

Next up? The two eyeballs emoji, which can be used to show intrigue. “Maybe they mentioned they’re getting off of work early tonight, they heard of a new restaurant they want to try out, or their plans for the weekend fell through,” Dunn says. “The eyes show that you’re interested in whatever they said and that you have a desire for more.”

And finally, it never hurts to throw in a smiling devil emoji, especially if your texts are really heating up. “The smiling devil is a great way to add mystery and playfulness to the conversation,” Dunn says. “It gives off a mischievous, spicy, or sexy vibe, depending on the context of the surrounding texts.”

What To Say If They Aren't Flirting Back

Let’s say you went out on a limb and sent a flirty text, but the other person didn’t respond with enthusiasm. Rather than continuing to flirt, Goulet recommends resuming your normal texting style. Dial it back and consider trying again later. They might be more receptive to flirting when they aren’t as busy or when they get to know you better, and it’s important to honor that.

If you really like this person, though, consider being up front and letting them know, either via text, on a Zoom call, or on your next date. As Goulet says, expressing your feelings will provide an opportunity for them to clarify their feelings, instead of leaving it up to assumptions. Who knows? Once you’re both on the same page, flirting via text may feel 100 times easier.