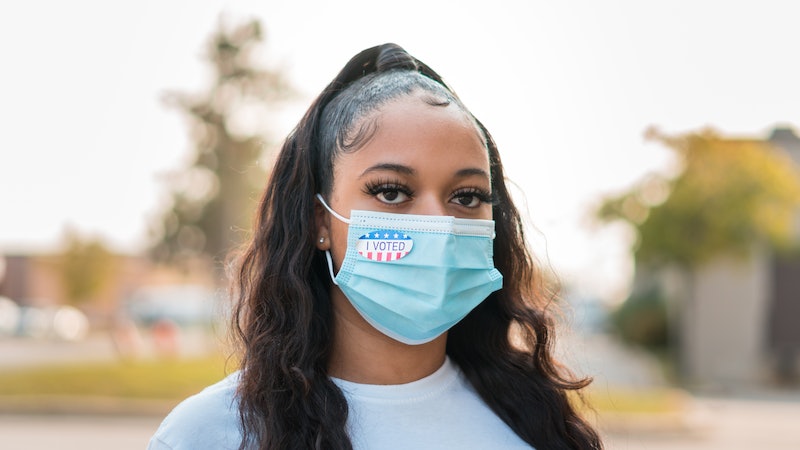 The last thing you might expect to hear in the voting line? A pick-up line. With everyone wearing masks and standing six feet apart, it doesn't seem like the ideal place to have a conversation, much less take a shot at love. And yet, voters are still getting asked out at the polls, all the same.

You'd think single folks would take a break from their dating game, especially on one of the most stressful and bizarre days of the year. But our collective nervousness and uncertainty about the future might actually be the reason why hitting on cute strangers suddenly seems so appealing.

Countless studies have shown that stressful times often make people come together, which is why casting a knowing glance at a fellow voter might turn out to be a bonding moment — and possibly even the start a long-term relationship.

In fact, stress might be the root cause of the many cuffing seasons throughout the pandemic. This year has seen couples settling down faster than ever — and even moving in together. Of course, as people are snagging phone numbers and scoring dates at the polls, you could simply chalk it up to boredom — or a really cute mask.

On Twitter, Lauren McCarthy, an editor at Nylon, says she was asked out while waiting in line to scan her ballot. She admired the person's confidence — it is, after all, super tough to ask someone out IRL these days — but she ultimately said "no thanks."

Love always finds a way to sneak into our lives, but it is important to respect people's boundaries. According to Psychology Today, women in particular tend to be skeptical of flippant pick-up lines, particularly the cheesy kind. So, if you saunter up and say something like, "Hey baby, you look independent, wanna join my party?" you'll probably be met with nothing more than a massive eye roll.

Judging by the meme Twitter user Quortne Hutchings chose to share, he wasn't too thrilled about being asked out at the polls, either.

And yet, there may be hope for the many single folks who are still standing in line. Twitter user @kstaura said she overheard a man talking to a woman while voting today. Apparently they hit it off and will be going on a date!

More like this
12 Active Date Ideas That'll Get You & Your Boo Outside
By Lexi Inks
TikTok's Voluntary Celibacy Trend Has Sparked A Movement
By Lexi Inks
How Ovulation Affects Your Sense Of Smell, Libido, & More
By JR Thorpe and Lexi Inks
18 Hinge Prompt Answers To Try If You’re Looking For Something Casual
By Lexi Inks
Get Even More From Bustle — Sign Up For The Newsletter
From hair trends to relationship advice, our daily newsletter has everything you need to sound like a person who’s on TikTok, even if you aren’t.