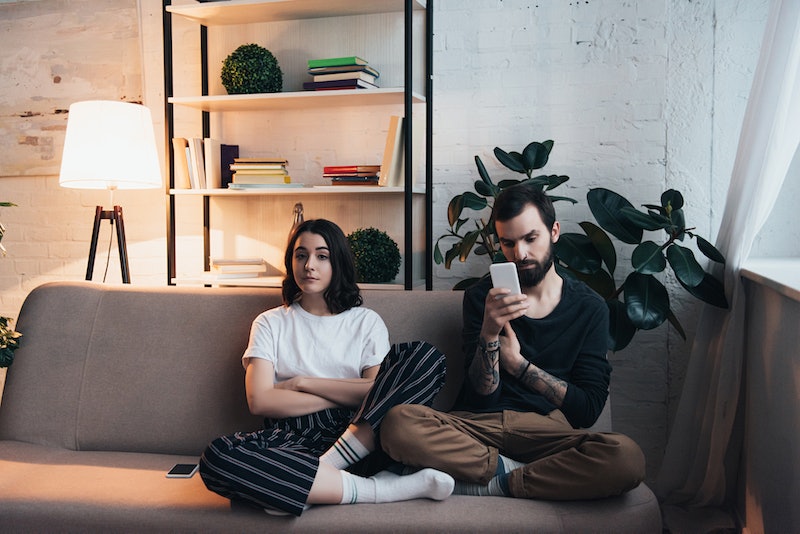 When Joyce, 28, met her boyfriend Nick, 35, back in February, she never imagined that they'd be living together by March. They were just a brand new couple, enjoying the early days of their relationship. But when shelter-at-home orders began, they prematurely had to discuss a huge milestone: Do we move in together during quarantine, or spend the next couple of months apart?

Joyce lives with roommates, while Nick lives alone, so the two made the decision to social distance at his place. It's only been a few months, but she says they already feel like "an old married couple." They've been keeping each other company, divvying up the chores, and have found that they mesh together really well. But Joyce admits moving in so soon put an early end to the light-hearted phase of dating, and made things feel serious.

Going from grabbing drinks on Friday nights, to discussing who will do the dishes has a way of "accelerating the getting-to-know-you phase of a relationship," Dr. Carla Marie Manly, a clinical psychologist, tells Bustle. But that doesn't necessarily have to be a bad thing. "On the positive side," she says, "couples are quickly tested on vital issues such as communication, tolerance, and daily habits."

It's been such a great trial run for living together.

However, such a quick change in the pace of a relationship can be tough, as it often highlights problems and can make red flags glaringly obvious. It can be too much too soon for many couples. But COVID-19 has created a rare situation in which the positives may outweigh the negatives, due to the side effects of coronavirus-induced stress. In times of uncertainty, Manly says people tend to come together and bond in profound ways. And while that's not true for everyone, it may help explain why so many couples feel closer than ever.

Emily, 26, and her boyfriend Khaled, 28, found themselves transitioning from a long-distance relationship to roommates when she returned from abroad due to COVID-19 fears. "We would have never moved in together had it not been for this extenuating circumstance," she tells Bustle. "In fact, we'd only been dating for six months!" Now, the two have adopted a cat, bought a car, and plan to keep living together post-pandemic. "We're helping each other cope with reality while trying to enjoy the little things in life."

Tara, 27, found herself in a similar situation: She and her boyfriend had never discussed living together before the pandemic began, but now they're sharing a place. "I think it helped us grow as a couple," she says. "I was a little concerned and not sure what to expect, but living under the same roof revealed all our little quirks and how we act when we have a 'bad' day much sooner than just seeing each other a few times per week."

Under typical circumstances, Manly says it usually takes up to a year to really start to know all sides of a person. But this is anything but typical circumstances. Although she plans on living alone again post-pandemic, Tara says the time she's spent with her partner helped her feel confident about their future.

"It's been such a great trial run for living together."