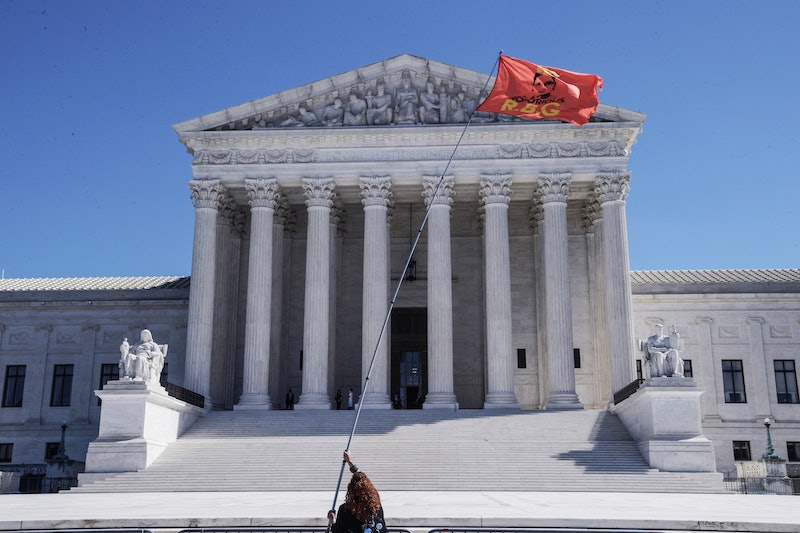 Nationwide grief for one of gender equality’s greatest legal advocates followed the death of Supreme Court Justice Ruth Bader Ginsburg on Sept. 18. But the justice’s passing has also provoked grave concern about the future of Roe v. Wade. President Donald Trump said he would announce his nominee to replace Ginsburg by the end of the week, and has pledged to only nominate judges who would overturn Roe v. Wade. Senate Majority Leader Mitch McConnell has promised to call for a confirmation vote by the end of the year.

Julie Rikelman, litigation director at the Center for Reproductive Rights, summarizes the situation frankly: “The truth is that this is a moment of great peril for access to reproductive healthcare. Roe v. Wade is actively on the line without [Justice Ginsburg] on the court.”

Should Trump have a nominee confirmed — before the election, during the lame-duck period before the next inauguration, or if he is re-elected — it could spell the end of Roe in one of two ways.

With a Trump-nominated Ginsburg replacement on the court, conservatives would have a supermajority of six votes, against three liberal justices. Even if Chief Justice John Roberts were to side with the minority, as he has with greater frequency the past few years, the conservative majority would still outnumber liberals 5-4. This paves the way for the majority to easily overturn the legal precedent set by Roe in forthcoming cases. In 2019, states passed a rash of laws banning abortion after six weeks gestational age — before many people even know they are pregnant — as direct challenges to Roe. Should just one of the cases challenging these laws reach the Supreme Court, Leila Abolfazli, director of federal reproductive rights at the National Women’s Law Center notes, it could lead to a complete overturn of Roe.

Rikelman says a key case to watch right now involves a law Mississippi passed last year, which is effectively a total abortion ban. The Center for Reproductive Rights blocked the law before it took effect, a move upheld by the federal court of appeals, but the state of Mississippi filed a cert petition asking the Supreme Court to hear their case. Should the court accept the case with a conservative supermajority in place, and the majority rules to let the ban stand, Roe could be done.

The other route has to do with one of the cases working their way through the federal court system that revolve around how abortions are performed. Some of these seek to ban dilation and evacuation (D&E) procedures after the first trimester, which would effectively ban second-trimester abortion. D&Es are the most common procedure to use for abortion after 12 weeks gestation. Should a future court rule to uphold any of these state laws, those restrictions could remain in place, which would render the undue burden standard in Roe “null and void,” says Abolfazli.

“If they add another Justice, they will say there are never too many burdens to put in the path of someone seeking abortion.”

There should be precedents against violating this standard. Both in Whole Woman’s Health v. Hellerstedt in 2016 and June Medical Services v. Russo in 2020, SCOTUS ruled that the nearly identical laws behind those cases, which required abortion providers to have admitting privileges to local hospitals, created an undue burden for people seeking abortions, and thus were unconstitutional. Rikelman explains that different rulings on future cases could effectively allow Roe to stand, just without its teeth. That’s why it’s critical to have members on the court who will see through re-trying cases that have a precedent — but already, that’s in jeopardy.

“It should have been a simple case,” Rikelman says of June Medical, which she argued, but “we had to fight incredibly hard to preserve the status quo. We had to get the court to say that they couldn’t allow two laws that are identical to be treated differently by the law.” That case was decided with a 5-4 ruling.

If everything goes right for liberals — if the Senate waits to confirm a nominee until after the election, if Biden is elected, if Democrats have a Senate majority to support a Biden SCOTUS nominee in 2021 — the country could be looking at a potential reset for the state of abortion rights. When it comes to the legal side of access, it’s not about ensuring that current rights are not stripped away, but setting up an expansion of reproductive rights, Abolfazli says. “To ensure that people have access just beyond their legal rights would require a dramatic expansion of the abortion care system in America,” she says, pointing to eliminating the Hyde Amendment and injunctions that regulate abortion differently from other kinds of care as expamples of that expansion.

Right now, Republicans are trying to see “how many hurdles they can put in the path” of someone seeking abortion care, says Abolfazli. “If they add another Justice, they will say there are never too many burdens to put in the path of someone seeking abortion.” Practically, that will mean “those who already struggle to access health care ... will be denied this care. The rich will continue to get this care. But those who are not will really face the continued harm of the erosion of the right to abortion.”

That’s why Abolfazli says ideally, the status of abortion access in the United States would have nothing to do with who sits on the Supreme Court. “The court is a component of expanding access, but not the sole decision-maker,” she says, noting that legislation is key to make these changes. “My dream world? That we’re no longer fighting for the strength of our rights at the Supreme Court but that that right is secure and there, and we’re instead fighting to expand the actual care that people can get,” where abortion access would be just one part of basic healthcare needs.

Already, reproductive rights organizations are collaborating with progressive members of Congress to pass the Women’s Health Protection Act, which would enshrine abortion access through a federal law that’d remain in place regardless of what happens with Roe. And Rikelman says that organizations like the Center for Reproductive Rights will continue to litigate state laws that restrict access to or place outright bans on abortion.

Still, time is of the essence. “This is now a fight to stop a nominee from getting to a vote before the election,” Abolfazli says. But the fight won’t end on Nov. 4 or Jan. 21. “Our institutions are not working the way they are supposed to.” She points to the discussion around court-packing, or adding additional judges to the Supreme Court to shift majority dynamics, as a way to reconcile the changes that need to happen to protect Roe V. Wade long-term.

While winning this battle won’t fix everything that’s currently wrong with abortion access, “it is part of the longer effort to procuring justice across all the issues we care about — racial disparity, access to health care including abortion, education,” Abolfazli says. “We believe that the Supreme Court should advance justice, and that’s why this situation feels existentially threatening. Trump will fill the court with someone committed not to justice, but to dogma, and so this moment has to be an existential threat to our general idea of democracy.”

“Justice Ginsburg was such a champion for access to reproductive health care and abortion specifically,” says Rikelman. “It’s important that the next Justice have that same sense of right in this country.”