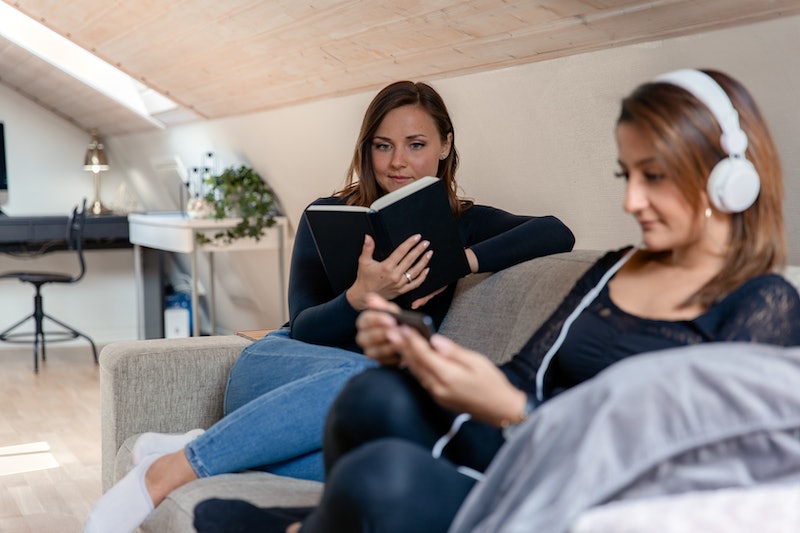 It can be so hard to let go of the idea that creating space in a relationship — and spending time away from a partner — is anything but negative. As a happy couple, you might think that you can and should want to do everything together. And if not, that must mean you’re mad at each other or headed for a breakup.

It’s precisely why your stomach sinks whenever your partner asks for space, or why they assume the worst and anxiously gnaw at their fingernails whenever you say, “I need time to recharge alone.” But don’t let built-in negative connotations about spending time apart (thanks, society!) hold you back from doing what you need to do.

“Especially now and throughout the pandemic, it’s so important to remind ourselves that we’re not meant to spend every waking moment with one person, even the one we’re in a relationship with,” Dr. Jaclyn Lopez Witmer, PsyD, a licensed clinical psychologist with Therapy Group of NYC, tells Bustle. “We all need some novelty and change in our lives to keep us energized, and having some intentional space for oneself in a relationship can be a really positive experience.”

If you or your partner is craving a moment alone, here are a few ways to reframe your approach and give each other space while still showing you care.

Talk About It First

To keep knee-jerk negative emotions at bay, start by talking about why space is important in relationships and why parting ways — even if it’s just for 15 minutes — is a good thing, Kati Meyers, a marriage and family therapist and life coach, tells Bustle. “Compromise is key,” she says, so keep talking until you both feel satisfied and fully understand what each other needs.

Come Up With A Plan

What might space look like? It’ll depend on your situation, including whether you live together, separately, or are long-distance. You might just need those 15 minutes, or you might need a bit more time to yourself. Space might mean calling each other less often or only hanging out on certain days. It might mean drinking a cup of coffee by yourself in the morning, without interruption. Be honest and then lay out some guidelines you can both agree to.

Don’t Ignore Each Other

Spending time apart certainly doesn’t mean you have to ignore each other, especially if that would give rise to insecurities. So instead of silencing your phones and completely falling off the face of the earth, consider each other’s feelings and “keep the lines of communication open,” Meyers says.

If you choose to spend the day with friends, for example, you might agree to step away every couple of hours to check in and answer each other’s texts. This is one way to maintain a sense of connection, even when you’re off doing separate things.

Another way to show you care is to be clear about when you plan to reconnect. If you both know what to expect, it’ll be easier to enjoy the solo time without feeling anxious or rejected, Steven Reigns, MA, a licensed psychotherapist, tells Bustle. Structure and staying true to your word will show that you’re considering each other’s emotions.

Make It A Positive Experience

Remember to talk about space positively, Meyers says, instead of making it seem like a punishment, or as if the time apart is some sort of “break” from your relationship. You aren’t spending time apart because you’re sick of each other or because you’re bored, but because you want to maintain a healthy balance.

Use positive language. And again, make sure you communicate effectively about what’s going on and when you’ll reconnect. You could say something like, “Hey love, I’m pretty tired, so I’m going to put my phone down and watch Netflix, but I’ll text you in a few hours!” This reads so much better than a negative text — or no text at all.

Be Open To Feedback

As you begin experimenting with giving each other more space, “let your partner know that you are open to feedback,” Meyers says, and don’t hesitate to share your thoughts and feelings as well. It might be necessary to tweak your plans if you feel rejected or experiencing separation anxiety. But if you trust each other and talk about it openly, you can figure out a way to spend time apart and still show you care.