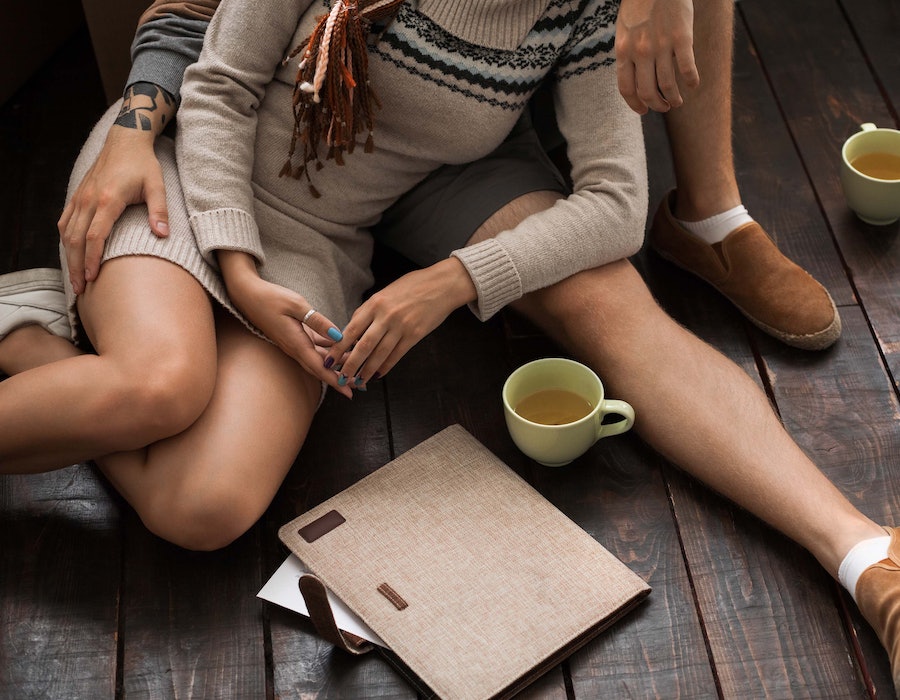 Milles Studio/Stocksy
So You Want To Quit Your Job

Back in 2011, before widespread burnout and the ensuing Great Resignation, Tai McNeely left her job in finance. She was in her 30s at the time, seven months pregnant with her second child, and had accidentally broken her foot. Her husband, Talaat McNeely, urged her to quit. (For as long as they’d been married, he’d told her she could be a stay-at-home spouse.) At the time, Talaat was in the midst of a career change himself, out of work to get a degree in education. So for six months, their Chicago family of four lived off their savings, Tai says. But once Talaat began substitute teaching and eventually landed a full-time role as a special education teacher, Tai made the switch permanent. She’d already seen them thrive as a one-income family.

The McNeelys had already been squirreling money away into savings prior to the change, but after Tai quit for good, they reorganized. The couple opened multiple bank accounts dedicated to specific uses: vacation, dining out, personal. Tai’s biggest piece of advice: Plan for the unexpected.

In the decade since, many couples have followed the McNeelys’ lead, transitioning from dual-income to single-income households, a shift the pandemic has accelerated. According to the U.S. Bureau of Labor Statistics, nearly 10% of U.S. families had an unemployed member in 2020 — doubled from 2019 — and 8.6% of married couples had an unemployed member. And this past December, an additional 4.3 million Americans quit their jobs, nearly matching the record-breaking 4.5 million Americans who quit in November.

Below, four couples who’ve recently switched to a one-income setup explain how they’re making it work, from forgoing home repairs to taking advantage of public services.

Olivia and Victor Kirksey, who are both 31, worked as junior faculty members at universities in Atlanta, Georgia. They have a 2-year-old child. Victor quit his job in June 2021.

After graduating with our doctoral degrees in health policy and community health and having our first child, we both took our first jobs in January 2020 as junior faculty and were happy. We were making $55,000 apiece. By March the pandemic hit and we were thinking this may not be where we want to be. Victor quit in June 2021. I [Olivia] ended up staying. We have health insurance through my employer.

We made a budget with a 12-month plan. We were $15,000 off, which is a lot, so we adjusted by downloading Mint and keeping a more watchful eye on our budgeting process so we could learn where to cut costs. We wrote out all of our expenses and the due dates. Whatever we make, we split half down the middle and put it in savings. The other half pays the bills. We want to tuck over some money into savings in case of a family emergency.

On Sunday nights, we plan out our meals for the week ahead. We utilize leftovers. We eliminated some subscriptions, like Netflix and Disney+, and utilized COVID-19 relief with all our credit cards. We’re not the type to abandon our bills, so we reached out to our creditors to let them know we’re facing some challenges, and they were able to work with us. You don’t want to leave them to the wayside because it’ll end up messing with your credit.

We’re also part of a few Facebook groups, some that are [for] extreme couponers, which have lots of deals or coupons. That community has really helped.

Beth, who’s 34, is working as a software developer in Pennsylvania. She’s married without children. Her wife quit her job in early 2021.

In July 2020, I was making around $65,000. It was a good and stable job with excellent benefits. After a year, I began looking for a new position. The new job [raised my salary] to just under $100,000, but the benefits were not nearly as good. I decided to keep both jobs.

When my wife and I first moved in together after she graduated from a master’s program in 2017, she started a health care job in crisis management. She has a mental health diagnosis, and the stress of the job was too much. She found part-time work, working with senior citizens, which was a much better fit. That lasted for a few years and then, in March 2020, she [lost] regular employment, [and] in early 2021, the stress of 2020 and her job situation caught up with her, and she was hospitalized. After she got home, she was no longer employed and needed to recuperate. [Earlier this year], she began some part-time work, earning about $100 a week, but it isn’t factored into our budget.

When my wife and I moved in together, I made sure our bills never went above what I could handle on my own. We have a mortgage at $1,000 per month, utilities at about $600 per month, and groceries and household supplies at about $1,500 per month. In 2021, we got married and did some home renovations, so we pay about $500 a month toward the home equity line of credit. We spend about $300 a month on pets. We both have student loans, with a combined debt of about $150,000.

My income covers everything. I use YNAB [You Need A Budget app] religiously to keep track of everything. We have discussions that will look like, "Our grocery category is running low, might want to go shopping in the downstairs freezer between now and payday.”

My wife wants to feel like she contributes, and changing that [perception] from monetary, quantifiable contributions to unpaid household labor has been an exercise for both of us. [My recommendation for others is to] thank each other for everything. Notice your partner folded the laundry you started? Thank them specifically for the folding. Did they get dinner going while you were busy? Say thank you. It’s not hard and takes the emphasis of contribution away from money.

Brooke Frederick, who’s 36, was working as a marketer in Edmonton, Canada. She’s married with a 1-year-old son. She quit her job in January 2022.

I worked at a digital marketing agency, but as COVID-19 hit, I struggled with my mental health, which forced me to reduce my hours and take a stress leave. [During that time period], I got pregnant and started maternity leave. My employer let me know they are requiring staff to be in office full-time. It would mean leaving my son. I resigned a month ago when maternity leave ended.

My husband is the chief of staff at a private cardiology clinic. He makes $140,000 CAD per year [roughly $110,000 USD], though some of it is from a bonus. He takes home $6,200 CAD a month. Our fixed costs are mortgage, utilities, and car [payments]. We were putting around $2,000 CAD a month toward debt, which we can’t do any more. Our monthly budget is about $6,000 CAD to pay minimums on credit cards and loans, living expenses, and a bit of spending — but not a lot.

Living on a single income meant pausing half-completed home renovations, sitting out vacations, and giving up the luxury of having a home cleaner come each week. While some deem meal kits more expensive, we found they’ve been a great solution for us. We lean on price-match apps, such as Flipp, to find where each item is cheapest. We’ve had to put buying a new home on hold, and have taken a minimalist approach to baby stuff, purchasing it predominantly secondhand. I would typically go to the chiropractor, physical therapy, and psychologist regularly, but cannot go as frequently.

It’s frustrating at times: Our bathtub leaked a bit onto our living room ceiling, and we haven’t been able to get it repaired yet. When I feel frustrated about not having the money for certain things, I always come back to the thought that those items are fleeting, and my emotions around the situation are my own choice. I also remind myself that it was my choice to resign, and if I want to put my son in day care and return to work, I can.

The Woman Who’s Sick Of Hearing About Her “Trophy Husband”

Kat Tretina, who’s 36, is working as a freelance writer in Orlando, Florida. She’s married without children. Her husband quit his job in November 2019.

I’ve been freelancing full-time for three years. My husband worked as a pastry chef at a resort. The first year I was freelancing full-time, we were both stressed, our house was a disaster, and we were eating takeout all the time. My income was steadily increasing and we thought about how much more I could make if I had less errands and domestic work. Quitting his job was a way he could take some of that on.

We made sure we had at least three months in savings, which would cover all of our expenses. I encouraged him to stay part-time, just 10 hours a week. That way if I got sick and wasn’t able to work, he would be able to go back to full-time without having a huge gap on his resume.

At first I was so worried about finances, so we made a lot of slashes to the budget. We stopped eating out completely. We stopped all extra spending to keep things lean. I was worried about our health insurance, because I have to buy it on my own and he previously got his coverage through his employer. Our premiums are [now] $1,400 a month for the two of us. Within the first year, our household income went from about $100,000 to over $200,000, even though he had stopped working full-time.

One of the most challenging things we deal with, particularly because I — the woman — am the one making the money, is how strongly others react to that. Everyone from family to complete strangers feels comfortable saying, “You're the trophy husband.” You need to make sure that you’re both very secure in your marriage and came to the decision together, because external pressure could be really rough. When you have a stay-at-home partner, it’s also easy to think they’re resting and don’t need a break. They are working, and he needs a break [from the domestic labor duties] sometimes.

Correction: A previous version of this article mischaracterized one couple’s financial status and lifestyle choices. Their story has been removed from the article.

More like this
12 Active Date Ideas That'll Get You & Your Boo Outside
By Lexi Inks
Savannah Guthrie Got Her First-Ever Tattoo With This Former Wild Child
By Suzanne Zuckerman
5 Signs You Have A Toxic Relationship With Yourself
By Lexi Inks
18 Hinge Prompt Answers To Try If You’re Looking For Something Casual
By Lexi Inks
Get Even More From Bustle — Sign Up For The Newsletter
From hair trends to relationship advice, our daily newsletter has everything you need to sound like a person who’s on TikTok, even if you aren’t.