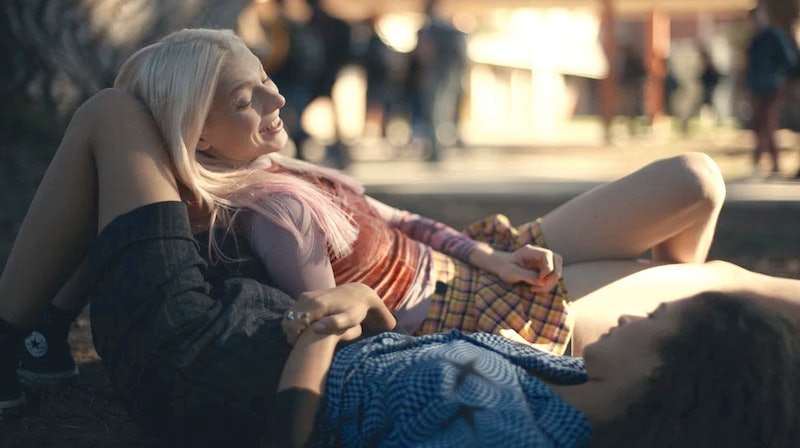 If you've ever had toe-curling, headboard-banging, amazing sex with someone you were into, only be told that they aren't actually looking for a relationship, you may already know the difference between sexual and romantic attraction. (And the importance of talking about your intentions before getting frisky with someone.)

Whether you're down to hook up but don't want to seriously date, or you feel super smitten but aren't trying to have sex, it's totally possible to feel one type of attraction to someone without feeling the other.

As Stephenson shares, feeling sexually and/or romantically attracted to someone means different things for different people. Perhaps you feel sexually attracted to multiple or all genders, but only desire to seriously date certain genders. Maybe you're down to hook up with someone but don't want anything more than that, or you're into someone but don't want to get physical.

Take asexual people, who often don't feel a sense of sexual attraction but may enjoy having romantic relationships with others. Or aromantic folks who may enjoy having sex but may not have a desire to be in a romantic partnership.

"People can have a variety of orientations," Jor-El Caraballo, co-creator of holistic wellness center Viva Wellness and LGBTQ therapist, tells Bustle. "Sexuality is one orientation. Romantic orientation is another."

"You can experience sexual attraction to someone but not have a romantic interest in them — a casual hook-up is a good example," Caraballo says. "And vice versa, you may have a strong affection for someone but not necessarily desire a sexual relationship with that person."

Dr. Melissa A. Fabello, sex and wellness educator, tells Bustle that one's sexuality is formed from an array of interconnected experiences and identities.

"We tend to think about relationships in very strict terms, but, in reality, there is a lot of variety in how people engage sexually and romantically," Fabello says. "All of those ways — so long as everyone involved is safe — should be acknowledged and celebrated.

Per Fabello, the difference between sexual and romantic attraction can be understood using something called the split attraction model (SAM).

While the SAM isn't perfect, Fabello says it can be useful for people who experience sexual and romantic attraction separately. Because sexuality is such a complex and layered thing, structures (like the SAM) can help people guide their conversations and better express themselves and their needs.

"Language will never suffice to describe the human experience because it's much too vast," she says. "But the more words we have to choose from, the more likely we are to find something that fits."

Knowing the words or labels to express your sexuality can help you communicate your needs and experiences more specifically. While it's good to want to better understand someone's sexual identity, it's imperative to give people space and support to define their experiences for themselves.

"If someone expresses their sexual experience to you in a way that feels confusing — or even problematic — it's OK to challenge that. But it's never OK to refuse or reject a person's experience just because it doesn't make sense to you," Fabello says.

In other words, when your friend says something that fetishizes their new crush or your date makes a biphobic joke, it's completely appropriate to call them on it. But if someone is trying to express themselves to you or you or shares experiences that you don't personally understand, shaming or dismissing what they are saying can be incredibly harmful.

"It’s important to validate someone when they tell you their identity," Stephenson says. "Having a more nuanced understanding of your own sexuality helps you communicate your needs and desires to other people more effectively."