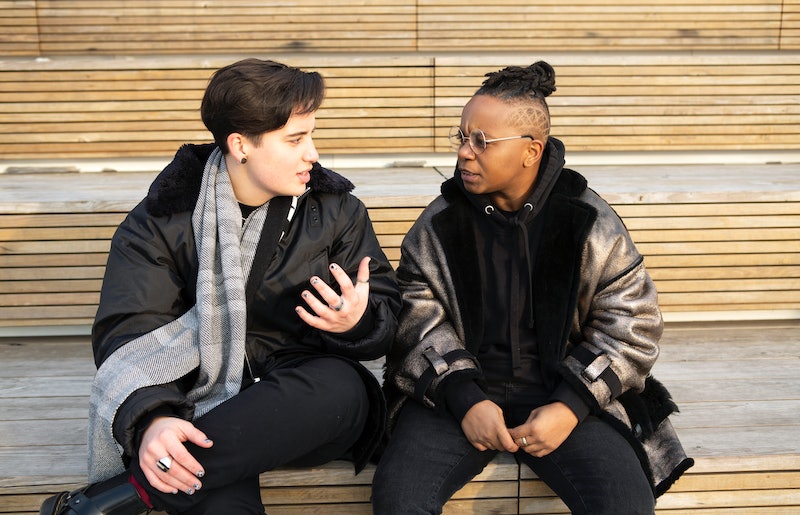 In this week's Sex IDK column, Emma McGowan, certified sex educator and writer, answers your questions about how to figure out if you're pansexual or bisexual.

Q: What's the difference between pansexual and bisexual? How do I figure out which one I am?

Figuring out your sexuality — or even just what to call it — can be a long and evolving process. But the bisexual/pansexual debate is a relatively new one. So, let’s take a look at the similarities, the differences, and help you figure out the best label for you moving forward.

First: Basic definitions. While there’s no universal definition for either bisexual or pansexual, I’m going to give you a starting point by breaking down the words themselves. “Bisexual” means you’re attracted to both men and women, hence the “bi,” which means “two.” Pansexual means you’re attracted to people all along the gender spectrum, hence “pan,” which means “all.” Pretty clear, right? Ha! Keep reading.

Bisexual was the primary term for people who were attracted to more than one gender for much of the 20th century. But in the first two decades of the 21st century, we made really big strides in acknowledging the fact that the gender spectrum is wider than a binary of “male” and “female” and that it isn’t necessarily linked to biological sex. (For example, someone can be assigned female at birth and actually be a man or someone who was assigned male at birth could be non-binary, which means they don’t identify with either gender.) And with that acceptance of a broader gender spectrum, many people now identify as pansexual.

Of course, it’s not so simple as that. Some people feel that the term bisexual is transphobic because it’s based on the idea of the gender binary, aka there are only “men” and “women” and bisexuals are attracted to both — but not to people outside of those categories. Those people firmly believe that bisexual is an outdated term, and people should re-identify as pansexual.

But many bisexuals — and particularly those who came of age before our culture was acknowledging a broader gender spectrum — have been saying, “I’m attracted to the person, not the gender,” for as long as they’ve known they were bi. And many bisexual people have had sex with or dated non-binary people, trans people, and cisgender people alike. As a result, they don’t feel a need to change the way they label their own sexuality, and many people feel that “bisexual” and “pansexual” are pretty much synonyms.

Other bisexuals might choose to stick to the term because they don’t find that they’re attracted to people outside of the gender binary. I don’t believe that any of us have the right to tell another person that they have to be attracted to a certain group, period.

As you can see, there are many possible labels for sexuality these days; it’s why that LGBTQIA+ acronym seems to keep growing and growing. And that’s awesome! While an ever-expanding list of options can be overwhelming for the individual who’s trying to figure out their own sexuality, it’s also a net positive for society — which brings us to the question of your label for your sexuality, reader. Unfortunately, I can’t write out a step-by-step process for you to figure out if you’re bisexual or pansexual, because there isn’t one. Instead, I recommend doing some introspection. Who do you find yourself attracted to? What are their genders? Are there groups you’re not attracted to? And then think through our conversation here and decide which term resonates the most with you in this moment.

Because while choosing a term feels momentous the first time you do it, your label for your sexuality might change over time. That’s also totally fine. Or, as is the case for some current pansexuals who used to be bisexual, the terms themselves evolve! So pick one (or two! or even three!) right now and use it for as long as it serves you. Don’t let anyone else tell you that you have to do otherwise.

More like this
How Getting An Abortion Has Changed From The ’60s Through Today
By Amanda Chatel
What’s An Open Relationship, Actually?
By Lexi Inks
Passive Aggressive Examples To Look Out For In A Partner
By Jessica Estrada
Are Quality Time & Words Of Affirmation Love Languages Compatible?
By Lexi Inks
Get Even More From Bustle — Sign Up For The Newsletter