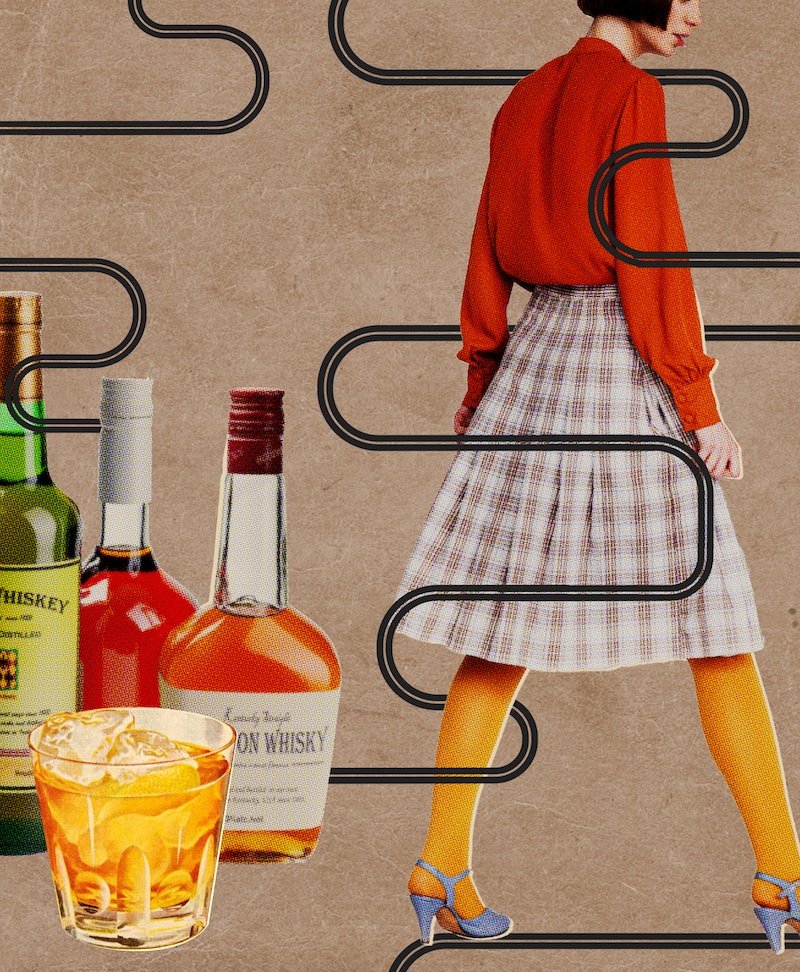 A decade ago, when I was in my mid-20s, five drinks was normal for a Tuesday, and 10 on a Saturday evening was considered a relatively tame night out. I knew I had a problem, and so did a lot of people around me. The therapist I was seeing at the time refused to continue sessions unless I sought treatment, either through a rehab facility or at least by going to an AA meeting.

There was no dramatic episode that made me realize enough was enough. For me, it was too much of the same: another fledgling romantic relationship destroyed by too many drinks, followed by a crying jag. So, the summer I was 28, I explored AA, read a lot of books, and found a new therapist who helped me unpack the depression and anxiety that fueled much of my drinking. While she never used the term, she allowed me to explore the concept of moderation — giving myself challenges to have only one or two cocktails at a party, talking about how that felt, and providing a safe space to talk through regrets instead of giving rehab ultimatums. Ultimately, that freedom gave me the courage to explore full sobriety. I was able to quit for a few months at a time.

But a moment always came when total abstinence got too difficult — which would lead to blackouts, broken phones, and waking up with a “what did I do last night?” feeling of dread. I decided that, for me, moderation — in tandem with a commitment to self-care and prioritizing my mental health based on the lessons I learned in therapy — made the most sense. I began drinking more or less in line with my peers. I stopped seeing that therapist due to a move and barely touched on alcohol with the new one I found. Yes, there were some nights of too many glasses of wine, but for the most part, it was a craft cocktail ordered at dinner, a glass of wine on the couch during a gossip session, and an overall satisfaction that I was able to manage my consumption without practicing full sobriety.

When I was 31, I became unexpectedly pregnant. (My daughter’s conception was not alcohol-fueled.) For me, being able to go on dates, flirt, and have sex without the aid of booze had been one of the biggest shifts from my exploration of moderation — and a positive sign for me that maybe the practice was working. But is it really possible to drink moderately, especially after you’ve had a problematic relationship with alcohol?

Annoyingly, the answer seems to be “it depends.” Self-directed peer support groups like Moderation Management have been around since the 1990s, though when its founder Audrey Kishline drove drunk and killed two people in 2000, it seemed to suggest moderation couldn’t work after all. After Kishline died in 2014, the movement rethought its approach and found a new life online thanks to a Centers for Disease Control and Prevention (CDC) report and National Institutes of Health (NIH) campaign about binge drinking. “Moderation Management is peer support and harm reduction. We’re all striving to reach a healthier, safer level of drinking,” says Moderation Management Executive Director Mary Reid. With the explosion of social media, MM has reached younger members and been able to provide a haven, via private Facebook groups, for people who may have felt stigma or lived too far away to be able to attend a physical meeting.

Other moderation-friendly movements have proliferated on social media. There are Dry January and Sober October challenges. There are alcohol-free cocktail mixes and “mindful” imbibing. There is being sober curious. All of this is what I felt was missing from the conversation when I first explored moderation — that and the ability to speak to my drinking concerns out loud. I wish this transparency had been more widespread in my 20s. If I had seen examples of moderation in action, would I have been able to curb my boozing years before it became a problem? Would a therapist have been more willing to redirect me to these types of programs instead of insisting I go cold turkey? I don’t know.

My daughter is now 6, I’m in my mid-30s, and I barely drink. I didn’t at all during my pregnancy, and rarely during her first year. During the pandemic, my alcohol use went down because the only time I’m tempted to imbibe is when I’m around other people — a beer at a barbecue, some wine during a girls’ night. I drink less than once a week.

If I had seen examples of moderation in action, would I have been able to curb my boozing years before it became a problem?

And yet. Some moments haunt me, even now, in my new “normal life with alcohol” — the work party, for instance, where I overdid it at the open bar and ended up crying in an Uber to a brand-new work acquaintance. Even the low-key evenings, when I stick to my two-drink rule, make me question my relationship with booze. Sure, I “only” had two — but it took a lot of self-control not to get a third, or fourth, or fifth. Deep down, I still wonder: If I’m so “normal” about my alcohol consumption, why am I thinking about it so much?

Despite the CDC’s research on alcohol dependency, some experts believe that people who have issues with booze and substances will always have issues, no matter how much they abstain and no matter how “normal” their drinking looks to outsiders. “There are genetic and environmental factors that can increase the risk of substance abuse and make some people more vulnerable than others,” says Dr. Indra Cidambi, M.D., an addiction psychiatry specialist and founder and medical director of Center for Network Therapy, a New Jersey outpatient rehab center. For some, substances can be used to mask other mental health conditions, including anxiety and depression, and are primarily used as a means to self-medicate. But because substances change the structure, function, and hormonal balance of the brain, it’s not as simple as just treating the underlying condition to “cure” the substance misuse. Plus, a 2012 study by the University of Cambridge suggested that people who turn to substances have different wiring in their brains to begin with.

These complications, together with the difficulties of sustaining moderate drinking, are why many experts are wary of this approach for those who have had a problem in the past. “Perfect moderation is much more difficult than abstinence,” says Dr. Adam Scioli, D.O., associate medical director and psychiatrist at Caron Treatment Center, a substance misuse provider. Other experts also feel that many people may not truly understand what “moderation” looks like. For example, the CDC defines moderate drinking as one drink or less a day for women and two or less a day for men. A “drink” is the equivalent of 5 ounces of wine — not the XL pours you get at a restaurant or the Olivia Pope-size goblet you sip on your couch. And per day is key. “This doesn’t mean you can save all your drinks for the weekend,” reminds Cidambi.

So, moderation doesn’t mean less frequent binge drinking, it means never binge drinking. Why? Because if you’ve had a problem with alcohol before, this is when experts say it may be time to consider that you may have a more substantial substance abuse problem. This is something I worry about in my own life. In my 20s, at the height of my boozing, I had one or two messy nights a week; now, it’s more like one or two a year. I justify them because they only occur when my daughter isn’t with me, because I would never drink and drive, because the worst consequence of a night of overdoing it is a hangover. But when you have a history of problematic drinking, there’s always the concern that a “one-off” becomes a “new normal.”

At this point, I know alcohol will always have the potential to be a problem for me, even though I now consume moderately. I can turn down wine. I don’t “need” a beer to loosen up. But when I do drink, there’s a “more, more, more” voice in the background of my brain. And although I can override it, I can’t always ignore it. Plus, the worst effects of those sloppier nights are what they do to my brain. Someone who was never told they were an alcoholic would shrug it off, but I always wonder if an extra cocktail is a sign that I’m slipping, that I’ve gone too far, that I’m back to the world of blackouts, which is terrifying to me, especially when the stakes are so much higher as a parent.

So why don’t I just give it up? I don’t know the answer to that, either. Because I like the buttery taste of chardonnay. Because margaritas sometimes taste better than mocktails. Because for every hazy episode, there are 50 fun evenings. Because I’m a solo parent juggling an unstable career and I need a break.

For whatever reason, I’m not ready for sobriety. But I also know that in choosing moderation, I’ve swapped overdrinking for overthinking: Alcohol is still taking up mental real estate. Sobriety, sometimes, does seem like the more black-and-white option, albeit not the easiest to act on. Moderation, for me, is a path that feels mostly doable, but it’s also a messy mental gray area — and far from the simple solution it may seem on the surface.