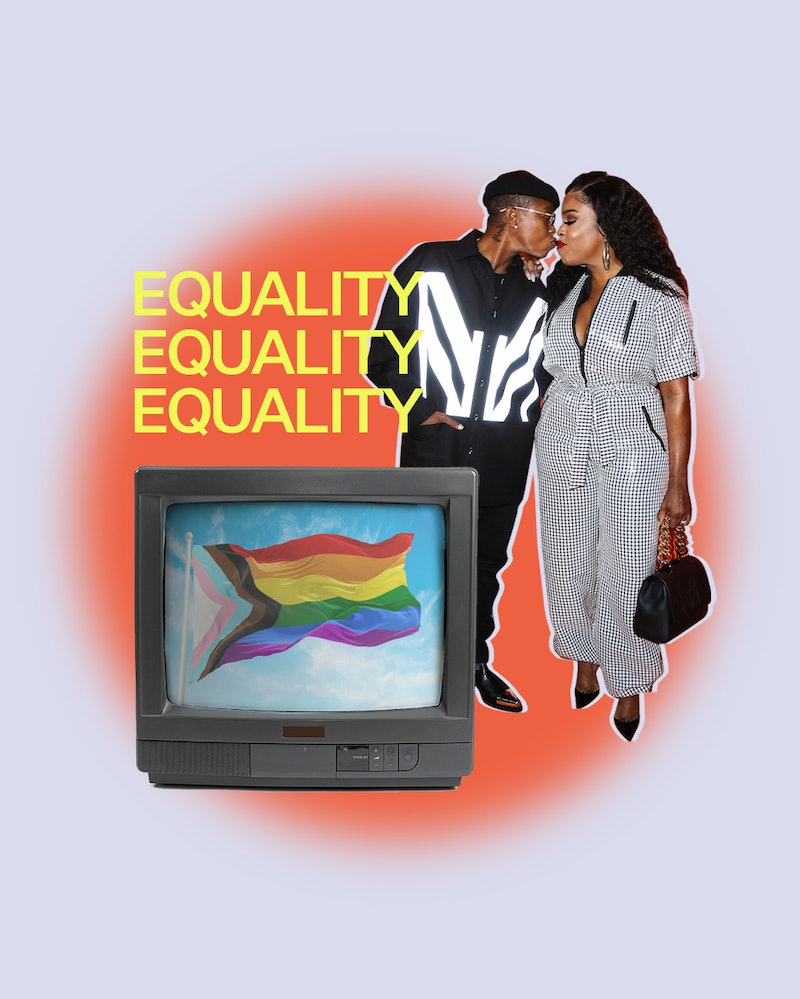 When I was nine years old, I was asked to write an assignment about my idol in primary school. I chose Marion Jones, the American former world champion track and field athlete who had won multiple gold medals (which would later be stripped from her). She was my idol because she was Black, mostly had her ponytail up like I did, and we had a shared love for athletics. I even mimicked her running style, which was strong, focused, and very fast. I saw so much of myself in her growing up.

But there was always a disconnect for me. These women who I looked up to growing up were mostly married to men, and part of me was disappointed because I felt I was different from them after all. Was I not normal? “Maybe I’m not supposed to be a girl,” I told my mum at the time, who brushed my comment off and changed the subject.

I was a tomboy having a hard time growing into my femininity, and so I looked towards women in sports who looked like me. I didn’t like wearing dresses or skirts, so my mother bought me bagging jeans, Arsenal football jerseys, tracksuits, and hoodies, which I would wear for most days as long as I could. But growing up in the Mormon church – which prohibits women and girls from wearing trousers – meant that wasn’t always possible. I was forced to wear dresses or skirts. One particular outfit that stands out for me was a Burberry kilt that my mum bought for me, which I wore with a white shirt that had a floral collar. It was extremely important to my mum that we looked our absolute best on a Sunday, and that meant that my femininity had to shine through.

“Maybe I’m not supposed to be a girl,” I told my mum at the time, who brushed my comment off and changed the subject. I didn’t have the language for the way I really felt back then.

Fast forward to when I turned 14, I would watch The Road To Stardom With Missy Elliott every week on MTV to admire the then 23-year-old singer Jessica Betts. She was a masculine presenting lesbian with an incredible voice, and I was obsessed with the way she always dressed in a white vest, baggy jeans, or a white long-sleeved top with dungarees and Timberland boots, topped off with a cap that was always slanted to the side. I also loved the way she talked and low-key flirted with the other contestants. This was the first time I ever saw a Black woman on TV act this way. Through her singing I heard her struggle and her joy, and I recognised that struggle and joy in my own life. I felt seen after so long struggling with trying to understand who I was.

At Christmas I wanted the action man figures my brothers were gifted, but instead I got cute dangly earrings. He got cool hair cuts at the barbers, while I had my hair relaxed at the salon. But the joy came from piecing everything together. When I saw Betts win the show in her baggy jeans, I felt a level of acceptance and it made me feel hopeful for the future, that I would be old enough to buy my own clothes and present how I wanted to be.

Like most people in the LGBTQ+ community, I spent a lot of my youth asking Google “What makes you gay/lesbian”, “Is it possible to get married to the same gender?” and even “How to love a man”. Even though I saw Jessica as representation, I didn’t know anyone in real life who was a lesbian, so I kept questioning whether it was something I could be. I felt a sense of embarrassment when I had these thoughts of possibly being a lesbian because everyone I grew up with and loved didn’t accept homosexuality – and outright condemned it.

That was until my school basketball coach brought her girlfriend to our Sunday league matches. She was my coach from the age of 12 to 18 where we trained at Kings Hall Leisure Centre in Hackney. She was like a lot of us – she went to school in Hackney, and also played basketball when she was younger. Our coach was always private when it came to her personal life, but we all had an inkling because of the quiet intimacy she shared with the woman who came to our matches. At the time, I still wasn’t sure if I was a lesbian or not, but at least I had a real life example of what that could look like.

Now, as a 31-year-old single mother living unapologetically as a lesbian, I am proud to share intimate moments with my girlfriends, milestones I’ve reached in those relationships, pictures on dates, and vlogs exploring the lives we’ve shared. This has encouraged me to love who I am even more, and given me the bravery to continue living fearlessly every day.

I always wonder if I am truly welcome, or if I am only invited as a formality.

Outside of the Black queer community I exist in, I don’t see people who look like me given an opportunity to share our stories. Instead I notice that we are often tolerated, given the bare minimum, and used to tick a box. When I attended the Black Lives Matter protests in 2020, I wondered if those who gave speeches about protecting Black women included masculine presenting women like me? I always wonder if I am truly welcome, or if I am only invited as a formality.

Even though I am secure in who I am, I still feel at a disadvantage to my cishet counterparts, especially men and even queer men. As an influencer, I see the opportunities that queer men are afforded in comparison to queer women. I notice that boardroom seats are taken up by white men. LGBTQ+ charity Stonewall reported that 72% of bisexual women and 60% of lesbians experienced anxiety for their safety in the last year, compared with 56% of bisexual men and 53% of gay men. I, too, have felt this anxiety on the school run, wondering how I would be perceived by other parents and how that would affect my daughter.

International Women’s Day is about raising awareness for women’s equality, and that should include LGBTQ+ women, and masculine presenting women, too. Black, female LGBTQ+ voices are constantly left out of mainstream media’s reporting and celebration of International Women’s Day, and that is a huge problem for young girls who are struggling with identity like I did growing up. Representation is crucial, especially in times of celebration so people feel validated and know that they, too, can achieve great things. Wouldn’t it be amazing to write about your idol at school and include voices such as LGBTQ+ activist Lady Phyll, producer Nana Duncan, BBC Radio 1Xtra DJ Remi Burgz, radio DJ Dotty, activist Char Bailey, and author Jackie Kay, who can wholeheartedly identify with? As Dr Ronx said: “You cannot be what you cannot see.”

If there’s one thing that the LGBTQ+ community is good at, it’s celebrating our own even when the world wants to forget about us. And that’s something I’ll always be grateful for. There is so much joy and progression happening for the queer community. We are claiming spaces, creating our own spaces, and initiatives to support our community to make sure our voices are heard. I feel inspired by other queer women every day and I am so proud of us. One of my lifelong dreams is to see Black masculine presenting women celebrated in an unapologetic way on International Women’s Day because every single meaning of the word woman counts.