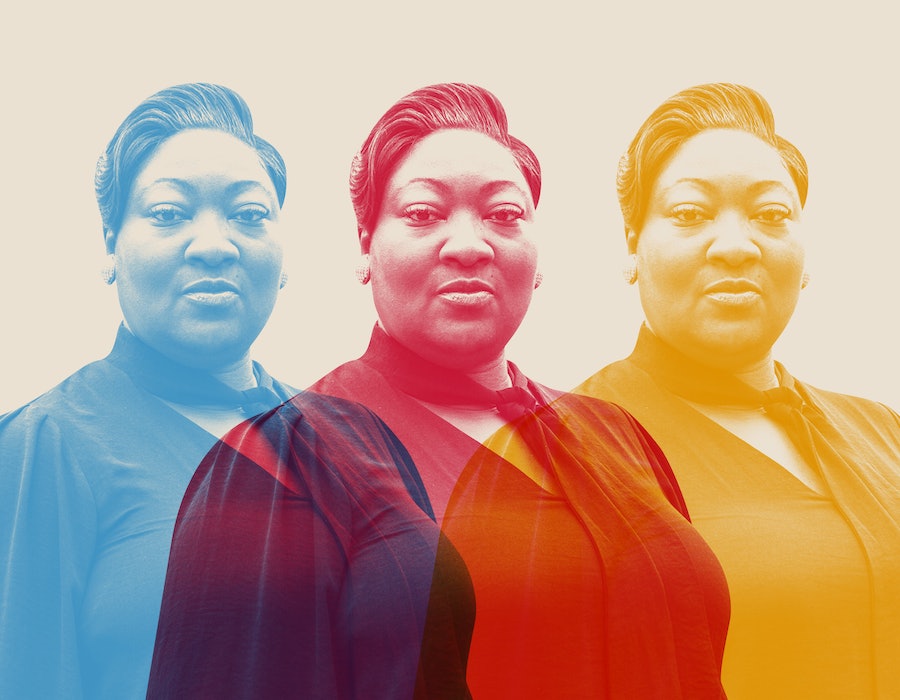 Phyll Opoku-Gyimah doesn’t just talk the talk, she does the work. The British activist is the co-founder of UK Black Pride, executive director of Kaleidoscope Trust – a charity focused on fighting for the rights of LGBTQ+ people across the Commonwealth – she’s a trade unionist, and co-editor of the anthology Sista!. She's won numerous awards for her activism, and turned some down, too. But, more than anything, Opoku-Gyimah leads with love, and plays an integral part in organising for BPOC (Black, People of Colour) LGBTQ+ communities across the UK.

We sit down on a sweltering summer day over Zoom – her small dog in the background, barking occasionally at the washing machine – to talk about the significance of UK Black Pride, community, self-care, and the commercialisation of mainstream Pride events.

Due to the pandemic, things have been a little different for UK Black Pride this year, as events moved online under the theme of ‘love and rage’ – “two emotions coexisting together” for so many, but especially for BPOC communities, says Opoku-Gyimah. Whether it’s anger over the Windrush generation being let down again, or the pain of Black and brown people disproportionately dying due to COVID – rage is understandable, it’s needed. But what binds our communities together, Opoku-Gyimah says is love. “It's the joy that we express with one another, it’s a language that is spoken by so many, in different ways, but it all means the same when you come down to it. Love is love.“

Pride is more than lip service to the cause or just a party; at its core it’s political, it always has been. It’s about community, and fostering safe and celebratory spaces for those in society that need it most. That’s exactly what Opoku-Gyimah set out to do when UK Black Pride launched 16 years ago.

Although her team have cultivated a nourishing space through UK Black Pride, that’s not always the BPOC communities’ first experience of Pride in the UK. Opoku-Gyimah’s first Pride was at London Pride around 18 years ago. “It was white, it was packed, and I was so anxious,” she says. “I was excited to be around so many queer people, but they weren't all my people.” Although there was a sense of shared community, for Opoku-Gyimah, something was missing.

“What I didn't get from my first Pride is a sense of protest, until I met up with other Black and POC queer people.” While Pride events are becoming more political across the board, especially in the last year, for the most part, they remain largely commercial.

After the events of summer 2020 and a global resurgence of the Black Lives Matter movement, “lots of things felt performative,” says Opoku-Gyimah. “It felt like people put up their black squares and then all of a sudden they were really tired, and wanted to quickly move on from it, and go back to posting about their banana bread.” But for UK Black Pride, there was no break – there never has been. “You know that old cliché, ‘we have so far to go’?” she asks. “Other people have so far to go, while we are still dealing with the issues of racism within our LGBTQ+ community, still dealing with the issues of sexism, misogyny and misogynoir.”

Looking through “an intersectional lens” when thinking of Pride events and protests is key, says Opoku-Gyimah. “Some Prides are still very commercial, and it will never really speak to the communities I serve,” she says. She refers to some of the Prides that work with The Home Office, who refused thousands of LGBTQ+ asylum claims, or the Metropolitan Police, “who have constantly disregarded, and disrespected our lives and our bodies, because they’re not creating a safe space for the people who have been marginalised”.

For UK Black Pride, it’s imperative for them to do their due diligence before taking on partnerships. Opoku-Gyimah notes that she’s turned down working with multiple brands who don’t align with their political motivations – “We won't take your money, as much as we need it because resources are a big issue.”

The best Prides are those that evolve in order to truly serve their communities, Opoku-Gyimah says. “Although we are 16 years old, we are still very much in our infancy,” she explains. “How do we make sure we show up and show out for our Black and POC trans siblings, and for our queer non-binary siblings?” she asks. “We’ve got to be able to hold space, and shield them when they need it.”

Continuously fighting for her community and trying to change policy in their favour isn’t easy. “I’m really good at talking about self-care, but I’m not always good at applying self-care,” Opoku-Gyimah tells me. “There are times where I don't sleep, or make sure I prioritise myself, – but I think that self-care is also [the feeling] when I see people get housing, when I've been able to signpost, and knowing that someone's going to be able to eat for the week.”

“I know what my purpose is. I know what I'm here for,” Opoku-Gyimah continues, with confidence. “I always say, I'm guided by my ancestors, and my ancestors would never make me break, because we've gone through so much to even be here.”