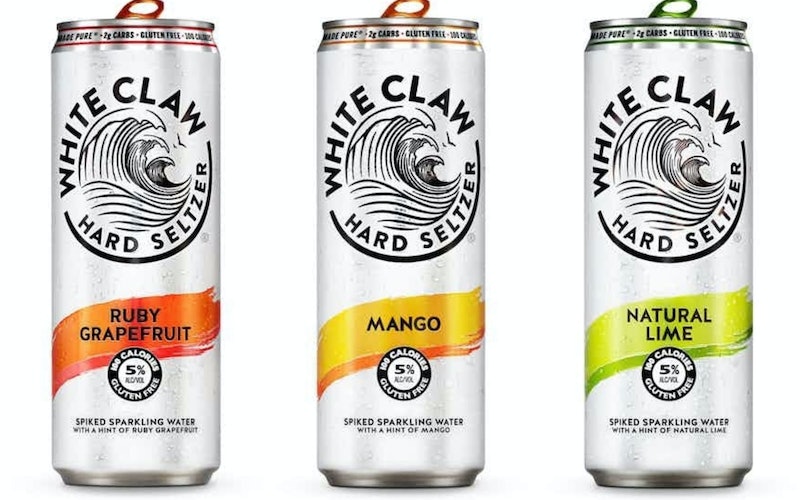 Although there’s no denying the tastiness and appeal of hard seltzers like White Claw, it’s worth remembering that people's claims about their supposed health benefits aren’t all they’re cracked up to be. Take, for instance, the many jokes circulating the internet about how “hydrating” White Claw is. Not to burst your bubble, but it’s, uh… not. This by no means a knock against White Claw itself, or even against hard seltzer more generally — it is, after all, delicious. Just don’t expect it to keep you hydrated as you imbibe; it’s no substitute for plain old water.

Contrary to popular belief, seltzer itself is as hydrating as regular water, according to a study published in the American Journal of Clinical Nutrition in 2015. But hard seltzer isn’t just seltzer. It’s more akin to a two-ingredient cocktail like a vodka soda (although it's often positioned as an alternative to vodka soda) — because that’s what it’s in it: Seltzer and alcohol. As Rebecca Jennings noted over at Vox, “What that alcohol is made out of can differ,” but “usually it’s just fermented cane sugar with added fruit flavors.” Hard seltzer combines those two ingredients — the seltzer and the alcohol — in such a way as to make a resulting beverage that's low in sugar and carbs, as well as lighter on the actual alcohol content than, say, craft beer. (Hard seltzer usually clocks in at around 4% or 5% ABV, while the average craft beer is closer to 6% ABV.)

When it comes to White Claw specifically, the brand notes in its FAQ that it’s “made from a blend of seltzer water, our gluten-free alcohol base, and a hint of fruit flavor.” The precise makeup of a can of White Claw varies by flavor, but for the most part, the primary ingredients in each can are purified carbonated water, alcohol, cane sugar, natural flavor, citric acid, and sodium citrate. The exception is the Pure Hard Seltzer variety, which contains only purified carbonated water, alcohol, and natural flavor.

The alcohol matters. You’re probably already aware of this fact, but alcohol is a diuretic — meaning, it promotes diuresis, or increased urination. That’s why people tend to pee a lot when they drink alcohol. When you pee a lot, you lose fluids — and when you lose too many fluids without replacing them, you become dehydrated.

"Though hard seltzers are made with sparkling water, they still cause dehydration, based on the alcohol being a diuretic," Dr. Scott Braunstein, M.D., medical director of health provider Sollis Health, tells Bustle. "They impact hydration in the same way as other alcohols."

Studies have looked at whether alcoholic drinks are capable of being hydrating — and the results suggest that they can’t, really. A study published in the Journal of Applied Physiology in 1997 looked at whether there was a difference in recovery from dehydration induced by working out in the heat when consuming alcohol-free beverages versus beverages with alcohol. The researchers found that there was no difference in recovery between beverages that were alcohol-free and those which contained up to 2% alcohol; however, drinks containing 4% alcohol were found to “delay the recovery process.” This is why, Braunstein says, you need to drink water in between alcoholic beverages to prevent dehydration.

At the end of the day, go ahead and drink whatever you want; if you, like so many others, have made the switch from beer to White Claw or another variety of hard seltzer, then go forth and enjoy your fizzy goodness. Just make sure you drink some actual water alongside it if you’re hoping to stave off a hangover in the morning.

Murray, Margaret M. (1932) The diuretic action of alcohol and its relation to pituitrin. The Journal of Physiology, https://physoc.onlinelibrary.wiley.com/doi/abs/10.1113/jphysiol.1932.sp002933