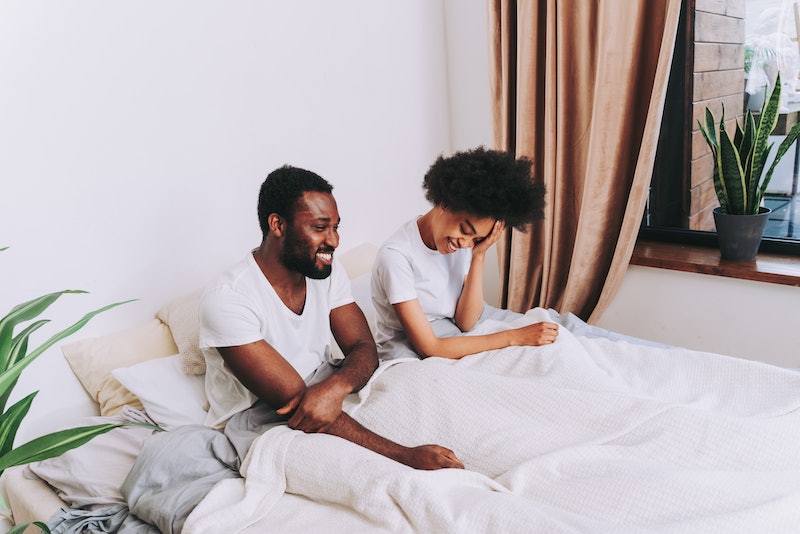 While there’s no set timeline for reaching milestones in adulthood, it’s still valid to feel like you’re “behind” in certain areas of life. Seeing pregnancy announcements of your high school classmates when you’re an adult virgin, for example, can easily (and understandably) make you feel like there’s pressure to catch up with your peers — but it doesn’t have to be that way.

Becoming sexually active isn’t a universal experience that happens for everyone at the same time. Despite this, the media often tries to convince you otherwise by portraying virginity as something most people lose earlier in life — typically in one’s high school years. There's even a movie, The 40-Year-Old Virgin, mocking how supposedly maladjusted and socially inept you must be if you're a virgin as an adult. In actuality, however, 27% of U.S. adults aged 25 to 39 are virgins, according to a 2018 survey by Paramount. So the widespread idea that most people have sex for the first time early on, coupled with the nationwide lack of proper sex education, can make an older virgin feel inadequate or embarrassed — even though they don't need to.

No matter your reasoning for waiting until later in your young adulthood to have sex, being a virgin in your 20s or 30s (and older) is completely fine, and experts say even has some perks that you might not expect. If this is your experience, read on for all the expert advice you need on having sex for the first time as an adult.

According to certified sexologist and sex and relationship coach Janet Morrison, many people tend to delay sexual experiences because of external expectations such as a religious upbringing, wanting to avoid the stigma of being perceived as a “slut,” or lack of education around sex.

Reasons go beyond the lack of opportunity, too. "In high school, I made a promise to myself that I wouldn't have sex before college because I didn't want to deal with having to worry about accidental pregnancy or STIs," Alexandra, a 27-year-old who's waiting until she's in love to have sex, tells Bustle.

Others wanted to make sure they were emotionally mature enough to have a healthy sex life before they developed one. "Being in my mid-20s when it happened, I was more emotionally prepared for that level of intimacy," says Melissa, 43, who waited until she was 24. "Knowing what you are and are not ready for is a sign of maturity and self-awareness — not a weakness."

Kate, 54, felt even more strongly about her decision to wait when she became a mental health counselor. Through her clients, she noticed that "sex ignites passions they’re not quite mature enough for — and not just 'love' but also revenge, lust, jealousy, and hatred," she tells Bustle. "Self-esteem takes a hit, too. 'He said he loved me! Why am I not loveable?'" She ended up having sex for the first time when she was 32 and had the loving partner she wanted.

For some, the right person just hasn't come along yet. Given the popularity of casual hookups on college campuses and among young professionals, a lot of people don't get into serious relationships until their 20s, 30s, or later. And for reasons varying from the preference for emotional connection to the desire to make sex as safe as possible, some want their first time to be with committed partners.

What Happens When You Lose Your Virginity Later In Life?

Even if it’s not a conscious decision, being an adult virgin can still have its upsides. Sharing that first intimate connection with one partner can be a special bond, even if you choose to do so for reasons other than religion, says certified sexologist and sex therapist Dr. Gloria Brame. “There are those who really wish to be able to say their husband or wife was their first because it makes them feel proud,” she tells Bustle.

There are also biological aspects that can make your first sexual experience as an adult even better, says Morrison. “Your body/brain response will be more mature — the frontal lobe of the brain, which helps us make decisions, is not fully formed until the mid-20s,” she explains. So early sexual interactions have a higher chance of being physically driven rather than mentally, says Morrison, lessening the chances that young people will experience pleasure or make decisions based on safety and consent. Having this maturity and biological understanding as an adult can help you have a better grasp on what might make you feel good and comfortable when you’re becoming sexually active.

Still, having sex for the first time later on in life could potentially come with its own challenges. According to Brame, there’s a chance you and your partner end up could deal with sexual incompatibility or conflict surrounding your sex life. “I've worked with people who married as virgins, only to discover deep sexual incompatibilities or lack of understanding of how good sex works,” she tells Bustle. “They assume that once they get married, it will all work itself out. Instead, they may find themselves struggling with an unfulfilling sex life — or much worse, constant fights over sex.”

What To Know Before Having Sex For The First Time

When you’re ready, talking to your partner about being a virgin in your 20s or 30s (or older) can be intimidating. While there’s no real need to feel shame or embarrassment about your decision, it’s OK to have those feelings come up. Your sex life is personal and unique to you — but being open and communicative is the key to starting the conversation, says Morrison.

“Most people will avoid talking about difficult things for fear of judgment and that the other person will then not want to be with them,” she tells Bustle. “My recommendation is to speak your truth up front. If the other person judges you, makes you feel uncomfortable, or is unwilling to participate, they are not what you wanted anyway.” You could write down talking points and practice before chatting it through with your partner, too.

According to Marissa Nelson, licensed marriage and family therapist and AASECT-certified sex therapist, it’s all about making yourself feel confident. “Being able to embrace your own sensuality, make love to yourself, and know how to please yourself long before you make love to someone else for the first time paves the way to incredible intimacy with another person, where you can experience safety, comfort, and the ability to let go and give into pleasure."

This article was originally published on Feb. 27, 2018