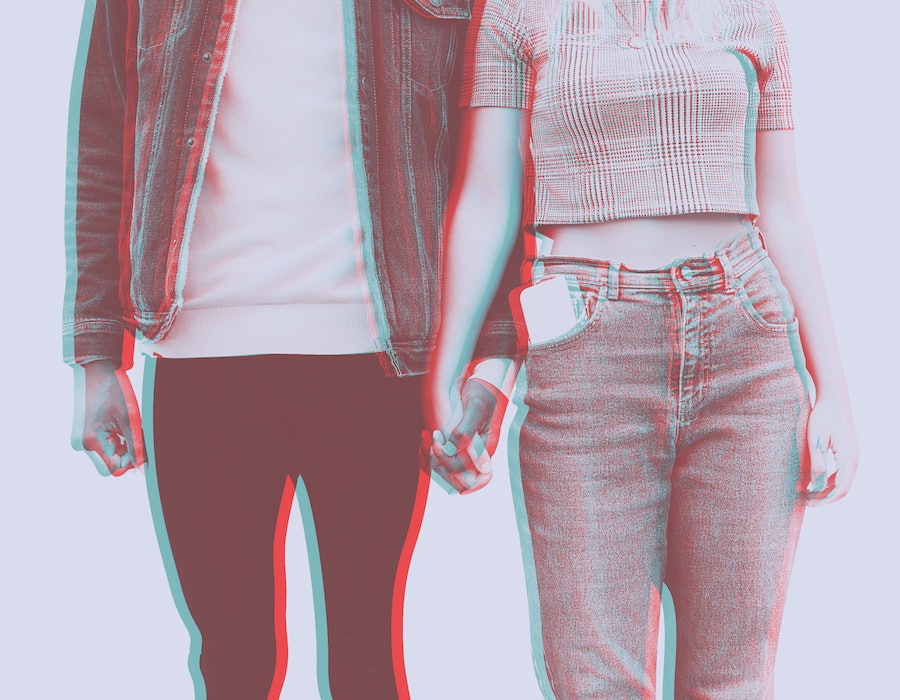 Ruta, 19, isn’t into casual dating — she wants a committed partner to go on date nights and learn choreographed dances with. But Ruta's desire for a serious relationship isn’t rooted in love. She wants a partner she can post about to her 538 TikTok followers.

“Content with couples performs better,” she tells Bustle. “Someone posting about you is an extension of your desirability.”

For many millennials, the years leading into, during, and just after college were defined by high-low skirts and hookup culture. But studies show that casual sex was actually more prominent in movies and TV than in real life — with Lisa Wade, a sociology professor and author of American Hookup: The New Culture of Sex on Campus reporting that in 2017, 30% of the University of Chicago’s graduating senior class of approximately 3,500 students claimed to have never “hooked up” or participated in casual sex during college.

But in 2021, the “expectation versus reality” discrepancy seems to look different for Gen Z, who are entering what was once known as prime hookup time. “Having a significant other on social media shows people that someone wants you,” Ruta says. “You’re taken; you've finally gotten into a relationship.”

And with new relationship milestones, extravagant anniversary vlogs, and #couple Q&As, dating experts and younger people say Gen Z is trading in casual hookups for serious commitment — all because it looks better online.

If you lived through the era of "Facebook Official" relationships, feeling pressure to post about your love life might feel like nothing new. But TikTok dating coach and relationship expert Alexis Germany tells Bustle that the rise of video-sharing social media and influencers have made #couplesgoals stakes higher than ever. TikTok influencer couples like Alex Warren and Kouvr Annon, Sienna Gomez and Jack Wright, or Chella Man and MaryV Benoit are taking over the "For You" page with viral couple pranks, trends, and challenges.

"Video content seems real, even though it's contrived," Germany says. "In our minds, influencers are 'just like us.’ Younger people want to emulate that, to try to show off their lives, too."

In 2012, an update on your timeline may have garnered a lot of "likes" from your actual friends, but Germany says that's not this generation's goal. Gen Z posts in the hopes of going viral among strangers. Take Katherine, 20, who broke up with a recent partner because he didn’t want to start a couples TikTok account with her.

“A relationship is something I want to share with the world,” Katherine tells Bustle. “Social media is how I tell my story and if we’re dating, you’re a part of that story.” Katherine says that when her ex was hesitant to film couples content, she felt rejected. “It felt like he was not supportive of my creative endeavors and how I choose to express myself,” she says, “Or like he was embarrassed or ashamed to be seen with me publicly.”

Unlike changing your relationship status or uploading a static photo, Katherine says that Gen Z is expected to continuously produce enticing, romantic video content across multiple platforms, including Instagram stories and TikTok.

Shane, 22, is an aspiring influencer who believes that a viral couples Instagram account is a realistic way to gain a following. “Everyone in my generation, in some way or another, wants to go viral,” Shane tells Bustle. “We’re living in the attention economy and everyone wants to get rich.” Although he’s currently single, Shane says that the potential to create viral content plays a role in who and how he dates. “It’s a dark thought, but it’s the world I’ve built for myself,” he says.

But Shane isn’t alone — with TikTok bringing back promise rings and popularizing "girlfriend proposals," experts say the only way to play ball on TikTok is to do so with a partner.

"These new relationship milestones are content opportunities; they're created with going viral in mind," Germany says. "Younger people see famous social media couple capitalizing off their coupledom and want to mimic that. They want to be in these super serious relationships but use them to get clout."

But after a TikTok goes viral or a post gets more likes than usual, users may feel even more pressure to keep sharing the relationship. "Once you start, you keep creating content, and people associate you with being in this couple," Germany says. "They become invested in learning more about you — even on a small scale."

For You Page FOMO

While Naomi, 22, views featuring a new partner on your account as a big deal, she says that the real significance comes from publishing content over time. “I actually feel more pressure now than I did at the start of the relationship,” Naomi tells Bustle. “More of a ‘See? It’s still going well, we’re still in the honeymoon phase, we never fight, everything’s perfect,’ sort of way.”

Naomi and her partner just celebrated their one-year anniversary with a beach picnic. Although she was excited to spend the day together, she caught herself being concerned with how the date would look online than how it actually went in real life.

“I envisioned a perfect dreamy intimate Instagram moment with a charcuterie board, cake, rosé, the works,” Naomi says. “The beach he chose was nice, but not what I had pictured in my head. I felt so disappointed that the aesthetics didn’t match my expectations. I was so focused on the performative aspect that I almost forgot what the occasion actually was.”

Naomi says that sharing her love life on social media feels like pressure to curate the image of a “perfect” serious relationship. “Social media has set this weird standard of perfection for how we expect relationships to function,” Noami says. "I’ve had plenty of short-lived relationships that I didn’t post about because I knew the relationship wouldn’t last.”

Jamie Lee, 21, and Margaux Weiner, 21, the founder and head of marketing of social dating app Flox, tell Bustle that curated internet couples have stunted their generation’s understanding of how real-life romantic relationships work. "We’ve lost our ability to understand what a relationship really means because we just see this image of one," Lee says.

This fixation on how a relationship looks to others online is something Germany often discusses with her younger clients. "People are starting to look for their perfect Instagram partner," she says. “You don't think you've had a good time until other people like it.”

Germany urges her clients to investigate why social media means so much to them. “It’s OK to want to post and share, but what’s going on behind it?” Germany says. “Are you using your outside image to make yourself feel better about the problems within? That’s giving Instagram a lot of power.”

Naomi agrees that a social media presence has become overvalued in relationships. Her concern, she says, is that for her generation, online love is becoming more important than love itself. “There are moments we pass up, force, or don’t actually enjoy because we chase aesthetics,” she says. “We view dating through Instagram goggles.”