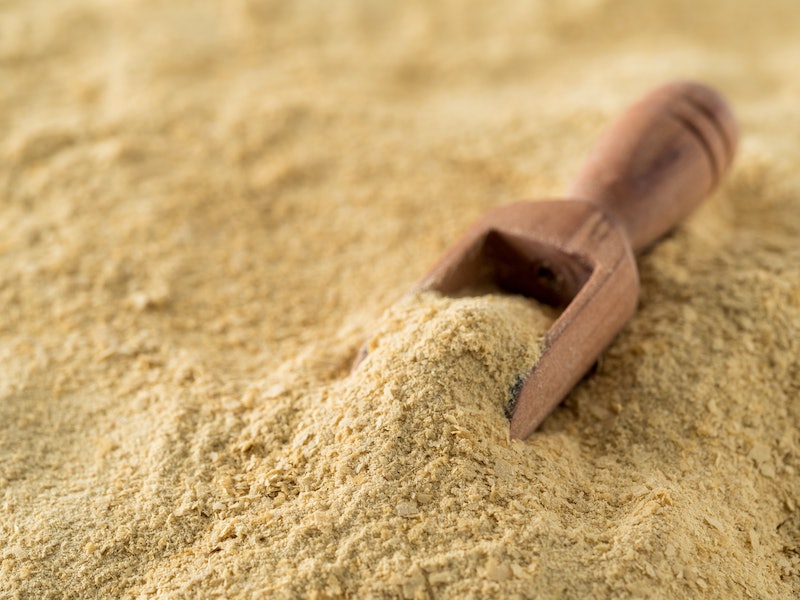 If you’re on a vegan diet or are just trying to cut down your dairy intake, you’ve probably purchased nutritional yeast from the health food aisle of the grocery store before since it's known for its cheesy flavoring. If you can’t get behind its flaky texture or are looking for similar options to cook with, there are plenty of nutritional yeast substitutes.

Having more knowledge about nutritional yeast can help you make an informed decision when you're picking a replacement. According to Beth Warren, M.S., R.D., founder of Beth Warren Nutrition and author of Secrets of a Kosher Girl, this dairy-free yeast provides a rich source of protein. “It'll give you 10 grams of protein in only two tablespoons,” she says. Even better? It’s also packed with B vitamins, including B12 and folate. Unlike baker’s yeast, nutritional yeast is inactive and has a cheesy, nutty flavor.

Since nutritional yeast already sets the bar so high with its rich vitamin and mineral content, most replacements won’t be able to compete on the health scale. However, each of them will bring its own benefits to the table. Marisa Moore, registered dietitian nutritionist, tells Bustle that if you typically look to nutritional yeast for your B12 intake, "you can't expect to get the same amount of B12 from substitutes."

That said, Warren notes that most alternatives will still have the same umami, salty flavor despite any differences in texture, as well as provide a good source of protein. Whether your kitchen is plant-based or not, here’s a list of expert-approved nutritional yeast substitutes to experiment with.

This substitute is definitely the most closely related to nutritional yeast. Involved in alcohol brewing, brewer’s yeast is also very high in B vitamins and protein, Warren says. As for its taste, it has a similar flavor to nutritional yeast, but it’s even nuttier and more bitter.

“You could use it in something like a smoothie if you want to get a boost of vitamins and get that kind of deeper, umami flavor,” Warren suggests.

If your favorite appetizer is miso soup, you’re in luck with this one. Similar to the salt and umami flavor of nutritional yeast, miso paste is also rich in probiotics and protein, says Warren. Since miso is fermented soy, the fermentation process gives it that salty flavor common in nutritional yeast.

Contrary to what you might think, yeast extract — like Vegemite and Marmite — can actually be quite tasty. Just ask your Australian friends. Made of leftover brewer’s yeast, spreads like Vegemite consist of a paste-like texture with that same delectable savory, salty combination of nutritional yeast — though it doesn't have much protein compared to other substitutes.

When it comes to any ingredient that goes through the fermentation process, be extra aware if you have high blood pressure or are on a low-sodium diet since they tend to contain high sodium levels. According to Warren, these ingredients are typically high in sodium since that process extracts lactic acid, which is a food preservative. By the same token, fermentation also contributes to a rich flavor and probiotic benefits — so it’s all about balance.

When it comes to nutritional yeast substitutes, sometimes you have to get creative: which means not all replacements will be one ingredient. Chickpea flour alone won't taste like nutritional yeast, but Moore says pairing it with different spices — like onion and garlic powders — can create something more comparable. (Pro tip: This particular mix tastes great when sprinkled over popcorn.) Plus, chickpea flour is high in protein.

Her tip? Don't be afraid to blend unique combos of ingredients to create the perfect umami flavor and flaky consistency of nutritional yeast.

Once chopped and ground up, dried mushrooms can provide you with a more powdery, grainy texture comparable to nutritional yeast. The substitute gives that same umami flavor profile while also providing key vitamins and minerals like B vitamins, antioxidants, and potassium, plus some protein.

Moore says mushroom powders (rather than full mushrooms) work best as a nutritional yeast substitute, but these can be hard to find at the grocery store. Buying dried up mushrooms and grinding them up yourself will do the trick.

If you're not avoiding dairy, parmesan cheese is the ideal substitute for nutritional yeast since it captures the cheese flavor, says Moore. Parmesan is one of the most protein-rich cheeses you can get, which also makes it more comparable to the yeast.

"If you're making popcorn and you want to add a cheesy flavor, you could definitely use parmesan cheese, [which is] going to have that dry consistency," she says. You could also sprinkle it over a salad or on vegetables, much like you would with nutritional yeast.