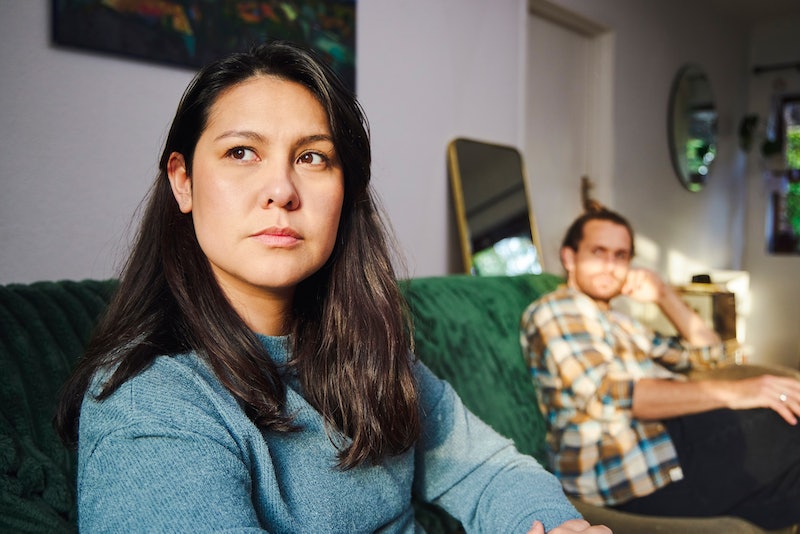 Have you ever dated someone who felt like they were untouchable? Like none of the rules of society ever applied to them, and in turn, to your relationship? If this applies to your past (or present) situation, odds are you’ve been with someone who has what the colloquial internet and experts alike are calling a “god complex.”

While dating someone with a god complex can pose a challenge, the first thing you should know is that — like everything related to mental health — having a god complex exists on a spectrum.

Some people might have a god complex while also functioning with full-blown narcissistic personality disorder, while others might simply have some unfavorable, selfish traits that they need to work out within the confines of a supportive relationship. (And don’t we all?)

Whatever your situation, here’s how to know if your partner has a god complex, where it comes from, and what to do about it, per experts.

What Is A God Complex?

While it isn’t technically a condition that’s defined by the Diagnostic and Statistical Manual of Mental Disorders 5-TR (the leading scientific literature on psychiatric information), having a god complex means that someone has a sense of grandiosity and a belief that they are inherently better than others, explains Jaime Zuckerman, Ph.D., a licensed clinical psychologist and narcissistic abuse coach.

“The rules of societal norms don't apply — unless it benefits them in any particular way,” Zuckerman says. People with a god complex also require a lot of attention and admiration that will boost their egos. “They need to know how important they are, how successful they are,” Zuckerman says. They’re untouchable, and they will challenge anyone who questions that “perfect” image so they feel in control.

Warning Signs Of A God Complex & How To Identify It

The following are common patterns associated with god complexes in the context of romantic relationships and how to spot them in your partner.

1. You won’t notice it in the beginning of the relationship

For starters, it’s unlikely that you’d notice your partner has a god complex early on in the relationship. If anything, they’d be the exact opposite: “They're very charming, charismatic, and attentive. They’re doting on you, wining and dining you,” Zuckerman explains.

The relationship will initially be a “whirlwind romance,” Zuckerman says. Early on, they’ll say premature phrases like “you’re my soulmate” or “where have you been all my life?” This language will be intoxicating, fast, and intense to the point that it sucks you in. “It's very easy to get caught up in that,” Zuckerman says. “They make you feel like you’ve belonged together your whole life and now you've found each other. That's commonly called love bombing,” she explains.

3. But soon, the facade will shatter

After the partner with a god complex wins you over, you'll slowly start to see that effort chip away and not exist anymore, Zuckerman says. Winning you over is a part of their ego boost. “Now that they have you, they might start controlling your emotions,” likely through gaslighting, she explains. The goal? That you see their reality as superior and “right” over your own.

Since the only reality they live in is their own, they’re never wrong, explains Jenni Skyler, Ph.D., director of The Intimacy Institute. “You can spot it when they're unable to take personal responsibility or accountability for their behaviors or words,” Skyler says. This means a person with a god complex might lack empathy or compassion when you need it most.

All that said, while these are signs that a person might have a god complex, you should remember that these behaviors exist on a spectrum, Skyler says. This means your partner might possess a varying level of any of these qualities — and they might not be as severe as described at all times.

What Causes A God Complex?

Usually, it’s a result of a toxic childhood upbringing, like “being told they're chronically unworthy by school, society, or family members. This is how the armor develops,” Skyler says. Maybe there was emotional abuse, addiction in the family, or they lived in an unstable home environment.

“You never knew what you were going to get, and so as a kid you develop this ‘nothing can hurt me, no one can hurt me’ attitude. That carries into adulthood, and without awareness, it creates that complex,” Zuckerman explains. And because they’ve worked to cultivate this facade as ego protection, at its most severe, they will rage against attempts to penetrate the image.

Alternatively, it’s helpful to note that a god complex doesn’t need to come from negative childhood experiences. It can also be a result of the “golden child” upbringing, where the child could do no wrong and “the rules didn't apply,” Skyler says.

In this situation, parents might have had high expectations for the child, told them they’re the best at everything they do, ensured they never got in trouble, and put the child on a pedestal. This mindset carries into adulthood, and the person now has no awareness, concern, or interest in changing. “There’s no need, because they don't do anything wrong … It's everybody else,” Skyler says. This kind of thinking can ultimately make for challenges when in an intimate relationship.

Before you move on, let’s get a few things straight. Sometimes the terms “narcissism” and “superiority complex” are conflated with what it means to have a god complex — though they’re definitely not all the same. (Albeit similar.)

Someone with a god complex might have narcissistic traits, but that doesn’t necessarily mean they’re a narcissist (commonly referred to as narcissistic personality disorder by the DSM), Zuckerman says.

Again, think of this like a continuum: Clinical narcissism is more severe. The inflated sense of self, the ego, and the braggadociousness might all sound similar to the behaviors of someone with a god complex, though they’re not really the same.

Narcissistic personality disorder is more intense, and it permeates all areas of a person’s life — not just a relationship or job — and they will literally hurt anyone who punctures that bubble of inflated self-importance.

Someone with a god complex is less likely to cause physical harm. “They may just get irritated, angry, or annoyed,” Zuckerman says.

“A superiority complex is less psychiatric in nature,” Zuckerman says. It has more to do with someone having a large ego than a god complex. (Which oftentimes means that a person’s ego is actually quite small.)

“Superiority complex means you think you're superior to others and therefore others are inferior to you,” Zuckerman says. “With a god complex or a narcissist, they deep down don't feel superior at all. If anything, they feel completely inferior to other people,” she explains.

In addition to this, “people with a god complex or narcissistic personality have a huge thing of lack of empathy. Those with superiority might think they're better than you, but that doesn't necessarily mean they lack empathy,” Skyler notes.

How To Deal With A Partner Who Has A God Complex

As mentioned, there is a spectrum to god complexes, and just because your partner might have one doesn’t necessarily mean you need to leave the relationship — it depends how intense and present the god complex is in their life.

“If you're dealing with a god complex-haver who is really full of themselves, but they have the awareness that sometimes they're just being an asshole, you can work with that and set boundaries,” Skyler says.

For example: In the moment that god complex isn't elevated or active, you can say something like, “I love when you're gentle and you can listen to me. I love when there's compassion and we can both have space to voice our opinion without one person having to be wrong,” Skyler says.

Using softer language like, “I really love these kinds of comments. Can we work on cultivating more of them?” will work better than verbalizing accusatory language, like “you have a god complex,” Skyler says. (Doing the latter may just make the situation worse.)

As long as they’re not acting flat out abusive toward you (in which case, you definitely need to leave), try to have compassion for them and their childhood wounds in the moment rather than getting defensive. Wait until it passes and then have a conversation.

“But if you're with a person where it never passes, that's the deal breaker,” Skyler says. And while it might be tough to end things — breakups are legit never easy — trust that getting out of the partnership is for the best.

More like this
Is It A Rebound Relationship Or The Real Thing?
By Carolyn Steber and Lexi Inks
Are Quality Time & Physical Touch Love Languages Compatible?
By Lexi Inks
12 Ways You're Sabotaging Your Love Life
By Teresa Newsome and Lexi Inks
Why A Relationship Timeline Isn't Necessary For Everyone
By Lexi Inks
Get Even More From Bustle — Sign Up For The Newsletter