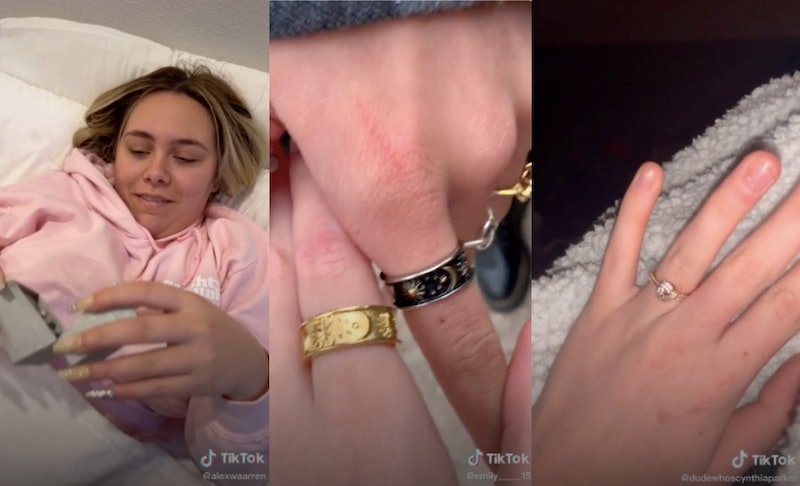 After three years of dating, Sophia's boyfriend decided to put a ring on it — well, a promise ring. Although he's headed off to college in the fall, Sophia still has another year of high school. The ring was her 18th birthday present.

"When he handed it to me, he said, 'To be clear, this isn't an engagement ring,'" Sophia tells Bustle. "It was about showing his commitment to the future of our relationship."

Next to the revival of velour tracksuits, promise rings reentering the cultural zeitgeist is a major Uno reverse card. Christmas 2020, "Showing Off Our Promise Rings" become a viral trend on TikTok, with users influencer couples like Cynthia Parker, 15, and Quinton Griggs, 16, and Alex Warren, 20, and Kouvr Annon, 20, showing off their beloved bling.

Leila Elizabeth, jewelry designer and founder of sustainable jewelry brand Lilac Tree, first noticed an uptick in promise ring commissions in May. "Sales continued steadily throughout the year and increased quite a bit just before Christmas," Elizabeth tells Bustle. "They’ve become one of my best sellers!"

According to Elizabeth, while typical "engagement rings" may use high carat gold or platinum and precious gems, promise rings are often made from more affordable materials like sterling silver, nine-carat gold, and semi-precious stones. "They are affordable enough to be considered promise rings, but meaningful for the customer as well," Elizabeth says.

For '90s babies, the phrase "promise ring" likely conjures memories of Jesus Camp and Disney Channel stars like the Jonas Brothers doubling down on their family-friendly image. But for couples in 2021, promise rings are more about longevity than their vow of virginity. The rings symbolize stability, signaling a cultural move away from hookup culture and toward committed partnership.

In the early 2000s, megastars like Britney Spears, Miley Cyrus, Jordin Sparks, Selena Gomez, and of course, all three Jonas Brothers popularized wearing promise rings while promoting religious abstinence in interviews and public appearances. But the rings didn't just emblemize chastity — they were also a sign of moral hierarchy. Promise rings of the aughts were a binary between the pure and the prurient.

In 2001, Jessica Simpson told Blender magazine, "I’m so lucky I didn’t lose my virginity in the back of a Jeep or something." And at the 2008 VMAs, Sparks stated that she wore a promise ring because "not everybody wants to be a slut," while presenting an award. So, what's the connection between a piece of jewelry and slut-shaming?

A quick look at the state of sex education in America shines some light on the celebrity chastity trend. In 1996, President Clinton's Personal Responsibility and Work Opportunity Reconciliation Act (PRWORA) mandated that Congress give $50 million a year to fund abstinence education programs. According to a 1999 study from the Guttmacher Institute, 86% of school districts required abstinence promotion in their sex ed classes, with 35% requiring abstinence be taught as the only option for safe sex. During the Bush administration, Congress created the Community-Based Abstinence Education Program (CBAE), which gave federal funding to several abstinence programs around the country, including Silver Ring Thing (now know as Unaltered), a virginity pledge program where teens are given chastity rings after pledging to "save themselves" for marriage. Abstinence was so widely promoted in schools and by the federal government that it permeated pop culture.

But under the Obama administration, the culture of sex education in America evolved. In 2010, President Obama largely eliminated abstinence-only sex ed funding. Around this time, conversations around ending slut-shaming and sex-positivity became normalized in systemic settings. This shift was felt in Hollywood, with the latest bout of former-Disney-darlings-turned-megastars (think Zendaya, Bella Thorne, and Rowan Blanchard) talking more openly and progressively about having casual sex and women supporting women.

Similarly, Sophia says that her ring was a symbol of her boyfriend's affection before moving out of state. "He was running out of types of jewelry to give me," she says.

Why Are Promise Rings Making A Comeback?

Although promise rings may seem like an unlikely 2021 trend, TikTok dating coach and relationship expert Alexis Germany says that the rings' growing popularity can be attributed to social media.

"Promise rings are a response to how public relationships are right now, even if the couples aren't famous," Germany tells Bustle. "A lot of it is aesthetics, what other people think, and what other people see."

The pressure to display your relationship on social media, whether that means posting photos on Instagram or videos on TikTok, has reinvented relationship milestones by adding pressure for visual manifestations of love, like promise rings.

"People want the aesthetic of being a happy couple, and having a promise ring makes it more engaging to their audience," Germany says. "And it causes a strange sense of envy in the people that don't have one."

Because promise rings may help fortify a couple's "brand," Germany says exchanging them makes for more content opportunities. "The same person who makes a promise ring video may later post a breakup video, Germany says. "You thought they were in this serious relationship, but that doesn't mean they are."

But the young couples who choose to exchange promise rings offline signal a larger cultural shift toward displaying affection and long-term commitment. Still, Germany urges people to communicate clearly and reflect on what they truly want: A promise ring? A deeper connection to their partner? Or, perhaps, a lot of likes on an Instagram post.

More like this
30 Clever Ways To Slide Into Your Crush's DMs
By Griffin Wynne, Carolyn Steber and Lexi Inks
Hinge Added A Video Prompt Feature, So Get Your Camera Rolling
By Hannah Orenstein
Are Quality Time & Gift-Receiving Love Languages Compatible?
By Lexi Inks
The Differences Between Polyamory & Open Relationships
By Lexi Inks
Get Even More From Bustle — Sign Up For The Newsletter