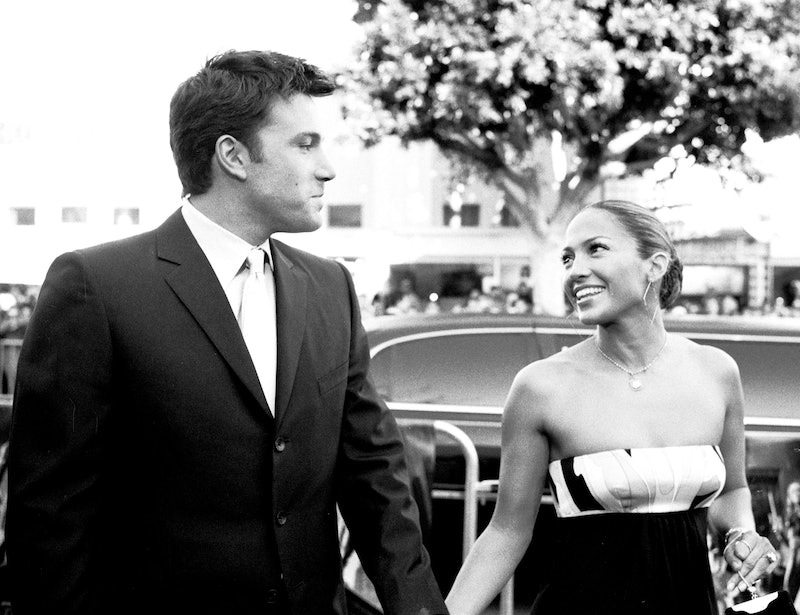 Imagining a romantic reunion with your first love is a heady drug. And if Jennifer Lopez and Ben Affleck’s recent rekindling is any indicator, it’s certainly possible. Earlier this week, when asked about the coupledom in an interview with Hoda Kotb, Lopez side-stepped the question, saying instead, “The message of healing and love is more prevalent than ever.” (And OK, he wasn’t technically her first love — she was married when they met — but she has called him her first real heartbreak.) A 2019 study in the journal Social Psychological and Personality Science found that we’re more likely to think positively about exes when we’re single or haven’t fully accepted a breakup, which could account in part for their reunion.

“Often when we’re taking stock of previous relationships, we can somehow remove ourselves from the emotions at the time of the breakup,” says Sarah Louise Ryan, a UK-based dating and relationships expert. “We can find ourselves romanticizing them.”

That doesn’t mean reconsidering your first love is a doomed mission. Sometimes it does work out, she says. “There’s no right or wrong in revisiting relationships that have passed and seeing if there’s a strong enough foundation for it to flourish again,” she says. “However, it’s very rare that people get back together and [the relationship] has the legs to run the distance.”

We’ll keep our fingers crossed for J.Lo and Ben, and maybe for you and your first love, too. Here, experts outline 12 signs that your relationship could overcome the odds.

1. You Both Still Have Feelings For Each Other

It may sound obvious, but if you're ready to rekindle the flame, and your former flame is not, your storybook ending will not go as planned. The first step is to figure out if they’re pining as well. If so, figure out where to go from there.

2. You Can Openly Communicate About Things

This is important for any relationship, but especially so for those restarting after years apart. If you can keep an open and honest dialogue, you’ll be able to share how you're feeling, navigate new experiences together, and get over humps that you couldn't overcome the first time.

“[If] there was a reason two people weren’t able to communicate well enough,[have they] done work on themselves? Are they willing to do that work together?” Ryan asks. “If that’s the case, and communication is looking good this time around, you might be ready to explore rekindling.”

3. You Think About Them When You're With Someone Else

This is major. If you've moved on with your life and dated other people, but your first love is still on your mind, it’s worth asking why — especially if things are going well with a different partner. It's easy to default to the past when we're unhappy with the present. A 2013 study in Social Psychological and Personality Science found that as relationships decline, longing for ex-partners increases. So if the past is lingering even when you’re happy, you might not have fully moved on.

4. You've Kept In Touch After All This Time

If you’ve managed to stay connected with your first love after 5, 10, 20, or 30 years, you clearly have a strong connection. Who’s to say that connection couldn’t turn romantic again?

It might feel risky to put a friendship in jeopardy, but if you have a solid foundation of communication and respect, talking about something like a past (and potentially future) romantic relationship should be possible. Just keep in mind that there’s never a guarantee it will work. “With any new relationship, communication is key, and with rekindling an old one, it’s very vital,” says MoAndra Johnson, a therapist who specializes in relationship conflict.

5. Your Connection Has Grown Along With You

First loves, by their very nature, often happen when we’re relatively new to the dating game. “In our 20s, we’re learning about who we are, how we show up in the world, and who we want to welcome into our lives,” Ryan says. “We do a lot of growing that whole decade. If you met someone in those juvenile years, when you perhaps felt like you didn’t know yourself well or were still finding your footing, there’s every chance that the two of you have found your footing [since then] and can reconnect romantically.”

6. You Broke Up For Situational Reasons

If you and your ex ended primarily because of circumstances — like if you went to different colleges, or their family moved away — and not due to incompatibility, maybe you have a shot worth shooting. But recognize that you can’t build a relationship entirely based on the past. “Your first love, depending on how long ago you broke up, might have evolved completely differently than you,” Johnson says. “Let’s say you relocated for school. Maybe the partner you relocated from could’ve experienced some trauma from that move. It’s all about where you are now in life.”

7. Being With Them Still Feels Natural

Even though it's been a few years, your connection and chemistry feel like you're picking up from where you left off. If that’s the case, and you have fun with each other, feel comfortable around each other, and are able to communicate openly, you’ve found the real deal — again. Relationships always require work, but if you’re doing that work with someone who just seems right to you, then chances are they are.

8. You Have A Gut Feeling

“Intuition doesn’t get enough air time,” Ryan says. “The more you get to know yourself, you tune into your gut, and it’s almost kinetic in your body when something is right or not.” So if you have a good feeling about being around your first love, that’s your body’s answer. But the reverse is also true. No matter how well you can rationalize a rekindling in your head, if your stomach drops when you’re around them, don’t ignore that sign. “In our gut, we’re often not wrong about how we feel. If you’re feeling attracted to a person but it doesn’t feel quite right, trust it,” Ryan says.

9. You Compare Your Current Dates To Each Other

You may always remember how your first love would kiss or the way they said your name. Though everyone has fond memories, if you and your first love find yourselves constantly measuring your current partner or dates to each other, it could mean you’re not over the relationship. As Dr. Danielle Forshee, doctor of psychology and licensed social worker, tells Bustle, if you notice yourself "outwardly comparing dates to your ex or if you suggest that new dates engage in certain behaviors, habits, or rituals that your ex engaged in” you likely still have feelings for your first love. Whether you always think about how they would have handled a situation, or find yourself encouraging your partner to be more like your ex, it may mean you’re meant to be with your first love.

10. You Call Each Other When You’re Upset

Your first love might have known the perfect things to say when your family drama was spiraling out of control or gave the best back rubs after a long day at work. Yet, if you still find comfort in each other in times of stress or conflict, you may still be holding onto feelings.

“The telltale sign that someone is still attached to their ex is how readily their ex enters their mind when they are anxious or upset,” Samantha Joel, relationships researcher, tells Bustle.

So if you and your first love text each other when your boss is on a tear or your roommate trashes the living room, it could mean your connection isn’t over.

11. You Had An Incredible Sex Life

Still thinking about your sexual chemistry all these years later? As Jaime Bronstein, LCSW, a psychotherapist and licensed clinical social worker who specializes in relationships, previously told Bustle, a great sex life with a past love is worth considering. "When you feel so drawn to someone sexually and you also have the internal attraction factor and you have never felt more sexually compatible with someone," she said, it’s something to assess when you’re trying to figure out if you’re meant to be.

12. You Both Have Kept Old Pictures Or Sentimental Things

Cue the scene in Friends where Rachel pulls out the box of things she’s kept from Ross, like an eggshell, a movie ticket, and of course, the ‘Frankie Says Relax’ shirt. Raffi Bilek, LCSW-C, director of Baltimore Therapy Center, says that if you and your first love keep old couples' photos, concert tickets, or other sentimental things around, it could mean you’re still in love with each other. "It might be in your wallet, on your desk, or somewhere more hidden than that, but it's something you’ll refuse to get rid of,” Bilek tells Bustle.