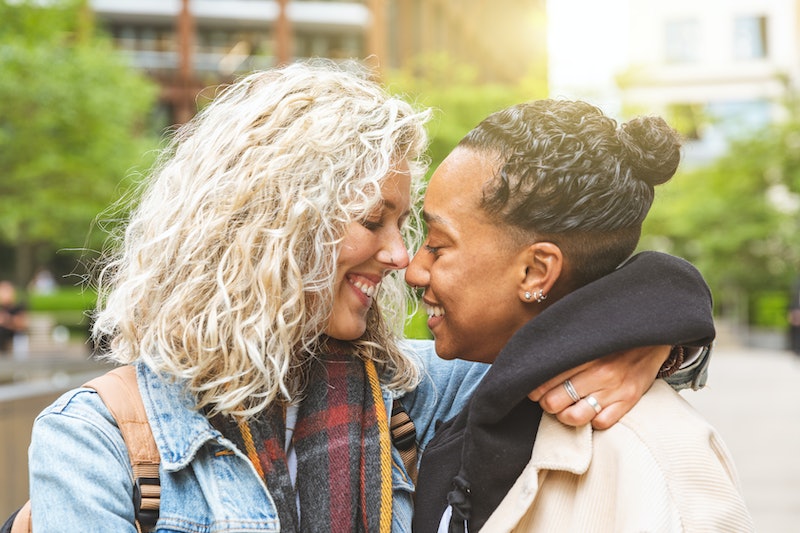 Sometimes, after ending a relationship, you're left wondering if you made the right choice or if you did, in fact, push away someone great. It's one of the many reasons why breaking up can be so hard to do. But the good news is there are plenty of ways to know if your ex is your soulmate.

Before I dive in, it's important to remember some exes are exes for a reason. Perhaps they cheated on you, had mismatched core values, were toxic to be around — and as a result, really did need to go. In these cases, it's best to find a way to move on and let go of the idealized version of the relationship you have in your head, and accept you're much better off without them. Not to mention, there is no "one perfect soulmate" for everyone, and if you give yourself enough time, you will be able to create a similar connection with someone new.

That said, if your relationship ended for a silly reason, or you can't stop thinking about what could have been, it really may be worth it to reach out to your ex. "You never want to look back and wish that you would have done something," Jaime Bronstein, LCSW, a psychotherapist and licensed clinical social worker who specializes in relationships, tells Bustle. "Gather the courage to use your voice [...] and just let them know how you feel."

Of course, you won't want to reach out if they've started a new relationship, or if they've said they aren't interested in getting back together. But it won't hurt to say hi and catch up. "Regardless of the outcome," Bronstein says, "you will feel empowered knowing that you honored your heart."

If you’ve broken up with someone who you believe might be your soulmate, consider the points listed below and whether they speak to you or not. If they do, it could indicate it’s worth giving your ex another chance. They very well may be “the one,” after all.

1. You Understood Each Other On Another Level

You know it when you click with someone in an intense, deep way. So should you consider your ex a soulmate if you had this type of connection? Bronstein says says.

"In life it’s not easy to fully understand someone else," she says. "Your soulmate will 'get' you, know you, and see you for exactly who you are." When that's the case, you finish each other's sentences, sense what the other is thinking, and feel as if you're hanging out with a best friend.

If this sounds like the connection you had with your ex, it’s possible they really were the one.

2. You Shared The Same Sense Of Humor

Sharing the exact same sense of humor with a partner often tops the list of relationships requirements. And that's because nothing is better than laughing at the exact same time during a movie or spending the night in bed giggling over inside jokes. It's yet another sign you "get" each other, and make a good pair.

But a great sense of humor can go deeper than that. "Laughter isn’t just a way to bond together and share good experiences," April Masini, a relationship expert, tells Bustle. "It’s also healing and medicinal."

Laughter makes it easier to recover after a tough day, to deescalate arguments, and to keep a positive attitude when life is being difficult. If you had that with your ex, add it to the list of reasons why they were your soulmate.

3. You Broke Up Over Something Little & Can’t Stop Thinking About How Silly It Was

It's natural to second guess a breakup, especially if you were the one who called things off. If you can't shake the feeling things ended prematurely, though, your ex may still be soulmate material.

As Masini says, "Sometimes the reason for the breakup was a consequence of circumstances — circumstances that no longer exist." Maybe you broke up over a disagreement you can no longer remember, or due to something external that has since blown over.

Again, many relationships are meant to end, and shouldn't be revisited. But if you can't stop thinking about how silly the breakup was, it may mean it actually wasn't meant to end.

4. You Had An Amazing Sex Life

Great sex can make a good relationship even better. But it definitely isn't everything, and can even cloud your thinking to the point you look back on an ex and think they were your soulmate, simply because you had amazing physical chemistry.

But Bronstein says an amazing sex life is still something to consider when assessing whether or not your ex is your soulmate. "When you feel so drawn to someone sexually and you also have the internal attraction factor and you have never felt more sexually compatible with someone," she says, it may be worth taking a closer look.

5. You Can't Seem To Find Those Same Feelings With Anyone Else

When you were with your ex there was this undeniable amazing feeling. But now that you've broken up, no matter who else you've tried to date, you can't seem to get those same feelings again.

Sound familiar? Then take the time to sit with those thoughts, and assess how true they really are. "Scan your life and see if there was ever a time or person you were with who made you feel happier than this person," Bronstein says. "If the answer is no, then there’s a possibility that he or she was your soulmate."

It's common to pine away for someone from your past, or to miss an ex after a breakup. But there's a difference between looking back with nostalgia and looking back and feeling like you let go of someone great. If they were your soulmate, you'll quickly realize how special they truly were, and will feel 100% sure about giving things another chance.

6. You Felt At Peace

If you think back over the relationship, was there a sense of calm whenever you were together? As Bronstein says, being around a soulmate means your "heart can relax," so you won't feel anxious or worried. They feel like "home," so to speak, or as if there's a familiarity there that makes this person stand out from others you've dated

A sense of peace isn't magical, however. It simply means you found someone whose energy matched your own. It means you approached life in the same way, wanted the same things, and were never forcing it. You were heading in the same direction, so everything felt right.

Peace is something that needs to be cultivated in relationships, and while it takes effort, it shouldn't feel like impossible work. With a soulmate, it'll seem like you're on the same journey, and life will be much smoother as a result.

7. You Successfully Went Through Ups & Downs Together

This comes from the sense that you have each other's backs, and are on the same team — no matter what happens. So often couples pit themselves against each other, constantly butt heads, or immediately start screaming the moment life gets tough. In soulmate relationships, that happens way less often.

8. You Respected Each Other

When you think back on your relationship, is it clear there was a solid sense of mutual respect. You likely supported each other's careers, were cognizant of each other's beliefs, and had a solid foundation of trust — to the point where you never had to wonder where they were or what they were thinking.

"Respect is one of the most important glues in a relationship — and a sign that this someone [had] 'the goods' to be your soulmate," Masini says. Respect and trust are two things you can work on building in any relationship, which means it's definitely something you can have again in a new relationship. But with soulmate connections, you don't find yourself vying for respect, or having to ask for it.

It sounds weird to say, but a soulmate will make you feel more alive than the average partner. And that's because "we are all made up of energy," Bronstein says. Some people will click with you in a way that simply feels right; and it'll seem like you can take on the world together.

It's a quality that's tough to put your finger on, but it's often so good, it makes life feel like a dream. Being with them brightened your day, inspired you to be a better person, and filled you with a sense of excitement for the future.

This feeling can stem from a mutual sense of appreciation, interest, and intrigue. Basically, "no matter how well you got to know them, you felt that there was always more to learn," Bronstein says. If you haven't felt this way since it may be worth considering if the relationship could be rekindled.

10. Time Stopped When You Were Together

Did it feel like you could talk forever, perhaps about your future, or some deep topic that brought you together? And then you'd look up and five hours had passed?

"There’s a weird phenomenon that happens when you’re with someone you’re in love with who could be your soulmate; time feels like it stops," Bronstein says. "Time feels like it stops because you are in the flow of life; you are completely present and that’s a rarity these days. Most people are constantly living in the past or the future." But with a soulmate, it's 100 times easier to be present.

11. You Both Made Each Other Feel Secure

Another big aspect of a soulmate is that they make you feel secure This could mean they give you the sense that they'd protect you under any circumstance, and always have your best interests at heart. The opposite should be true, as well — you would do whatever you could to make them just as secure. Was your ex someone you had this with? Would they never have dreamed about bringing out your insecurities, or doing things to make you feel worse about them? If so, they may be someone you shouldn’t give up on.

After thinking long and hard about some of the points discussed here, you very well may decide your ex is your soulmate. While it's still OK to move on and see who else you meet — again, there's always more than one soulmate out there — it's also worth it to be open and honest about ongoing feelings, and see where they lead.

This article was originally published on July 22, 2016