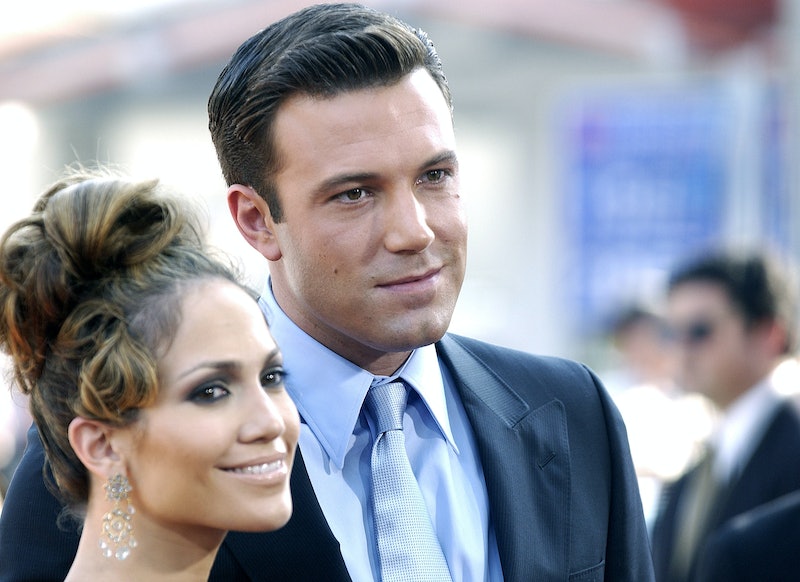 There are a lot of trends from the early 2000s that are currently making a comeback, but one we may not have expected to see is Jennifer Lopez and Ben Affleck’s relationship. Nearly two decades after they broke up, reports of Lopez and Affleck spending time together throughout May 2021 have officially put “Bennifer” back in the spotlight, less than one month after Lopez announced her split from fiancé Alex Rodriguez.

While we have the full scoop on Affleck’s chart, Lopez’s exact birth time is unknown, so as an astrologer, I can’t confirm her rising sign or see which houses in her birth chart each planet falls into. But we're still able to see her major planetary placements based on an exact birth date and location, so we can thoroughly examine the key planetary relationships that make Bennifer’s connection unique. Here’s what the stars have to say about Lopez and Affleck’s astrological compatibility and potential second shot of love.

Lopez (born July 24, 1969) and Affleck (born August 15, 1972) are both Leo zodiac signs, which makes them confident, gregarious, and a little prone to drama. As one of the fire zodiac signs, Leos are passionate people who put their whole heart into love. Because the sun is one of the most important placements in astrology (as it represents the core of who we are), sharing a sun sign gives Lopez and Affleck a natural understanding of each other on a soul level.

But the glamorous Leo action doesn’t stop there. Lopez and Affleck are actually double Leos, as they were each born with planet of communication Mercury in the sign of the lion as well. This gives the pairing a strong intellectual compatibility and social chemistry. In May 2021, TMZ reported that Affleck has been writing Lopez letters since February — which makes sense, given their Mercurial alignment. They both express themselves in theatrical and creative ways and inherently understand the other person’s way of thinking, so connecting with one another through words comes easily.

Leos are known as the superstars of the zodiac who naturally attract the spotlight, which explains why this attention-grabbing Hollywood duo is a hot topic in the media again. Unfortunately, this influx of Leo energy may have worked against them, as the couple cited “excessive media attention surrounding [their] wedding” as one of the reasons they delayed their wedding in 2003.

As double Leos, Lopez and Affleck have an effortless understanding of each other and appreciate each other’s unique ideas. But the real cosmic glue that’s bonding this pair is a set of powerful Venus/Saturn aspects in their charts. Saturn is the planet of commitment and Venus is the planet of love, so having these planets so strongly connected gives their relationship substance. Saturn is all about hard work, tough love, and long-term commitment, so emotions can get serious between them quickly. This enriches their relationship with deep meaning and value, but it can also put a lot of pressure and responsibility on them as a couple, which could prove to be too much to handle.

While the serious nature of Lopez and Affleck’s connection doesn’t guarantee a fairytale ending or wedding bells, it does speak to a relationship that will teach both parties crucial lessons about life and love, and impact their lives forever. Nearly 20 years after their split, Affleck was still gushing about J.Lo in early 2021 — the couple’s cosmic link has made a significant mark on each of them, and it grows stronger with time.

News of Lopez and Affleck’s rekindled romance came out within a few weeks of the first eclipse of 2021, which takes place on May 26. Eclipses in astrology are known for bringing about big revelations, prompting major life changes, and re-aligning us with our fate. And while various eclipses happen every year, individual eclipses repeat themselves every 19 years in what’s known as a metonic cycle in astrology.

In 2002, the year Lopez and Affleck first got together, there was a lunar eclipse in Sagittarius on May 26 and a solar eclipse in Gemini on June 10. This year, exactly one metonic cycle later, we will experience the exact same set of eclipses on the very same dates.

The return of 2002’s eclipse cycle will bring up nearly two-decade-old themes in everyone’s life, but they happen to be activating notable personal planets in both Lopez and Affleck’s charts specifically (including love and sex planets Venus and Mars, tough-love Saturn, and spiritual Neptune). Their relationship is in a powerful alignment with this metonic eclipse cycle, so it makes sense that poignant feelings and experiences from 19 years ago appear to be resurfacing.

Between Lopez and Affleck’s compatible charts and profound planetary aspects, as well as their relationship’s fateful alignment with the eclipse cycle, it’s not too surprising to see that this rumored couple is back in the spotlight. Whether or not Bennifer will last forever remains to be seen — but either way, astrology shows that the bond they share will always be a sincere one that helps them grow, mature, and understand themselves.