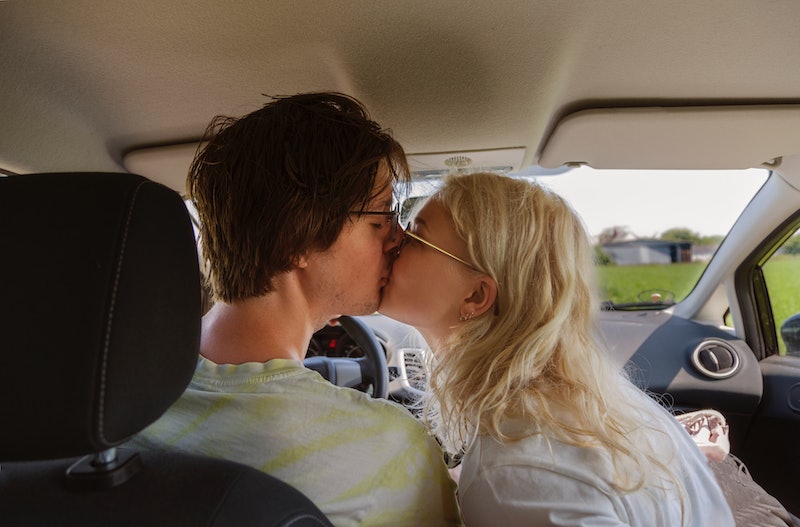 Few things are more thrilling than getting it on in the back seat of a car. It can be exciting to find a dark place to park, have a little privacy, try something new with your partner — and the ever-present threat of "omg, someone might see us" only adds to the experience. But what happens if you actually do get caught having sex in a car?

The truth is, if you decide to hook up in public in any way, you could get slapped with a fine — or worse. It depends on who catches you (is it a shocked jogger? parking lot security? an actual cop?), as well as where you are in the country since each state has its own laws regarding "lewd acts."

"In many states, the commission of a public 'lewd act,' which may include sexual acts, is a misdemeanor crime," David Reischer, Esq., an attorney in New York, tells Bustle. "Lewd acts, indecent exposure, and other such misdemeanors in most states will typically carry a sentence of up to one year in prison and a fine."

In that case, you might be a) committing a lewd act in public and b) "endangering the morals of a child," which could land you on the sex offender list. "Keep in mind," Joslyn says, "a minor doesn't have to see you in the act for it to be in violation, as the environment or likelihood of it occurring is more important."

On the flip side, if a secluded lake parks you in the dark, the likelihood of being seen goes way down, and a cop will (hopefully) send you away with a warning, Joslyn says. However, they will take a look at your criminal record, and you will probably get in more trouble if it isn't your first offense. That's why it's tough to say exactly what happens next if you get caught having sex in your car since each scenario is unique.

In many instances, it depends on the cop, Maria M. Barlow, an attorney in Illinois, tells Bustle. "Your attitude when dealing with police is a huge factor," she says. "Usually, if one is nice to the police, they may give you a slap on the wrist. However, if you act with aggression, you can plan to be charged accordingly, and your car most likely impounded."

From there, they can arrest you, and once you're taken in, you'll be charged with one or several misdemeanors. Then you'll have to place a bond, and court dates will be scheduled. "If convicted, you will have a criminal record," Barlow says.

While you may be able to get away with a quick hookup in a dark parking lot, pause long enough to think about the long list of harsh penalties, should you get caught. As Reischer says, there are many things to consider before "getting swept away" in the moment.

More like this
Bumble's "Compliments" Feature Lets You Message Before You Match
By Lexi Inks
Do I Have To Tell My Crush That I Slept With Her Ex?
By Sophia Benoit
This Company Will Send STI Tests Right To Your Door
By Lexi Inks
How To Deal With A Partner Who Body Shames You
By Lexi Inks
Get Even More From Bustle — Sign Up For The Newsletter