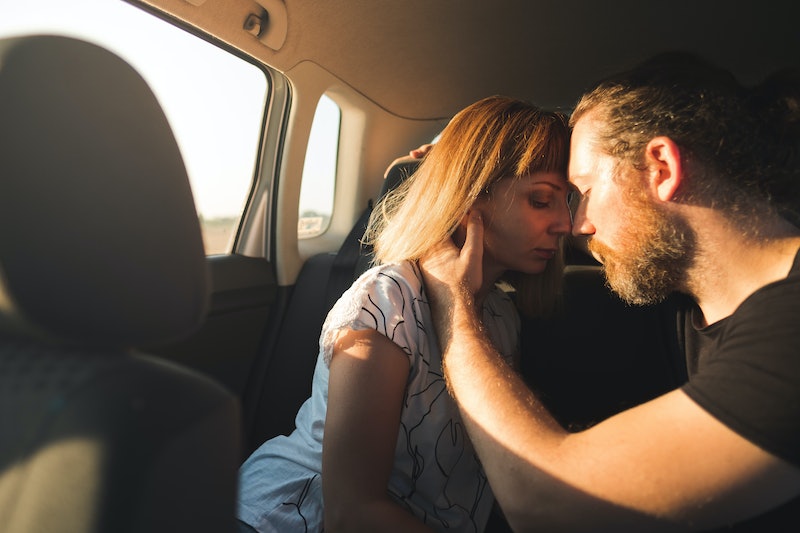 While you may think having sex in a car is something reserved for teenagers who have nowhere else to go, they certainly don't have a corner on the market. It's always going to be a fun option, no matter your age. So even if you have your own place, it doesn’t mean car sex necessarily has to be stripped from your repertoire. And, if you've yet to try it, it might be something fun to experience for the first time as an adult, too.

Studies have found that when it comes to the most common fantasies people share, having sex in “unusual places” and in “romantic locations” always top the list. And doesn’t sex in a car fit both those bills? Pretty much. (At least if you've seen Titanic.) All you have to do is choose the perfect place to park (if not on a transatlantic cruise ship, then maybe at a scenic overlook) and get to it.

But if you’re going to have sex in the car, especially if you’re a newbie, there are a few more things to consider before hopping into the back seat. It’s not just about the positions that work best for car sex, but the logistics of the whole thing. Here are nine things you should know first.

1. Cars Are For Quickies

If you find the perfect place to park, and have nowhere else to be, you might luck out and have plenty of time for an hour or two of foreplay, followed by extended periods of great sex on the backseat. But typically, cars are for quickies, so it's best to go into the experience with speed in mind. This works well if you're looking to hookup with your partner on your lunch break, or before heading back home to your parents' house after a date. But speed is also helpful when you don't want to get caught, which is something you'll definitely want to avoid.

2. You Don't Have Many Options For Sex Spots In A Car

If movies were to be believed, then you'd be having sex in the car as well as on top of it. But in reality, there are really only a few options, and it'll still take a bit of finagling to make them work. For passenger seat action, you’ll need to recline the seat a bit and hope you don’t ram your leg into the side of the door or that annoying thing that locks the seat belt in place. From here, the best sex position to try is Cowgirl position, either regular or reverse.

Any position where you can’t fully stretch out your legs is liable to cramp up something. And car sex is pretty much the exact recipe for that. That's why, if you know that you'll be having sex in the car, you might want to do a few stretches first; yoga stretches, ideally, because they open the hips — and even give your libido a nice healthy kick into action.

"Yoga is an excellent practice to increase flexibility [and] become aware of your breath," Kim Anami, a holistic sex and relationship expert, tells Bustle. "[Yoga] has been scientifically studied to improve libido. Open hips equals an open heart!" So before your date, try a few poses, and then head out knowing you've done your best to prepare.

4. You Definitely Want To Crack Open A Window

OK, let's think about Titanic again, since it has the most iconic car sex scene. Remember when Rose's hand dragged down the steamy window? It gets hot inside a car when you're getting it on, which of course adds to the sexiness of it all, as you and your partner fog things up and get drenched together.

But the problem with steamy windows is that they're a dead giveaway that something is going on inside the car. And, if there happens to be a nosey passerby, they very well might call the fuzz on you. A (literally) steamy car sex session may seem worth it in the moment — but no one wants public indecency on their permanent record.

5. Leather Seats Aren't Going To Feel Nice On Your Skin

Let’s put it this way: Rugburns pale in comparison to the feeling of ripping your moist and sticky skin off a leather or vinyl car seat, so keep this in mind as you shimmy around your sedan. Leather also doesn’t allow for much movement, which tends to be necessary for good sex. So this is where that whole thing you learned in Girl Scouts about keeping a blanket in the trunk of your car at all times will come in handy. Lay it down to spare your thighs and back from sticking. No blanket? Then maybe consider keeping your clothes on while doing the deed.

6. If You Rely On The Radio, The Mood Could Be Killed

If you're the type who likes to put music on in the background during your most intimate moments, double-check that your aux cord works. Because, while the radio is always an option, it really can kill the mood when you're looking for slow jams, but the only song coming through is Elton John's "Circle of Life," or an ad for a local insurance company. No good.

Ideally, you'll have a playlist chockfull of your favorite songs, so you won't need to rely on the radio. But double check in any case.

Not to put a damper on your car sex fantasies, but you definitely need to choose a place to park that’s very well hidden, and, ideally, to do so at night. Why? Well, other than the possible embarrassment factor of getting caught, having sex in public is against the law. Plus, it's not cool to potentially expose a third party to your sex life, since they can't consent to it.

Although the laws differ from state to state, getting caught having sex in public is usually considered a misdemeanor, and can include being regarded as a lewd act or indecent exposure. In some cases, especially if kids happen to stumble across your tryst, it may even result in you having to register as a sex offender. Basically, it's not worth the five minutes it would take to drive somewhere more secluded.

Sex has a pretty potent smell, and that smell lingers. If you don’t crack a window or air yourselves out, you’re going to stink like sex for a bit, which isn’t necessarily a bad thing. But depending on what you have planned after your romp in the car, it could be awkward for those who have to deal with smelling you. Just something to be mindful of.

You're also going to get sweaty, not only because of the close quarters but also due to the effort it takes to successfully hook up in a car. That's why it might be a good idea to keep a few toiletries in the glove compartment, like face wipes and hand sanitizer — and maybe even a clean shirt — so you can freshen up afterward.

9. It Might Not Be As Fun As When You Were A Teenager

When you're a teenager, everything is fun and new. This isn't to say that having sex in a car is going to be a total drag and/or a waste of your time, but it's going to be a different kind of fun. So definitely don't go into it expecting to feel like you're 17 all over again. In fact, if anything, once you get in that back seat and realize you can't move like you used to, you'll probably feel older than younger ― which is still fun! Just in a completely different way.

More like this
How To Do The Intimacy-Boosting Lotus Sex Position
By Laken Howard and Lexi Inks
Are Quality Time & Physical Touch Love Languages Compatible?
By Lexi Inks
I Never Orgasm During Sex. What Can I Do?
By Sophia Benoit
Cookie Jarring Is The Dating Term You Need To Know
By Sophie McEvoy
Get Even More From Bustle — Sign Up For The Newsletter

This article was originally published on Oct. 6, 2015