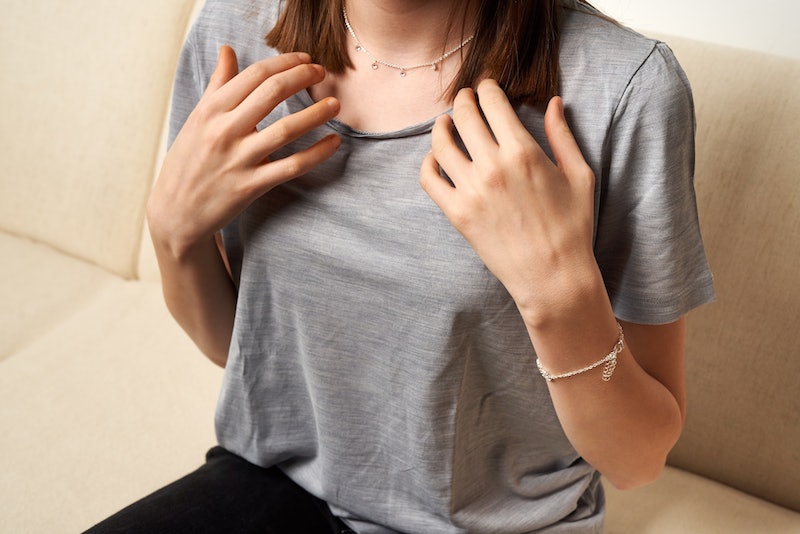 Whenever you’re feeling stressed, sad, or just stuck, you could turn to meditation, journaling, or talk things out with a friend — all tried and true ways to help yourself feel better. Or, by simply tapping on certain points of your body in an exercise known as EFT, aka emotional freedom technique, you could also find some feel-good relief.

EFT is based on beliefs from Traditional Chinese Medicine (TCM) and involves the use of acupressure to reduce emotional distress, says Hannah Kahn, an EFT tapping practitioner at Charm City Integrative Health. “Basically, you tap on the ends of a series of meridian points, which are the same energetic pathways [used in] other forms of Chinese medicine,” she tells Bustle. “By doing this, you allow your body to more easily process emotions and significantly reduce cortisol stress levels.” You just have to know the proper tapping points for EFT so you can turn to the method whenever you need a reset.

Each tapping point on the body corresponds with an internal organ, says Andrea Blindt, a mental health specialized registered nurse and holistic health practitioner. By putting repeated pressure on these points, you can start to form a better mind/body connection while releasing the “stuck energy” that’s got you feeling angry, sad, or stressed.

It can help to think of this energy as an electrical pulse that turns a light on and off. “When we have heightened emotions in our body the current is turbulent, which can cause the light to flicker or not shine as brightly,” Blindt tells Bustle. “By tapping on the current we support the flow, which allows the light to work properly.” Here’s how to give the technique a try.

How To Do EFT Tapping

Repeat this statement as you use your fingertips to gently tap on all of the meridian points listed below. According to Blindt, you should gently tap on each point seven to 10 times before moving onto the next one. “The entire process works together to release and flush,” she says. Once you finish, rate your feelings again. Kahn recommends repeating the process until your rating goes down.

Because tapping is a form of energy work, Kahn recommends tapping intuitively and paying attention to how you feel as you go — there’s no set amount of time you have to tap for, so tune into your body to see if you should keep going. With that said, here are some common tapping points to try.

1. Pinky Side Of Hand

Many practitioners start by tapping on the side of the hand, which is called the Karate chop point. This meridian is linked to the small intestine, Blindt says, and it aids in your ability to release what no longer serves you.

This tapping point is linked to the bladder. “It supports our ability to release irritable feelings in order to reestablish peace,” says Blindt. The inside of the eyebrow is also associated with emotional healing, Kahn says, which is ideal if you need to release trauma, frustration, sadness, dread, or hurt.

This meridian is linked to the gallbladder, Blindt says, and it supports your ability to let go of blame and resentment so that you can move forward in life. Kahn notes that it’s also tied to compassion and clarity.

Tapping under the eye hits the meridian linked to the stomach, which helps you release feelings of despair so that you can feel peaceful, Blindt says. You can also tap under the eye for tranquility and contentment, Kahn says, or to release anxiety, fear, cravings, and disappointment.

This spot is the “governing meridian,” Blindt adds, which means it supports your ability to accept yourself and others with compassion. Tap between your upper lip and nose for self-acceptance, empowerment, and compassion, Kahn says. This area can also help you let go of feelings of embarrassment, powerlessness, shame, grief, and fear of failure.

The spot right below the lower lip is associated with security and self-acceptance, Kahn says. It releases shame, confusion, and uncertainty. It’s also the central meridian, Blindt says, which is another point that aids in your ability to accept yourself.

The collarbone area on your chest is linked to the kidneys, which Blindt says supports your ability to ease into the future while releasing fear and excess worry.

This meridian, located on the side of the chest on your ribs, is linked to the spleen, says Blindt. It supports your self-esteem, confidence, and overall ability to move forward in accepting yourself and others. Tapping here is a good way to move on from criticism, indecision, and worry, too.

This meridian is linked to many energy circuits. “It’s a meeting point of sorts,” Blindt says. “It supports your ability to discern, gain clarity and insight, and connect spiritually.” Think of the top of your head as the point of intuition, wisdom, clarity, and spiritual connection, Kahn says.

When Should You Tap?

You can tap anytime you want. “There’s no way to overdo it as long as you pay attention to your body and emotions and determine what’s best for you,” says Kahn. Just be aware that you might experience a wide range of emotions as you go through the process.

“We can store energy in our bodies for a long time,” she says. “Sometimes, while tapping, memories come up that signal where an emotional experience originally stemmed. It can be powerful and also upsetting when these things arise.” But it’ll also come as a huge relief, which is the whole, ahem, point.