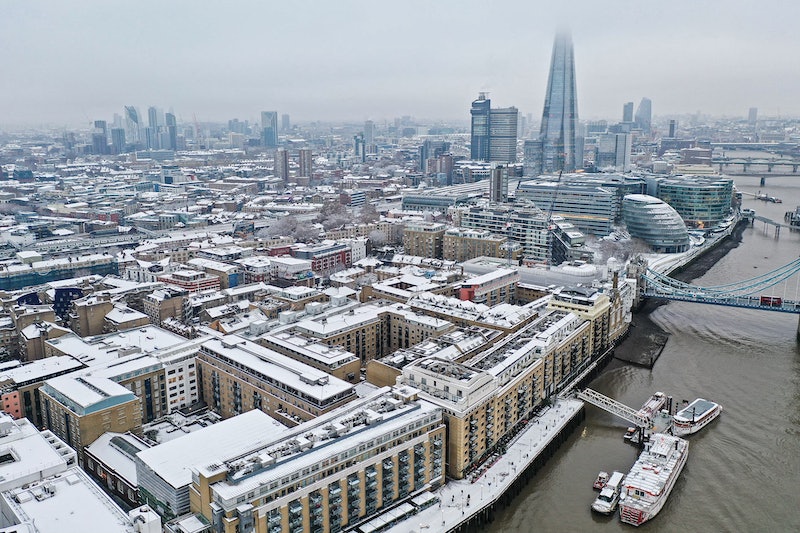 Perhaps you’ve noticed already, but a decent portion of the UK is currently hidden under a thin blanket of grit-speckled, slushy ice. And if you haven’t been outside (don’t blame you, frankly) fear not, internet is having a field day also, akin to the Big Jet TV twitter storm caused by Eunice in Feb.. Though the idea of a snowy December probably seems quite idyllic on paper, conjuring up visions of rom-com protagonists jogging through blizzards to reunite with their very own Mr Darcy outside quaint and expensive stationary shops, the reality of snow here is much more chaotic. Think sledging fails, cancelled trains, and hundreds of very confused dogs in big jackets venturing out into the cold.

It’s well documented that the country grinds to a halt at the mere mention of snow – scores of flights have been delayed or cancelled due to the harsh weather, per the BBC, with trains and roads also being seriously affected by ice and heavy snowfall. Still, you can always count on ever-inventive Brits to see the funny side of the situation.

And the moment the flakes began a-tumbling yesterday evening, with the most disruption hitting London and the South of England, intrepid adventurers started to grab their sledges, snowboards, and phones to document the mayhem as it unfolded. Some perfectly captured the essence of a “smug snow day” – following in the well-trodden footsteps of the hilarious Harry Trevaldwyn and last year’s weather-themed viral video – by documenting their own gleeful stomps through the unsightly slush, while one caught a spontaneous snowball fight that broke out at a London tube station between delayed commuters.

Naturally, somebody also found a spare moment to build a snowman in the middle of the North Circular. Pure genius. Bask in the best of it below…

More like this
Here’s What TikTok's "Mascara” Trend Is *Really* About
By El Hunt
90 Epic Truth Or Drink Questions To Play 'Say It Or Shot It' With
By Bustle UK
Gen Z Are Twice As Likely To Identify As Queer, According To New Data
By Sam Ramsden
Matt Hancock’s TikTok Is The Most Matt Hancock Thing Ever
By Sam Ramsden
Get The Very Best Of Bustle/UK
Sign up for Bustle UK's twice-weekly newsletter, featuring the latest must-watch TV, moving personal stories, and expert advice on the hottest viral buys.