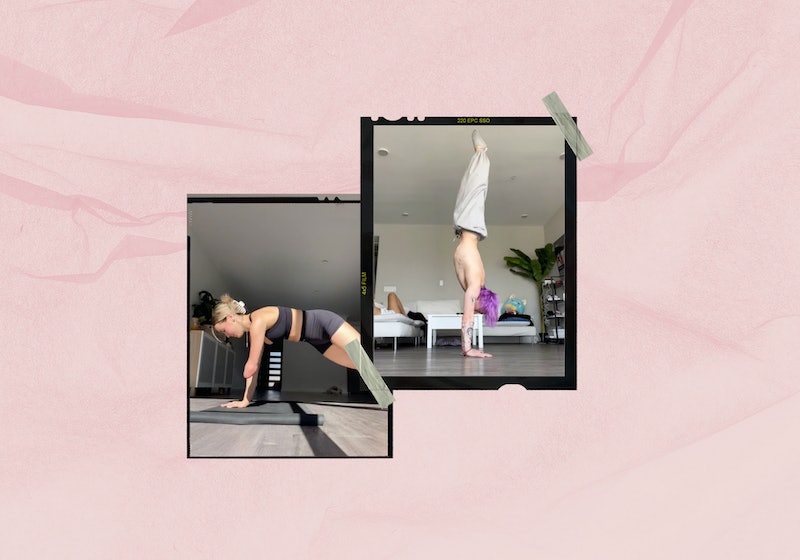 TikTok has become a one-stop shop for all things fitness. You can go to #FitTok to find exercise move tutorials and workout inspo, like the 12-3-30 treadmill routine and the infamous hot girl walk. But the platform is also full of fitness trends that are simply meant to be impressive, like the latest headstand challenge.

The headstand challenge, started by TikToker Bryce Mckenzie, entails exactly what you’d think: holding yourself up in a headstand (or handstand, depending on your skill level) just like the kind you see serious yogis performing on their mat. But there’s more. Some folks begin in a high plank before smoothly transitioning into a headstand (and if you’re Bryce, end by flipping magically to land on your feet). The challenge is set to a chill original sound by Ian Asher.

While a headstand is impressive enough, some people are taking the challenge one step further by letting their feet drop backward for a truly gravity-defying, spine-bending pose. Addison Rae, for example, tried the move on a beach where she did a headstand and then lifted her arms up as well to balance solely on her head. In response, one person commented “how in the world” and another rightfully asked, “how do you even do that?” Here’s what to know about this viral pose and how to work your way up to it.

According to Jenni Hackworth, CPT, a yoga instructor with White Lotus Yoga, the backbend-y handstand that Rae demonstrates is actually called a scorpion pose, named because your legs end up looking like a curled scorpion tail. And yes, it’s just as tough as it looks. “This is a challenging pose that should only be attempted by more advanced yogis,” Hackworth tells Bustle. “On a scale of one to 10, it’s easily a nine or 10.”

The move calls on a whole slew of muscles, from your shoulders and arms to your back and abs. It also requires a ton of balance to stay upright, plus lots of flexibility, especially in your spine, chest, and hip flexors, Hackworth explains. If you’re so impressed that you’d like to work up to scorpion pose — and maybe post a video of your own — take it slow and start by practicing postures that’ll build these muscles.

If you want to gain the flexibility required for scorpion pose, Hackworth suggests also practicing cat-cow to stretch your ankles, thighs, hips, shoulders, and chest, then following up with locust pose to hit your thighs and shoulders, and plenty of camel poses so that the front of your body, abs, and hip flexors loosen up. Working up to a wheel pose — aka a backbend — will also help you out.

Another pro tip: “You can start against a wall and walk your legs down until you feel the stretch,” Hackworth suggests. “Hold that position for several breaths, release the pose by waking your legs back up the wall, then try again.” Of course, this headstand challenge is called a challenge for a reason, so you might prefer to keep your feet firmly on the ground and watch as others take it on.

As you practice, take this video by user @madiyoungg as the ultimate inspo. She makes the plank-into-headstand feat look like a cinch. (Goals.)

More like this
TikTok's Grumpy Girl Stomp Is Here For Your Moody Days
By Carolyn Steber
Wait, Vabbing At The Gym Is What Exactly?
By Carolyn Steber
11 Upper Back Exercises That'll Help You Stand Upright
By Carolyn Steber
How Did Pilates Become So Popular?
By Elizabeth Narins
Get Even More From Bustle — Sign Up For The Newsletter