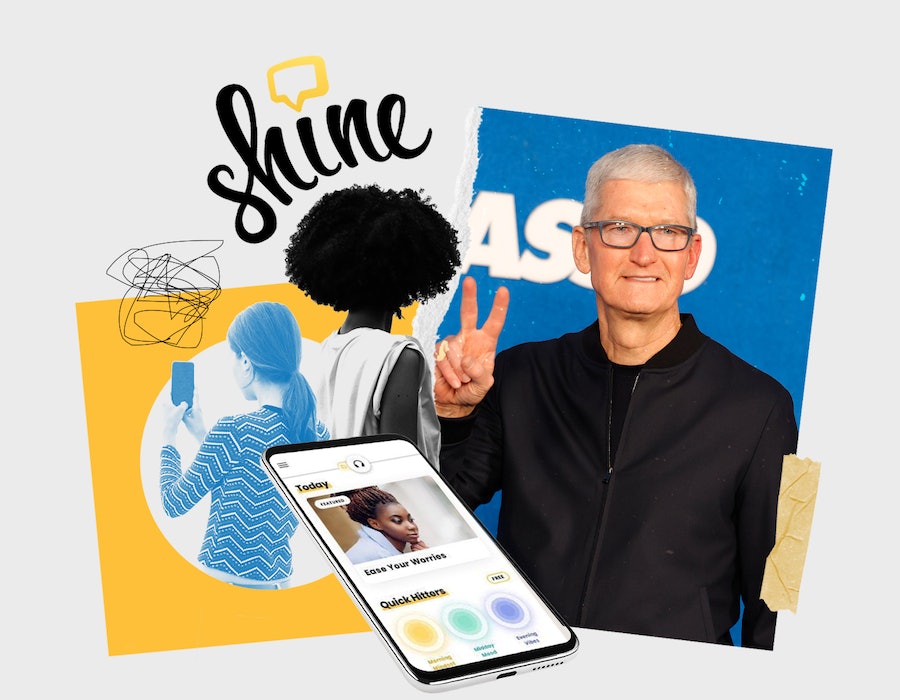 Tim Cook bends over his knees on a bench in Madison Square Park. “It’s pretty spectacular,” he says in a slow Alabama drawl, turning his eyes upward with a smile. This is one of Cook’s favorite expressions. He uses it four times in our 15-minute conversation, largely to describe the success of the app market and the ability for developers to build global businesses from coffee shops.

The latter is the reason we’re meeting. It’s the Apple CEO’s first trip to New York in two years — he starts his day at the Apple store in SoHo, before viewing an exhibition of iPhone photos at the International Center of Photography on the Lower East Side — but by 11:30 a.m. he’s meeting Naomi Hirabayashi and Marah Lidey, the former colleagues turned co-founders of mental health app Shine, which Apple believes is the best of what its devices can facilitate.

Shine’s M.O. is simple: to deliver inclusive, guided meditations and journaling tips. “When we looked at the way that wellness was being marketed or talked about on a mainstream level, it didn’t resonate,” Hirabayashi says. “It felt like it was kind of this luxury commodity that was sold to a certain persona, a certain body type, a certain disposable income.” Shine now has 4 million users in more than 189 countries, while a corporate add-on, Shine at Work, is used by companies like Smile Direct Club to facilitate psychologically healthy workplaces.

This isn’t Apple’s first time signal boosting this particular endeavor. In 2019, Shine was selected for the first Apple Entrepreneur Camp, a two-week program in which founders from underrepresented communities are given exclusive access to Apple engineers, strategists, and business leaders. “It would have taken us years to really garner those learnings from testing and failing,” Lidey says. “So to have that consolidated in a really succinct program was a huge catalytic moment.”

Since then, the app’s growth has been exponential. “We saw our best growth to-date from both the pandemic and then the uprising for racial justice, and we really didn't change much,” says Lidey, though the meeting with Cook marks a significant milestone of its own. “Our office was in the Flatiron area, which is why we’re going to be meeting there,” Hirabayashi explains the day before their meeting. “That area holds a lot of special meaning for us because it’s where we came up with the concept of Shine and opened up our first Shine office.”

Cook is wrapping up with Hirabayashi and Lidey by the time I arrive. It’s been an emotional meeting for the founders. “If someone had told us when we were starting the business right over there, that this would happen five years later, it would have blown us away,” Lidey says.

In the conversation that followed, I asked Cook about the special relevance mental health apps in 2021, the way leaders can balance employee mental health with delivering tough feedback, and why not even Steve Jobs could predict the scale of the app market.

Why is it so important for you to highlight the work Shine does now?

Well, they won [Apple’s Best of the App Store] in 2020. And there probably wasn’t a year that would have made them more essential — with the pandemic and the murder of George Floyd, and these things coming together and intersecting in such a way that no one would have predicted.

And I think mental health is a crisis. And it’s one that has been stigmatized so much. It was for so long that people suffered in silence and in isolation. [Shine] have done this incredible job, bringing together community and stitching together a number of different things that will make [change] systemic in nature instead of a slogan. So I’m super impressed by what they’re doing and how they got started.

Both of Shine’s founders, Naomi and Marah, told me that they find it important to talk about their mental health as leaders at work. Is that something that you ever do?

Yeah, I do. I always talk about what gets me away from the stresses of the day. And for me, my meditation is hiking. It’s the being out in nature and feeling so insignificant in the world, and a lot of the problems tend to seem a little smaller. And I do talk about that freely. I think it’s important. [Pauses] You know, I don’t have an S on my chest and a cape on my back. I suffer from the pandemic lows as much as everybody else does. I know that I’m privileged in so many ways, but none of us are privileged to the point that mental health is not a key factor in life.

When I started out in magazines, it was still the era that was much more like The Devil Wears Prada. Have you seen the film?

And we’re now quite far away from that type of management, but I wonder in your own work how you reconcile being a leader and giving feedback with employee mental health. For example, when people get upset if you're trying to give difficult feedback. Is that something that you ever wrestle with?

I think we all wrestle with it because you want to be frank and candid. But I do believe there’s a way to do that constructively, versus destructively. And I try my best to always be constructive.

Yeah, it is. But an important one. If you shy away from doing it because of your fear of it, that’s also not good at all because you're not helping anyone. It’s all about being our best version of ourselves, and when you look at it like that, you tend to drop your defensiveness.

It’s interesting that you’re drawing attention to an app like Shine, when the conversation around technology is so fraught, especially with recent reports about how Facebook and Instagram impact young people. Is that something that weighs on you?

I’ve always thought that technology should serve humanity and not the other way around. And I always worried about people using technology too much. And so, we came out with Screen Time to try to give people a true reading of the amount of time they’re really spending on their devices because generally it’s a lot more than they say.

But that’s just one element. It’s also what you’re doing [on them]. I’ve often worried about the endless scrolling, the surrounding yourself with negativity and so forth. And so elevating a company like Shine and getting people to go check it out — that’s a great use of our technologies because that does serve humanity. Their whole company is based on this. And it’s how we look at the world. We want people to do things with their devices, like the photography exhibit that we both enjoyed, or connecting with family and friends with FaceTime. Not endless, mindless scrolling.

Have you ever gotten into a spiral where you were using a device in a way that you later thought “Oh, actually, this isn’t great”?

Probably. Like many people, I found that when we deployed Screen Time, my estimate of what I was doing was different than the reality, and it did cause me to change. And I hope everybody goes through that process.

In a different direction, I was looking back to when the App Store first launched in 2008 and Steve Jobs’ prediction for its success. The market has now vastly exceeded his expectations. What do you think about its success that made it so hard to predict?

[Smiles] I think all of us live in a little of a box of what things currently are. Apple does a fantastic job of not doing that with products, but in terms of estimating, it’s [more difficult]. At that time, our gut was that eventually everyone would want a smartphone, but we did not envision the speed at which that would occur. Because I remember we talked about “Should Apple make a feature phone?” if you remember them. But we felt, “No, no, no — the future is the smartphone, so let’s put our energies in there.”

But nobody — none of us — would have guessed that there would be 1.8 million apps in the store, that there would be over 2 million people just in the United States that are working on apps, that the commerce across the store ecosystem last year was over $170 billion just in the United States. Worldwide the App store ecosystem saw 643 billion in billings and sales in 2020. Those were all things beyond the imagination at the time. Think about it — it’s an economic miracle. And it’s why [apps like Shine] can have a global business. I mean, they started a global business from a coffee shop.

Naomi and Marah were also part of the Apple Entrepreneur Camp. Can you tell me a little bit about how and why Apple supports the developer community?

There are almost 30 million registered developers worldwide. This is mind-blowing, and what we’ve tried to do is to make it easy by providing a lot of developer tools where people don’t have to do the heavy work, but they can focus on their passion. They don’t have to worry about coming out with developer tools and all this kind of stuff. We’re trying to level the playing field, so that everyone with a great idea can start a global business.

So finally, apart from Shine, what are your favorite apps?

[Smiles] I like a lot of them. I’m not sure how to pick between them.