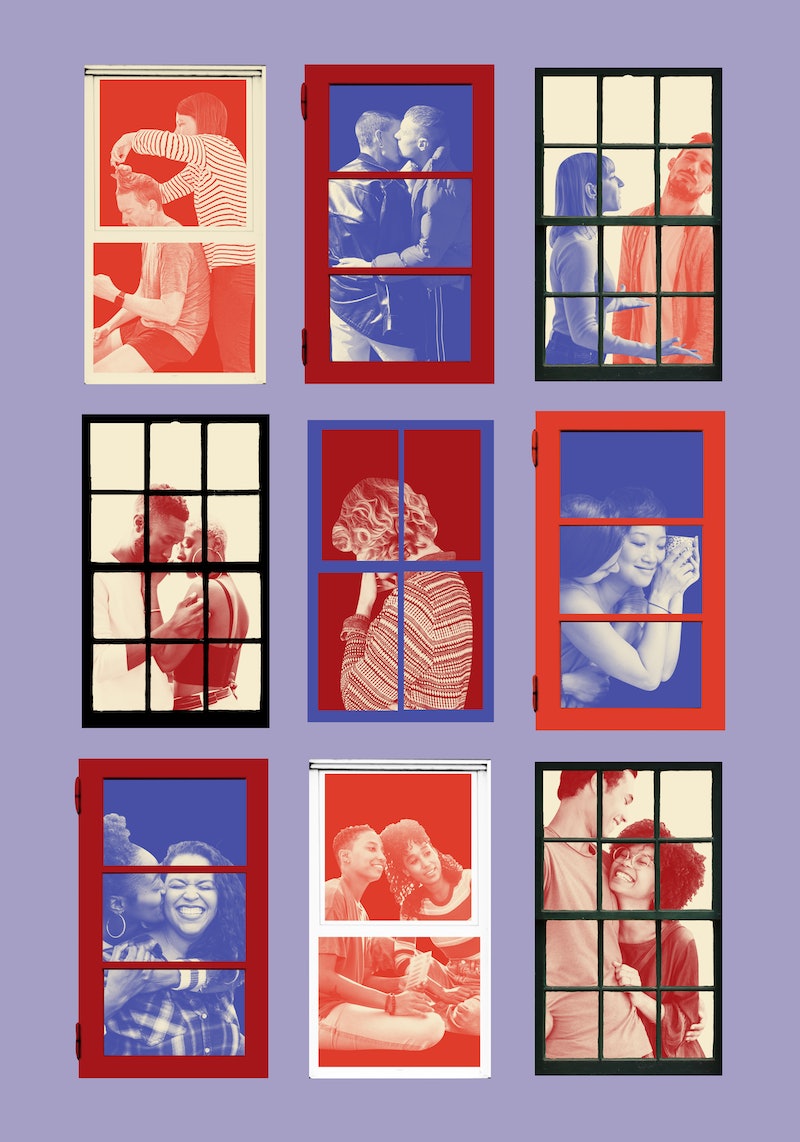 Before the COVID-19 pandemic, Mariah, 26, only saw Leigh, her partner of one and a half years, on weekends; she lived in central New Jersey, and he was in South Philadelphia. But quarantine changed all that: Six months after deciding to “ride it out” together in Philadelphia, he moved into their own place, and three months later, they were engaged. “Amid a global pandemic, all [the roadblocks] of being in a long-distance relationship seemed so much smaller and manageable, especially given the mental health benefits of living with a loving, supportive partner,” Mariah tells Bustle.

But their turbo relationship, one that accelerates quickly, wasn’t all easy. Mariah and Leigh had to adapt to the new reality of being with each other nonstop. Mariah is introverted and values alone time, whereas Leigh, according to Mariah, craves “all the human interaction they can get.” They started divvying up chores and outings — like going grocery shopping alone rather than feeling the need to turn the mundane event into a bonding experience.

The two have also had to work on communicating their needs. Mariah, who tends to wear her feelings on her sleeve, has been trying to vocalize how she feels, rather than assuming that Leigh can tell what she’s thinking. And while asking for help and starting a dialogue have always been difficult for Mariah, Leigh never makes her feel she’s being a burden by doing so. “He’s remarkably supportive, encouraging me to take care of myself in ways I historically neglected, whether that’s mental health or telling too many people ‘yes,’” Mariah says.

Despite the challenges and remaining unknowns, Mariah has no regrets about moving in with or getting engaged last year. “Living together has been such a positive change in my life,” she says. “We’re just really happy.” Mariah and Leigh are now planning a fall 2022 wedding, hoping the pandemic won’t be an issue by the big day.

The pandemic saw many couples like Leigh and Mariah reaching milestones like moving in together and getting engaged faster than they typically would have. According to a June 2020 survey by eharmony of more than 2,000 people, more than 30% of people newly living with their partners believed the prior two months felt equivalent to two years of commitment, while more than half of new couples felt more committed to their partners. But one year in to turbo-charging through milestones — and with a return to “normal” in sight — some couples are grasping onto the stability of a newly solidified relationship, while others are moving forward with a more que será, será mindset.

Tennesha Wood, dating coach, matchmaker, and founder of The Broom List, a matchmaking company exclusively for Black singles, tells Bustle that the pandemic has fast-tracked how and why people couple up. “Companionship, convenience, and safety are now top of mind, leading many singles from the first date to partner to roommate at record speed,” she says. “With safety in mind, [couples] began quarantining together and fell into relationship patterns even before defining the relationship.”

“Giving up my life in New York and moving in with a guy I was barely dating terrified me.”

Erin, 37, didn’t wait to DTR before moving to Florida with a partner. She had been dating her partner on and off for about a year when they decided to just be friends in February 2020. When the pandemic hit, they resumed casually dating, and soon Erin’s partner found a house to rent in Florida and asked her to come along. “Giving up my life in New York and moving in with a guy I was barely dating terrified me, but facing another citywide shutdown during the dead of winter was scarier,” she tells Bustle. She contemplated the pros and cons, and a week later she ditched her lease and relocated to Florida with him.

Going into the move, Erin, who’s divorced, had visions of a rom-com relationship unfolding, complete with fantasy scenarios about having breakfast in bed, dancing in the kitchen, and stealing kisses. “None of that has happened,” she says, looking back on the last year. “We both do sweet things for each other to show we care, but it hasn’t been the idyllic scenario I created in my mind.” Erin says that on any given day, the two feel like a couple, friends with benefits, or just plain old roommates. Additionally, they’ve both been unemployed and job-hunting. And while finances haven’t caused a ton of tension in their relationship, Erin’s constant focus on her bank account makes it difficult to enjoy things like going out for meals together — something her partner loves to do.

Despite these factors, Erin feels confident that she made the right decision — and not just because it was a welcome change of scenery. “On one level, it feels like we skipped a lot of steps, but it also feels very natural to be around one another 24/7,” she says. Not only have they settled into a comfortable routine, but they’ve also made conscious efforts to adapt to each other’s stressors and pet peeves. “When we have the rare disagreement, we take time to discuss and work through it,” she says. “We have a ton of respect for one another.”

That said, they haven’t defined the relationship beyond pausing their dating apps and exclusively sleeping together — and she’s OK with that. “As two people who have been married before, we both really enjoy the flexibility that comes with being single,” she says. Erin plans to return to the East Coast this spring, without her partner or a relationship label, to spend time with her family before hopefully enrolling in a nursing program. She and her partner haven’t yet discussed what their relationship will look like, but she envisions him in her life forever — whether that’s as friends, in an open relationship, or something else.

“He is my full in-person support system.”

Like Erin, Abby’s turbo relationship was kickstarted by relocation. Abby, 34, and her boyfriend, Bill, had only been dating a few months and lived separately in Washington, D.C., when the pandemic started. After a few months, they decided to move to Chicago together — where Bill owned an apartment he was struggling to rent out — despite Abby’s previous assertion that she wouldn’t do so unless they were engaged. As an extrovert, Abby has struggled in quarantine — something made even harder after moving to a new city, where she didn’t know anyone besides his family. “I rely on him to fill a lot of needs for me,” Abby tells Bustle. “Things I normally rely on many people [for], now Bill fills a lot of the roles. He is my full in-person support system.”

Looking back, Abby realizes she and Bill had to navigate the usual quarantine stressors — like agreeing on a definition of COVID-safe activities — while also getting to know each other better on an accelerated timeline. “He will go days without leaving the house, which is really shocking to me,” she says. “He is not big on planning for moves even if they are cross-country, which is really stressful for me.” Despite these differences, Bill and Abby remain patient and empathetic with each other. “He is very understanding when I hit a pandemic wall and just cry all day,” Abby says.

But Abby doesn’t regret the rapid pace of their relationship. In fact, she says that in retrospect, she would’ve moved to Chicago earlier, before the tough pandemic winter. Ultimately, Abby feels the experience has made them stronger, and she’s hopeful that getting through this means they can get through anything and “will be together forever.”