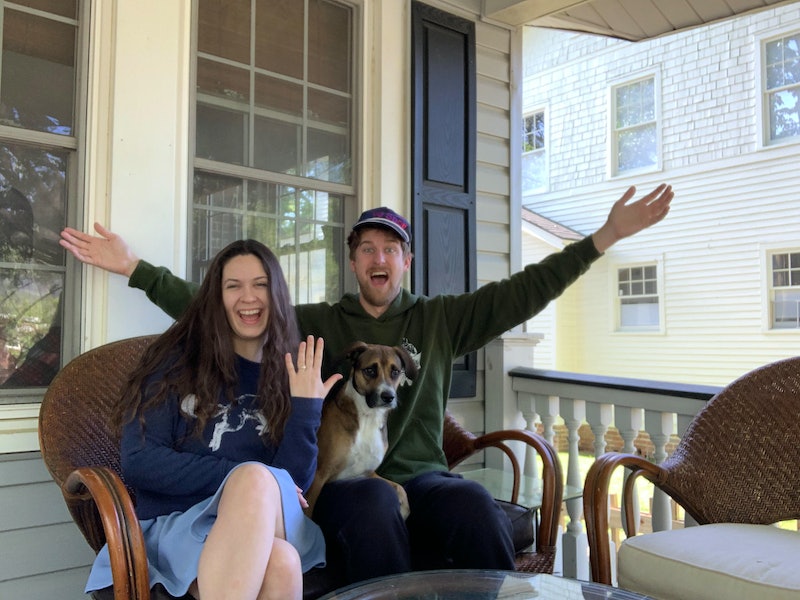 While stuck inside and self-isolating together, some couples are realizing they don't have long-term potential, and others are enjoying spending a little extra time with their partner. But then there are a few who are actually getting engaged while social distancing. Instead of waiting to pop the question after the stay-at-home orders are lifted, they went ahead and did so while quarantined.

Kelsi, 26, and her fiancé, Russell, 31, knew they wanted to get engaged before the coronavirus pandemic began, but being stuck inside further solidified what they were both feeling. "We found the person that we not only loved deeply, but could be with 24/7 and still laugh constantly," she tells Bustle. "Right now felt like the right time to get engaged because it felt like this ray of light; something that brought excitement for the future."

For some, popping the question while quarantined instead of waiting for the pandemic to be over, may feel inherently counterintuitive. Why would you swap candles and violins for sweatpants and takeout? But for Jill, 24, and her fiancé, Casey, 25, self-isolating together for three weeks pushed the proposal to the forefront of their minds. Finally, they decided enough was enough.

He fashioned a ring out of a black twist-tie and copper wire. I said yes to this humble little ring and it means so much to me.

"I woke up one morning and I just knew I was ready to be engaged," Jill tells Bustle. "Thankfully, he thought the same thing, so we decided to go for it right then and there."

The two went for a socially-distant walk, and found themselves under a row of blooming cherry trees. "We weren't fully prepared," Jill says. Casey had custom-designed a ring, but since the jeweler was closed, he couldn't pick it up. Instead, he fashioned one out of a black twist-tie and copper wire. "I said yes to this humble little ring," Jill says, "and it means so much to me."

Liana, 30, and her fiancé, Trav, 28, also had to think fast. They knew they wanted to get engaged, and Trav had been secretly planning a big event — he booked flights to ensure all their friends would be in town, and had even chartered a boat to celebrate on after the fact. But once the two began isolating, he had to rethink their plans and quickly come up with an alternative.

When Trav asked Liana to take a walk by the river, she became suspicious. "I knew something was [up] on the day," she tells Bustle. "I had no idea I would get so nervous. So, while I was laugh-crying, he got down on one knee and asked me to marry him."

Even though the experience of getting engaged while self-quarantining was "oddly romantic," as Liana puts it, some couples still plan to redo the whole thing once the self-quarantine is lifted. "When this is all over, [Casey] plans to propose the way he intended, with a real ring," Jill says, "so we get the best of both worlds!"

The same is true for Kelsi. "My birthday is on April 14, and we are doing a big Google Hangout with my friends and family," she says. "Russell plans to propose again live on the video call."

More like this
5 Signs You Have A Toxic Relationship With Yourself
By Lexi Inks
The 3 Zodiac Signs Most Likely To Get Married Later In Life
By Kristine Fellizar
4 Zodiac Signs That Will Take Forever To Admit They Like You
By Kristine Fellizar
17 Valentine's Day Tips For New Couples, Straight From Relationship Experts
By Carolyn Steber
Get Even More From Bustle — Sign Up For The Newsletter
From hair trends to relationship advice, our daily newsletter has everything you need to sound like a person who’s on TikTok, even if you aren’t.