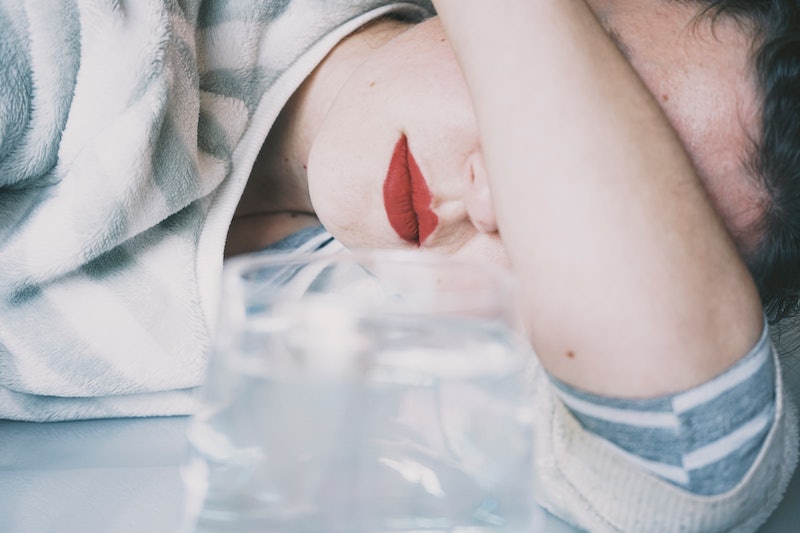 On two separate occasions in my life, I have accidentally gotten semen in my eye. In both cases, my partner was finishing himself off and I just happen to be in the wrong place at the wrong time, so BAM — semen in the eye. The first time sparked a rumor amongst our circle of friends that it was my preference, and the second time my partner and I laughed it off, despite the fact that semen in your eye hurts — badly.

Semen is made up of a whole bunch of things you probably don’t want in your eye. A fructose-rich fluid makes up 65 to 70% of it and citric acid, enzymes acid phosphatase, and lipids make up 25 to 30%. Other components of semen include, chlorine, zinc, sodium, lactic acid, uric acid, potassium, phosphorus, magnesium, nitrogen, protein, antigens, DNA, and a handful of other nutrients.

In addition to pain, it's technically possible to contract an STI if you get semen in your eye. According to the San Francisco AIDS Foundation, although the chances of getting HIV this way is "really, really low," it's still "theoretically possible." The reason for this is that HIV can pass through the mucous membranes of the eyes. As for chlamydia and gonorrhea, although the chances are low (but not as low as it is for HIV), it's also still "theoretically possible."

1. You Will Immediately Scream Out Several Obscenities

Upon contact, the only thing you can really do is scream and drop about 150 F-bombs. Unless your partner and you have agreed to them coming on your face so semen in the eye can be expected, it can be an awkward moment when it’s done by mistake. In between all your swearing, you’ll hear all your partner's apologies, and you’re likely to blame each other: “Well, you should have moved your face!” “Well, you should have better aim!”

2. Flush The Semen Out Of Your Eye With Lukewarm Water, Stat

While this should be the first thing you do, in the drama of it all, it usually falls down to second place on the list of priorities. However, if you can remember to do it immediately, you know, while you’re dropping expletives, that’s a good move on your part.

"Try to flush out your eye with water as soon as possible," Dr. Megan Stubbs, EdD, a doctor of education and a sex and relationship expert, tells Bustle. "It may feel like there is some serious damage to your eye, but it just usually ends up being irritated for a while."

It should be noted that semen in your eye will burn like hell, like a cross between burning and someone having elbowed you in the eye. There’s this weird dull pain entangled with stinging. But luckily, the feeling can be minimized if you act fast.

"The longer the ejaculate is in the eye, the longer/stronger the symptoms can be," Dr. Stubbs says. While your reaction might be to rub your eye after rinsing it, don't. It will just cause more irritation, so pat it gently dry.

4. Your Eye Will Start To Tear As It Tries To Get The Semen Out On Its Own

Tears are the eyes' way of protecting themselves from foreign objects, or as it is in this case, foreign bodily fluids. Although the tears you may have in this particular situation might be a combination of crying along with those protective tears, either way the injured eye will tear up and won’t stop until it's done its best to kick the semen out.

Again, while your instinct might be to rub your eye, it's important to let your eye do its thing. If need be, you can flush it again with water, but for the most part, don't mess with it.

5. Symptoms Should Clear Up On Their Own

You’ll want to keep an eye on, well, your eye in the next few hours and days that follow. "The symptoms should clear up on their own," Dr. Stubbs says. "So a doctor's visit usually isn't necessary."

Although you likely won’t have to go the doctor, Dr. Stubbs does advice that "if you're experiencing long-lasting symptoms or trouble with your vision" you should seek medical attention.

6. Semen In Your Eye Can Mess Up Your Beauty Routine

Once you've calmed down, your vision is less blurred, and you and your partner have stopped blaming each other, you may notice something else: your style is messed up. And I'm not just talking about the running mascara.

While these two facts about getting semen in your eye may not be as distressing as the possibility of an STI, they're still two things you can't be surprised by if they occur.

This article was originally published on July 13, 2015