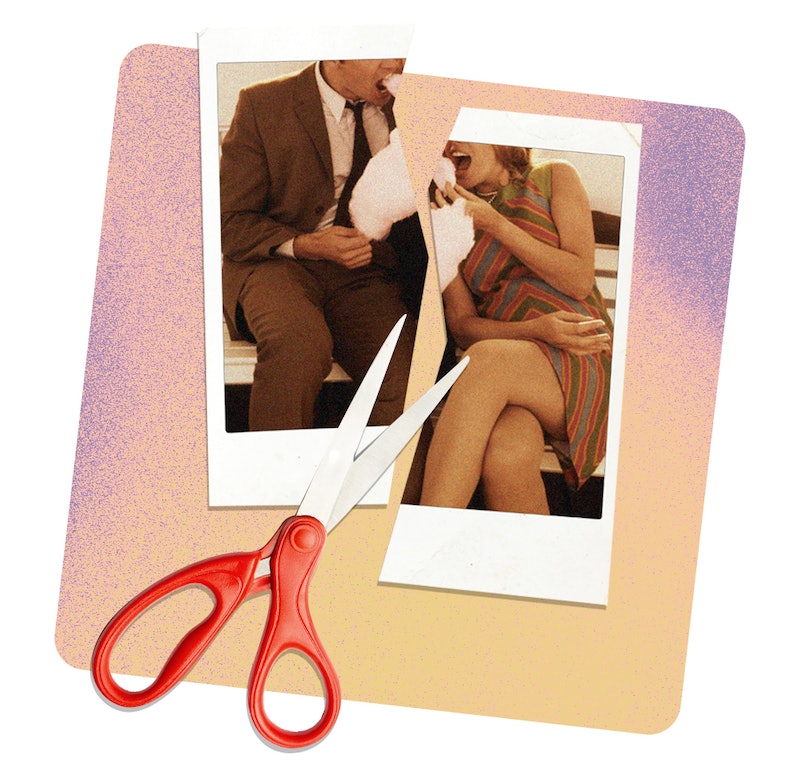 skaman306, Karan Kapoor/Getty Images
By Ashley Abramson
Dec. 16, 2021
How To Get Married

No relationship is perfect, but it’s not easy to tell when one has deteriorated past the point of repair. In TV and movies there is always a “breaking point”, like when Aiden leaves Carrie after she refuses to marry him that night, or when Rachel leaves Ross after he sleeps with someone while they were “on a break.” In real life, things are rarely as clear cut.

If you’re waiting for a lightbulb moment that isn’t coming but you feel in your gut that something is wrong, then this story is for you. Below you’ll find a series of relationship red flags you shouldn’t ignore, as suggested by therapists and people who’ve made the tough (or not-so-tough) decision to chose themselves.

Even the strongest relationships have tension from time to time. That’s just part of interacting with other humans. But if you feel like things are always tense, as though you have to tiptoe around your partner to prevent conflict, you may want to consider whether the relationship is worth staying in.

Yes, every couple has the occasional spat, but walking on eggshells is more often than not a sign your relationship isn’t an emotionally safe one — and that you may be better off with someone else. “If important topics consistently generate negative feelings, days and hours of an attitude, or you feel like something is off limits to bring up without it coming to a respective resolve, then it may be time to rethink your coupledom,” says Marilyn Simmons Bowe, PhD, a social-emotional learning coach for dating.

The Bad In The Relationship Outweighs The Good

Every relationship has its flaws — but the healthy, long-lasting ones have enough enjoyable, beneficial qualities to outweigh the bad ones. Intimacy can ebb and flow, but relationship coach Chloe Ballatore, author of How to Live: Find Love and Keep It says as a general rule, relationships that result in more pain than pleasure are usually on a path to breakup. “No one is perfect, but if your partner dips under 51% valuable, it’s probably over,” she says.

Also, don’t stick around on the promise of wholesale change. “The way I teach it to clients is that two-thirds of what you’re dealing with will be there forever,” Seattle-based couples therapist Zach Brittle recently told Bustle. “The secret in managing conflict in a relationship is: solve your solvable problems, and then create dialogue, compassion, empathy, and compromise around your perpetual problems.”

You’re Doing All The Work In The Relationship

We all bring different skills and qualities to the table, but in general, relationships are a two-way street. So if you’re consistently contributing more than your partner, you might be in a one-sided relationship, says Lauren Cook-McKay, a marriage and family therapist at Divorce Answers. “If you’re constantly the one suggesting dates, phoning, texting, or making plans for them, it means they don’t want to put in the effort to keep the relationship dynamic fresh,” she says. “When your emotional needs aren’t being addressed, and you’re the only one actively attempting to keep the relationship alive, it’s a solid indicator it’s time to call it quits.”

Case Study — Danielle, a hospitality manager, had been been dating someone for a few months, and she thought everything was going well. Then, out of nowhere, she noticed a major change in the frequency of communication from her ex. He stopped reaching out when they weren’t together, and when they were, things felt tense. “If your partner typically texts you every day, then that changes, that’s a pretty good indicator they aren’t thinking of you as often or you’re not as connected as you thought,” Danielle says.

You Feel Obligated To Stay With Your Partner

Another telltale sign of a failing relationship: You’re only staying in it because ending it feels harder. Relationships take work, and you might feel overwhelmed or guilty at the thought of losing all the hard work you’ve put into yours — or, understandably, you might feel scared of being alone. But Cook-McKay says dragging on a relationship out of obligation won’t do you or your partner any favors.

“Trying to conform to the pressure to ‘make it work’ at all costs can actually be incredibly damaging for you, your partner, and any family or friends that you share,” says Saba Harouni Lurie, a therapist in Los Angeles. “It could help to be kind to yourself and accept when you've reached your limit.”

You Feel Held Back & Unsupported

A long-term partnership involves two people moving in the same direction — but each individual should have the autonomy to pursue their own goals, too. If you feel like you’ve had to put your life on hold because of your partner’s decisions, you could stick around. But chances are you’ll start to resent your partner for holding you back, and along the same lines, you should at least feel supported.

Case Study — Chanel, who owns a bath and body product business, broke up with her ex because he was unsupportive of her goals. While she had noticed a few red flags before — her partner was critical and could be controlling — she says her breaking point was his negativity toward her dream of quitting her teaching job to start her own business. “I asked my boyfriend about starting a business and he literally laughed in my face and told his friends like I was a joke,” Chanel says. The next day, she filed for her LLC and launched her business.

Ideally, your partner should bring out the best in you. If you find yourself feeling like you have to pretend or hide certain parts of yourself to feel secure in the relationship, cut and run. “This is a tough indication to identify, and you’ll only notice it if you’re really honest with yourself,” says Cook-McKay. To find out, ask yourself if our relationship is a good match for your personality and if your partner is helping you grow into a better version of yourself. “If the answer is no, it’s time to call it a day,” she says.

You Don’t Like Who Your Partner Is Becoming, Either

Everybody changes. But if you didn’t sign up for the type of change you’re seeing in your partner, you have every right to say goodbye. For example, maybe your partner has a new group of friends you don’t like, or they have different habits, beliefs, or goals than when you first started dating.

“Change is inevitable, but that doesn’t mean it’s always good,” says Washington-based therapist Leda Kaveh. “If someone starts to become a different person in a way that makes you significantly uncomfortable, then it could be time to go your separate ways.”

You Can’t Envision A Future With Them

You don’t have to know for sure you’re going to end up with someone forever, but a relationship may not be worth investing in if you can’t envision a future with them at all — whether that future is next week or five years from now. “A great indicator of the health of a relationship is if you get excited for what lies ahead together,” says psychologist Lauren Cook. “If you find yourself not considering the future or even dreading it when it comes to time spent with your partner, this is something to pay attention to.”

Case Study — Trysta, a travel blogger, has always wanted to see the world, but her ex-boyfriend was a homebody. He not only didn’t share her passion for travel; he failed to keep promises that he’d eventually take a trip with her. “I got to the point where I had to accept that we were so different, and it wasn’t fair to him or myself to remain a couple,” she says. “We mutually agreed to end things, and I am now much happier than I have been.”

There’s No Trust In The Relationship

Trust, like communication, should be two-sided. So while you should feel as though you can trust your partner, you should also feel like your partner trusts you. How much they include you in their life can be an indicator.

Case Study — Treva Brandon-Scharf, a life coach and dating coach, says she knew it was time to cut her losses when her boyfriend, a single dad, wouldn’t introduce her to his kids — even after they’d been in an established relationship for months. She saw the move as a vote of no-confidence and a clear message that her partner didn’t want to move forward. “If you find yourself in this position, discuss it,” she says. “You’ll either take the relationship to the next level, or you’ll cut bait and move on. Know where you stand.”

Your Gut Says It’s Not Right

While any feelings of unease in a relationship can be a red flag that things aren’t working out, acts of abuse are absolute dealbreakers. When that happens, you should take care of yourself and leave.

Case Study — Sabrina Victoria, a podcaster in Boca Raton, FL, says she finally left a long-term relationship when she realized her long-term partner’s financial generosity to her was actually a tool he used to control her. “I honestly thought that what I was going through was normal, that I just had to be better or act better and our relationship would get better,” she says. “My advice is that if it doesn’t sit right inside your heart, it isn’t right, and you’re more than likely in a relationship that you need to exit.”