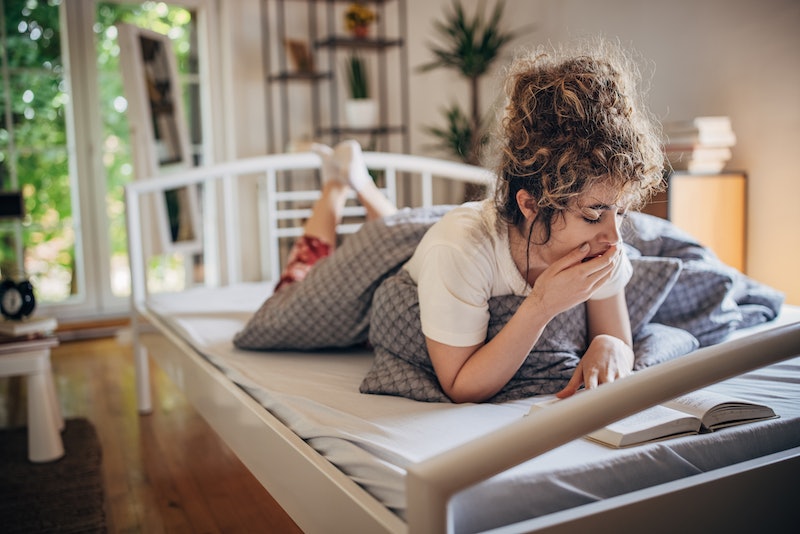 You’re consistently ready to go for 8 a.m. yoga with nothing but OJ in your system, but your bestie can’t speak to anyone until she’s downed 20 ounces of cold brew. “Caffeine doesn’t wake me up,” you insist, but then why does the rest of the world need it to function? The answer could be in your sleep habits — or in the fact that coffee isn’t the ultimate wake-up call you assume it is. Whether it’s an iced Americano or a double-shot espresso so strong it could stand up by itself without a cup, experts tell Bustle that caffeine can only do so much to wake you up in the morning.

“Caffeine makes the brain more alert by playing a role as a central nervous system stimulant inside the body,” Sanam Hafeez Ph.D., a neuropsychologist, tells Bustle. But she notes that its impact on your brain, and on your productivity, has its limits. A study published in Journal of Experimental Psychology: Learning, Memory, and Cognition in 2021 found that when you’re sleep deprived, caffeine can betray you when you need it most. If you’re working long shifts, have a neighbor who likes late-night telenovelas, or just aren’t the greatest sleeper, coffee likely won’t be the morning pick-me-up you really require.

How Does Coffee Help Wake You Up?

Coffee does help alert your brain — at least for a bit. Hafeez explains that caffeine improves your attention, short-term memory skills, reaction times, and how fast you process information. You’ll suddenly be more attentive to the world around you (and less likely to trip over your dog).

“The most noticeable effect of coffee on the brain is not just increased alertness; caffeine can also boost mood and cognition,” Dr. Seema Sarin M.D., head of lifestyle medicine at EHE Health, tells Bustle. She says it increases your heart rate and blood pressure, and releases small hits of the hormones adrenaline, which increases alertness, and dopamine, which is linked to pleasure. And it also works throughout the day. A study published in Frontiers in Pharmacology in 2018 found that caffeine blocks the brain’s receptors for adenosine, a chemical that makes you drowsy.

Caffeine also works if you expect it to work, Hafeez says. It’s common for people to believe that coffee might make you work harder, so after an oat milk latte, you’ll start to push yourself and remain more alert. Even if you think your coffee actually makes you less focused, she says, it still may influence you to churn out those reports rapidly — because you’ll think you have to work against its effects.

“An increase in caffeine intake does not necessarily result in an increased level of alertness,” Dr. Sarin says. Coffee’s effects on alertness and performance look like a rollercoaster: they go up and up and up, and then they crash down. Caffeine might help with all kinds of tasks up to a certain point — but then it stops working entirely.

That effect is particularly pronounced when you haven’t slept well. The study in Journal of Experimental Psychology looked at 276 people who were given cognitive tests, and then randomly assigned to stay awake or sleep through the night. They were given the same tests the following morning, and handed some caffeine to help. The results showed that caffeine helped with simpler problems that just needed close attention. But when it came to more complex cognitive tasks — like if people had to complete a series of steps in order — the coffee didn’t do much, and people made mistakes. When you’ve had a bad night, or are sleep-deprived in general, caffeine’s waking-up magic will only help with the easy stuff, and will wear off fast.

For some people, caffeine’s effects will taper off much earlier than for others. Dr. Sarin says it depends on how much you drink every day, and how long it’s been since you had your last cappuccino. Anything upward of 200 mg of caffeine, she says, will probably not help your alertness or your thinking, but if you regularly drink four espressos a day, you might start to see a drop-off very quickly.

You may also be more productive not because of your caffeine, but despite it. “Research reports that those who use caffeine daily might show increased performance simply because they work against their caffeine dependence,” Hafeez says. The problem is, she says, that dependence on coffee can actually bring your brain down, causing depression, anxiety, and insomnia. Coffee returns your brain to a more normal level of functioning, at least for a while.

So if you stayed up late to marathon The Mare of Easttown, caffeine may not help as you’d like — or not as much as just going back to bed.

More like this
You Probably Walk Asymmetrically. Here's How To Fix It.
By Carolyn Steber
6 Unexpected Causes Of Post-Workout Fatigue
By Carolyn Steber
9 Balance Training Exercises That'll Improve Your Mind-Body Connection
By Carolyn Steber
I Visited Remedy Place, The Social Club Transforming The Wellness Industry
By Rachel Lapidos
Get Even More From Bustle — Sign Up For The Newsletter