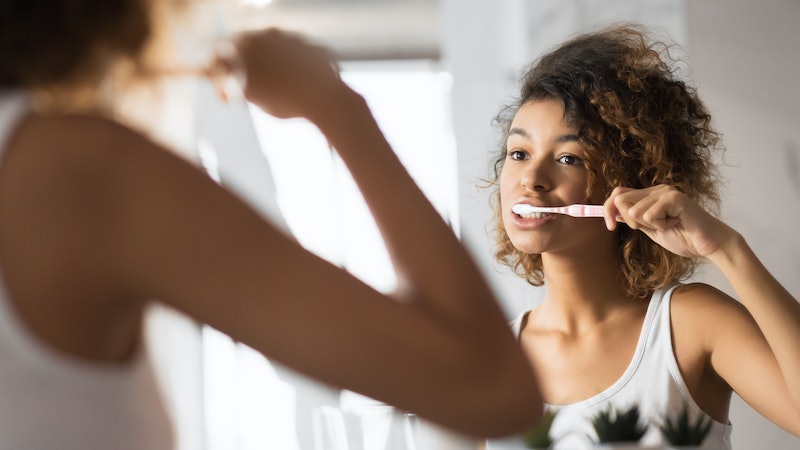 Picture it: You’re standing in the bathroom merrily brushing your teeth when you look in the mirror and notice that your mouth looks a little, well, redder than usual. Maybe your toothpaste is a bit pink when you spit in the sink, too. This is a sign that your gums are bleeding as you brush, and it can definitely be a bit jarring.

On the plus side, it’s actually pretty common for your gums to bleed a little as you go about your dental hygiene routine, says Dr. Ivette Soto, DDS, a dentist based in Denton, Texas. It also isn’t necessarily a dental emergency. In many cases, you can simply take note that your gums are bleeding, aim to brush a little gentler next time, and move on with your life. So really, there’s no need to panic.

That said, healthy gums won’t bleed on a regular basis, says Soto, so if you keep spotting blood in the sink, don’t ignore it. If this is the case, Soto recommends starting with a quick call to your dentist’s office to explain what’s going on. “They may be able to help you through the phone or ask you to come in for a closer look,” she tells Bustle. “Early intervention is always the best course of action, so don’t wait until you’re in pain.”

With that in mind, here are all the reasons why your gums might bleed when you brush, plus what you can do about it.

Why Your Gums Bleed When You Brush Your Teeth

There are quite a few reasons why your gums might bleed when you brush. “If you’re just beginning to experience bleeding gums, it could be caused by something as simple as brushing too hard,” says cosmetic dentist Dr. Joyce Kahng. If you press down on your gums, brush really fast, or use a toothbrush that has stiff bristles, that extra force can damage your gum tissue and make them bleed.

Again, a little bit of blood isn’t necessarily a cause for concern. But if the bleeding is more severe or if it happens all the time, it could be a sign of gum irritation caused by plaque, a cavity, a filling, a crown, or calculus, Soto says. “Calculus is plaque that has been trapped for some time, so it’s hardened up in the gum tissue and is a constant irritant,” she says. “Once gum tissue is irritated and inflamed, it will bleed easily when brushing or flossing.”

Bloody gums can also be a sign of a gum disease like gingivitis, which Kahng says is one of the most common causes of bleeding gums. “Gingivitis is an inflammation of the gums that can be caused by a build-up of dental plaque, poor dental hygiene habits, or certain medical conditions,” she tells Bustle. It can cause your gums to be red, swollen, and painful, and even the lightest brushing can make them bleed.

Another possible culprit? Periodontitis, aka a more severe form of gum disease. “Periodontitis is caused by the buildup of plaque and tartar on the teeth, which can lead to an infection of the gums and surrounding tissue,” Kahng explains. “This infection can cause the gums to become inflamed and to bleed during brushing.”

What To Do About Bleeding Gums

If your gums bleed all the time, that’s your cue to book a dentist appointment. “Your dentist can examine your gums and teeth to determine the cause of the bleeding and recommend the best course of action,” Kahng says. They can treat gingivitis and periodontitis, and send you home with a good game plan.

As with all things dental health, prevention is the best route of action. Kahng recommends brushing your teeth twice a day with an electric or soft-bristled toothbrush, flossing once a day to remove plaque and tartar buildup that gathers between your teeth, and using an antiseptic mouthwash to get rid of bacteria buildup. That, along with regular dental checkups, should help keep your teeth and gums healthy so your mouth is less likely to bleed.