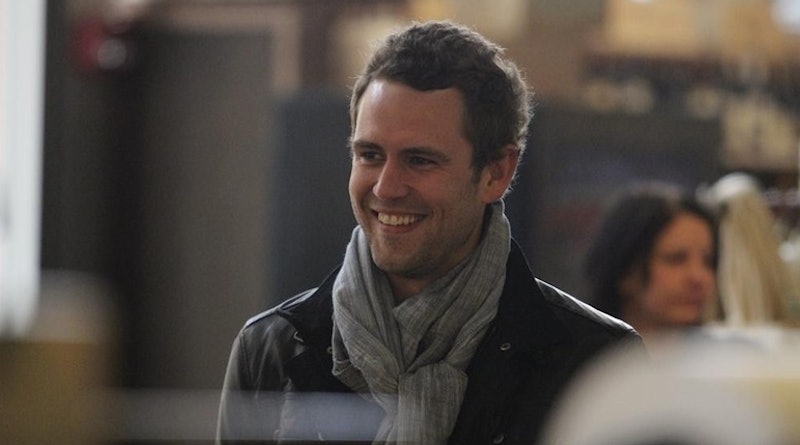 This season of The Bachelorette is coming to a close on Monday night — a true bummer if you're as obsessed with Kaitlyn Bristowe in all her awesomeness as I am — and I'm going into it expecting to experience a fair amount of deja vu. After all, this is something we've all seen before. This time last year, Nick Viall was hoping that Andi Dorfman would decide to spend the rest of her life with him, and this time, it's Kaitlyn who he's in love with. It seems pretty similar, right? Just like last year, Nick's survived Kaitlyn meeting his family and the Fantasy Suite dates (even if he wasn't present for the entire season), and just like last year, he's made it to the final two. But if you ask me, that's about all Nick's appearance on The Bachelorette this time around has in common with the 2014 season. In fact, Nick's relationship with Kaitlyn is way different than the one he shared with Andi, and it's definitely for the better.

I faithfully cheered Nick on last year, hoping that Andi would pick him over Josh Murray, and she didn't. And then, After The Final Rose happened, and after Nick called Andi out for sleeping with him, I was no longer his biggest fan. But through his time with Kaitlyn, it's obvious that he's turned over a new leaf, and I think they'd be lucky to have each other — especially with the crazy chemistry they already share.

Because let's face it: Nick and Kaitlyn are a way better fit than Nick and Andi ever were, and it's probably because his experience on The Bachelorette made him a way better person.

His Family Can See A Difference Between Them

He's Learned From His Past Mistakes

The whole ATFR thing last year was a big deal — I'm pretty sure we can all agree with that. But since then, Nick seems to have matured, and he's approaching his second time on The Bachelorette (and, consequently, the time he spends with Kaitlyn) more like an adult. Thanks to his missteps last season, he seems to have finally found his chill, and it's only made his growing relationship with Kaitlyn better.

He's More Secure In His Relationship With Kaitlyn

Nick seemed to make a point of breaking the rules on Andi's season to get ahead in the competition, or to get her attention, but he knows it's not necessary. If you have to work double time to get someone to like you, it's not worth it, and with Kaitlyn, he's not trying his old tricks. He didn't sneak to her hotel room by lying to the front desk about being her husband like he did with Andi; instead, he waited to be invited up, and the invitation did come. He didn't waste time trying to steal her away from the other guys; Kaitlyn usually went willingly if he mentioned he wanted some time alone with her. I'm a firm believer in the idea that when a relationship works, you don't have to convince or the other person into spending time with you, and that's not happening here.

Anytime Andi talked about Nick last season, it was always about how much passion there was between them. And for Kaitlyn, the chemisty is definitely one of the things she loves most about him, but she also brings up how much she loves talking to him, especially when he confided in her about his church upbringing. They're honest and open with each other, and it proves that their relationship is on solid ground — well, as solid as any relationship founded on reality television can be.

If Kaitlyn ends up choosing Nick during Monday night's finale, I have no doubt that they'll be very happy together, whether that happiness lasts a year or for the rest of their lives.