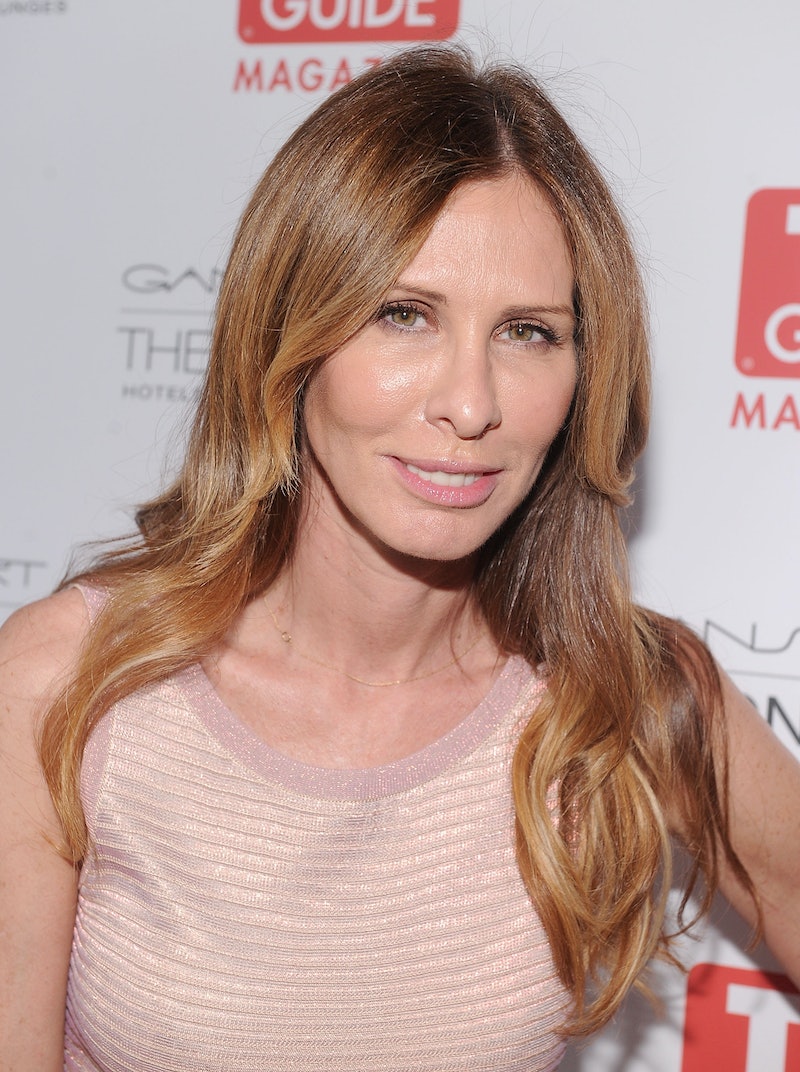 There's no cast member of The Real Housewives of New York City who is quite as calm and cool as Carole Radziwill. However, during last Tuesday night's episode, the usually laid-back and put-together Real Housewife was incredibly emotional. That's because she was about to jet off to London with castmate Dorinda Medley to pick up the ashes of her late husband Anthony Radziwill from their final resting place at a church that was about to be torn down.

Anthony passed away in 1999, so Carole has had some time to cope with her grief, deal with her emotions, and eventually find peace. However, getting this call out of the blue after 15 years has brought Anthony back into Carole's life and seems to have caught the "all play and no work" Real Housewife a bit off guard. Buckle up, ladies and gentlemen, because this coming Tuesday night's episode is going to be a Ramotional roller coaster ride for us all. And yes, you will need to have tissues handy.

Of course, Carole's sadness is not only expected but understandable. Any wife would become upset while thinking about her late husband. Anthony was quite the remarkable man, and it seems like Carole is truly grateful for having gotten the few years that she did to spend with him. Read on, and you'll see why.

1. Anthony Was Gone Too Soon

Anthony passed away from cancer on August 10, 1999 in New York one week after his 40th birthday. Senator Edward M. Kennedy of Massachusetts delivered the news publicly. Carole went on to detail Anthony's life and death, and how she dealt with it all in her 2005 best-selling memoir What Remains . If you find what's been happening on RHONY lately heartbreaking, Carole's book will leave you downright devastated.

2. He Was Carole's Prince Charming

Luann de Lesseps may be a countess, but Carole one-upped her by marrying a real-live prince. That's right. Anthony was the son of Prince Stanislas Radziwill of Poland, which made him a prince, too. Prince Stanislas lived in London in the later years of his life, which is also where Anthony grew up. When Prince Stanislas died in 1976, his remains were laid to rest at the same church Anthony's ashes were eventually placed.

2. He Was American Royalty

Not only was Anthony actually royalty, but he was also a part of one of the most famous American families ever: the Kennedys. Anthony's mother is Lee Radziwill, the younger sister of Jacqueline Kennedy Onassis. That made Jackie O. and President John F. Kennedy Anthony's aunt and uncle, and John F. Kennedy Jr. and Caroline Kennedy his cousins.

Anthony and Carole were very close to JFK Jr. and his wife Carolyn Bessette, who was actually Carole's best friend. JFK Jr. and Carolyn, along with her sister Lauren, died tragically in a plane crash in 1999, less than a month before Anthony passed away. Carole revealed during last Tuesday night's episode that period of three weeks was the most difficult time in her life, and it's easy to understand why.

4. He Was Kind Of A Big Deal In Journalism

Anthony didn't rest on his laurels and let his upbringing do the work for him. He used talent and hard work to have a successful career in journalism. After graduating from Boston University with a degree in broadcast journalism in 1982, Anthony went on to become an associate producer for NBC Sports and produced Emmy Award-winning work for the 1988 Seoul Summer Olympics, according to his obituary in the Los Angeles Times. He joined the ABC News team in 1989 as a producer for PrimeTime Live, where he worked closely with Diane Sawyer. While there, Anthony won the prestigious George Polk Award in 1993 as part of a team that produced an investigative piece on the rise of neo-Nazism in America. Anthony then became Vice President for documentaries at HBO in 1997. After Anthony's death, Lee and Carole established a fund in his name to give annual stipends to an up-and-coming documentary filmmaker for his or her exceptional documentary feature as part of the IFP Gotham Awards. That certainly sounds like a fitting honor.

Anthony's job as a journalist wasn't always glamorous. Anthony was part of a lawsuit where a flight attendant claimed he recorded their conversation without her knowledge. She claimed Anthony airing part of the interview constituted eavesdropping and an invasion of privacy. A federal appeals court dismissed the case in 1997, which was a win for Anthony and for journalists all over, as well.

6. He And Carole Had An Office Romance

Like many people, Carole and Anthony met on the job, and in the least romantic way possible, too. Carole and Anthony were both working for their respective ABC News programs covering the case of Lyle and Erik Menendez, who gained national attention in 1989 for murdering their parents in Los Angeles. Here's how Carole describes hers and Anthony's lives as journalists on her official website:

We had so much fun in those years. We were young and we both loved the news. It was an exciting and heady time to work in television news and we couldn’t get enough of it. We were lucky to have careers we were so crazy about. It felt like one long series of adventures. Sometimes we were assigned to the same stories, but most often we were not, and while that meant we were away from each other for periods of time, it also meant we were wildly excited to see each other – we loved comparing stories. We talked on the phone for hours when we were apart, telling each other everything.

Yeah, that sounds pretty magical. If only this fairy tale had a happy ending. But, at least Carole has gone on to live a happy, healthy life surrounded by friends and loved ones. I'm sure Anthony would be glad for her.